A Tale Of Two Cities

From his apartment on Paris’s Left Bank to his classically modern D.C. home, Thomas Pheasant is a master of understated design. 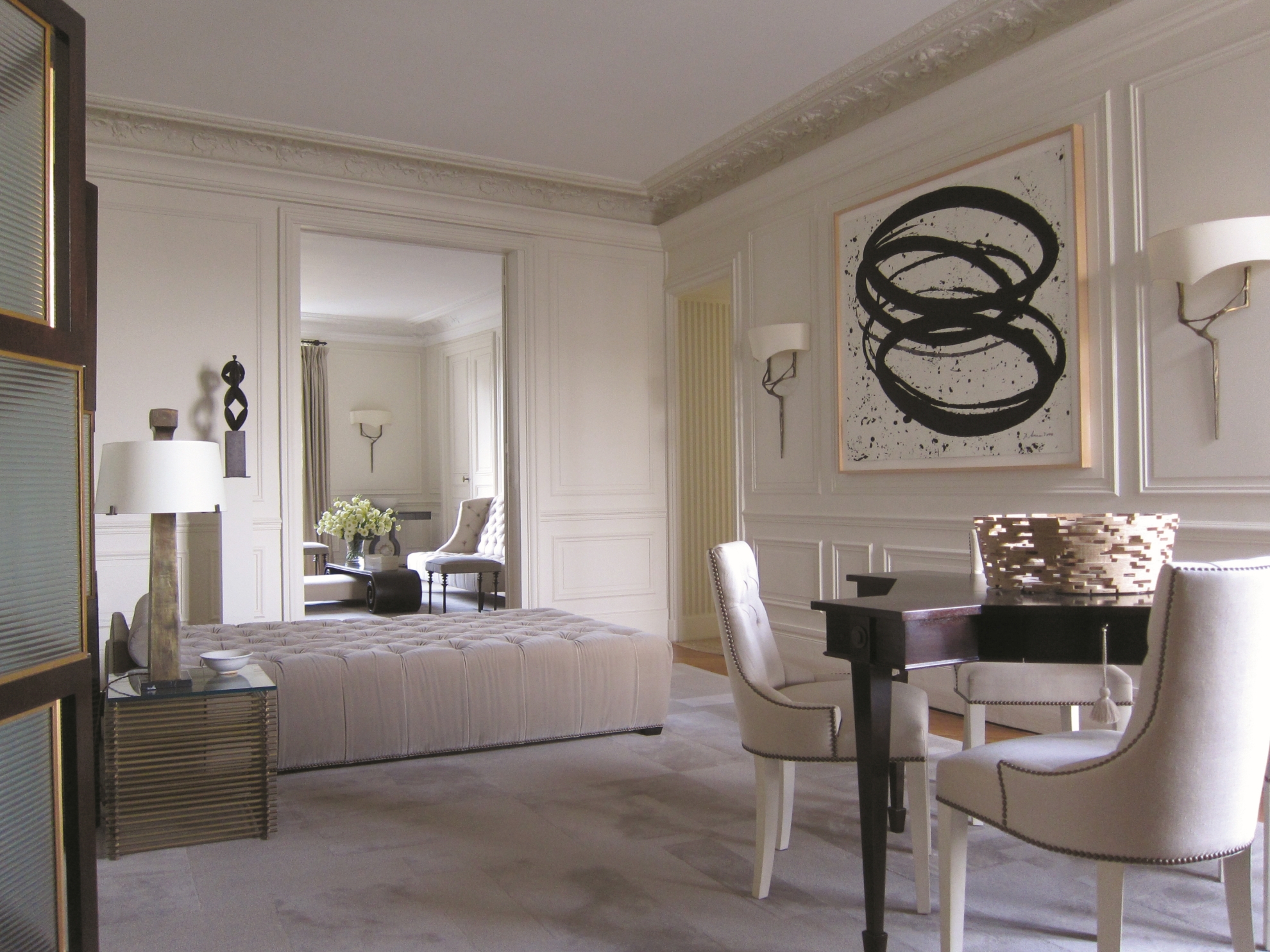 In the living room of his Paris apartment, Thomas Pheasant included a curated mix of materials, shapes and textures, such as the angular game table from Thomas Pheasant STUDIO. The sculptural Felix Agostini sconces speak to the designer’s idea “that every piece in a room should celebrate form.”

If ever an interior designer elevated the use of neutrals to an art form, that designer is Thomas Pheasant. Forget any preconceptions about beige spaces being staid or emotionless. Pheasant can turn an off-white room into a visually rich and exciting environment. He proves it here with two homes of his own, his apartment on Paris’s Left Bank and his house in Washington, D.C.

Pheasant, who describes his design aesthetic as a “modern evolution of classical style,” always lets the location direct the design. When it came to his Paris apartment, which he uses as a “place to breathe, reflect and get inspired,” the city’s limestone facades, gray roofs, and black iron railings inspired the architectural details and the gray and stone palette he brought into the apartment. Angular furniture, such as the Thomas Pheasant STUDIO game table in the living 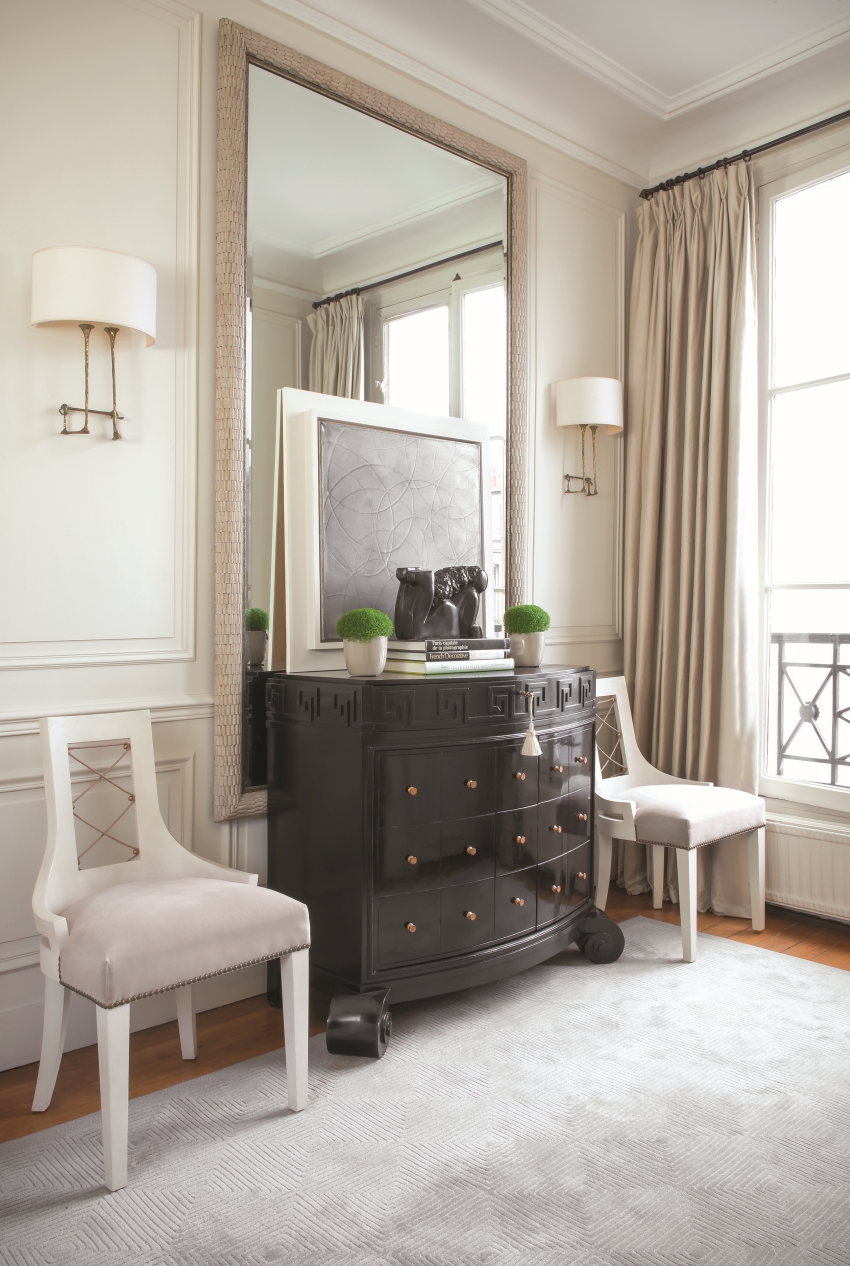 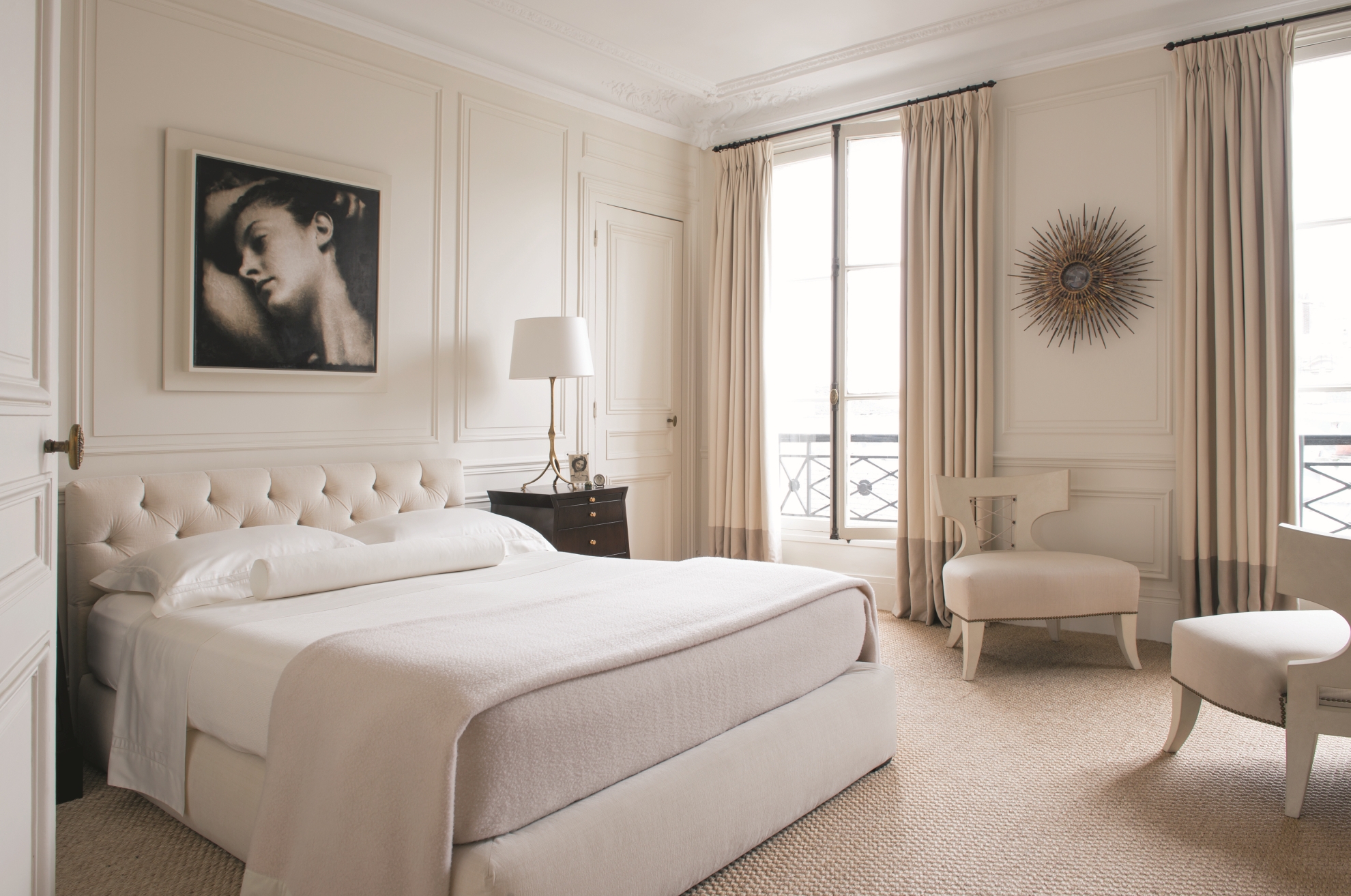 In the bedroom, says Pheasant, “the serene beauty of the woman’s face” in the Colby Caldwell photograph adds the perfect mood, and the artwork’s dark background brings “focus and dimension to the neutral surface on the wall.”

In the entry hall, which features an amazing view across the Seine to Sacré-Coeur, an oversized mirror temporarily placed behind a striking black cabinet quickly became permanent. Pheasant’s c. 1995 Tassel chairs and Felix Agostini sconces complete the chic look. In the bedroom, a pale palette is highlighted by natural light from the window, exuding tranquility, while a Colby Caldwell photograph adds a serene grace note. It’s no wonder the designer and his partner use this residence for inspiration and escape.

Pheasant’s four-bedroom D.C. house, located just outside of Georgetown near his studio, comes with a pool house and garden that are often shared with family and friends. Despite the home’s unabashed elegance, it offers a sense of comfort and ease and serves as a fantastic display of Pheasant’s work. “Most of the pieces in 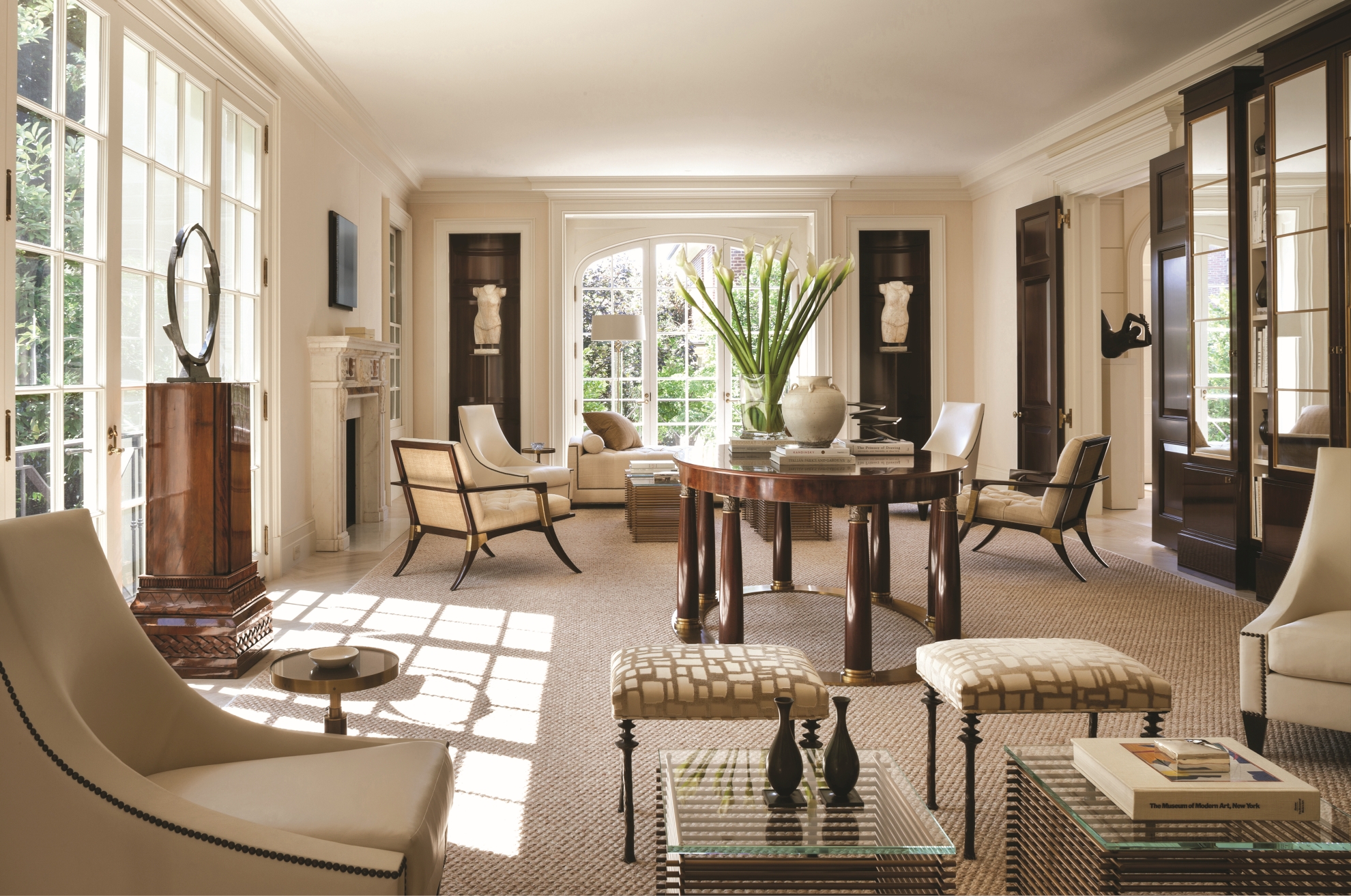 In his elegant Washington, D.C. home, says Pheasant, “I wanted to create a modern classical background for my furniture designs.” The designer’s Bel-Air lounge chairs perfectly complement his stacked cocktail tables, while in the background, his Paris chaise and tufted Athens chairs are a study in form and function. 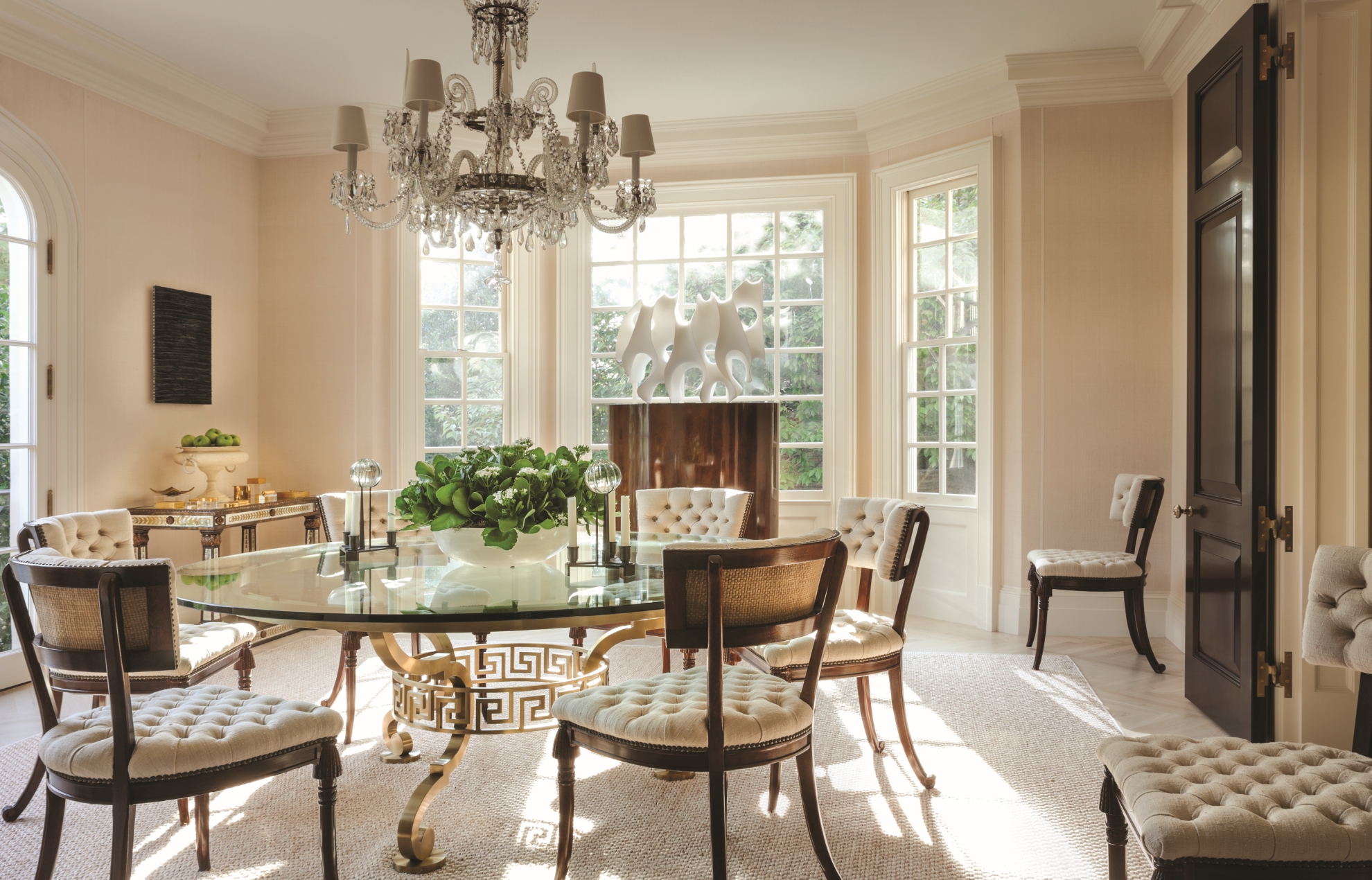 Pheasant designed the round bronze dining table specifically for this room and paired it with Regency dining chairs he found in Paris. He upholstered both the chairs and the walls in an ivory woven fabric to add a sense of warmth.

the living room and the rest of my home are my designs. They tell the story of my personal journey over the years,” he says.

From his Paris sofa designed for Baker in 2005, to the Bel-Air lounge chairs from 2008, and a variety of custom pieces, the beautiful, tailored grouping in the living room shows just how well Pheasant’s collections work together. A circular bronze by artist Bruno Romeda and 1930s Chinese carved figures in the rear niches form artful focal points, while a stately, tall round table centrally placed serves visually to divide up the expansive living room. “Sculptural form, contrast, simplicity…it’s what I love,” explains Pheasant.

In the sun-filled dining room, Pheasant showcases his admiration of classical elements mixed with modern ideas. A custom round bronze dining table, an antique Baccarat chandelier, and a contemporary sculpture by Eva Hild work together beautifully. The foyer, which showcases Pheasant’s deft hand and modern classical spirit, is described by him as “the perfect summation of my point of view.” It’s a point of view worth sharing. 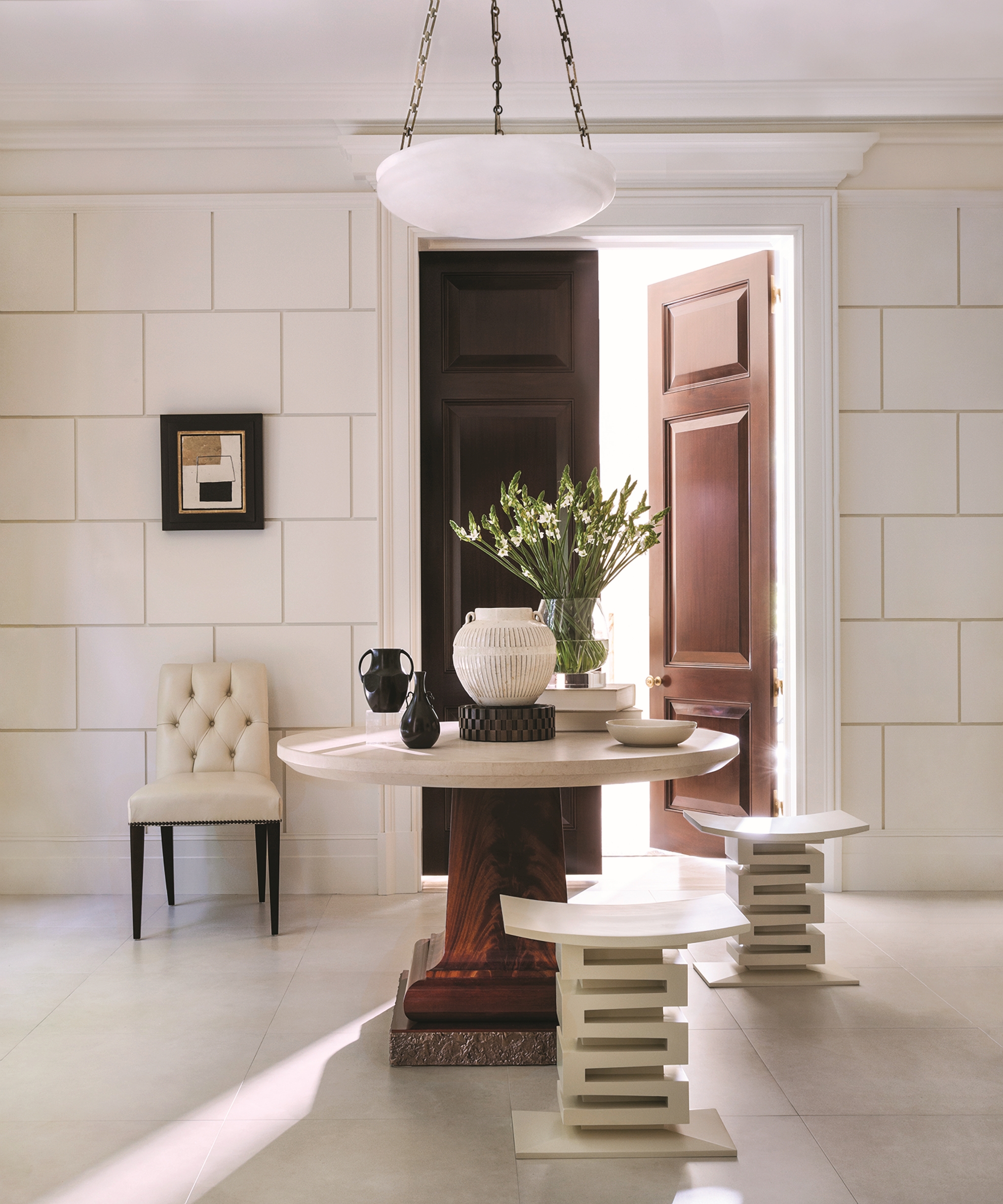 In the foyer, Pheasant paired Thassos stools from his Baker 2012 collection with a recent, custom-designed sculptural pedestal table.