For a Manhattan couple that loves the arts, moving to 3 Lincoln Plaza had a dual attraction: The building is integrated with the performance halls of Lincoln Center, to the extent that the quickest way to reach the music is by an escalator in the apartment building’s lobby. The residential tower is also the neighborhood’s tallest in which one can buy, not just rent, an apartment. When one became available on the 47th floor, the couple snapped it up. Then they called Ron Marshall, the Connecticut-based designer who had already completed a number of homes for the family. 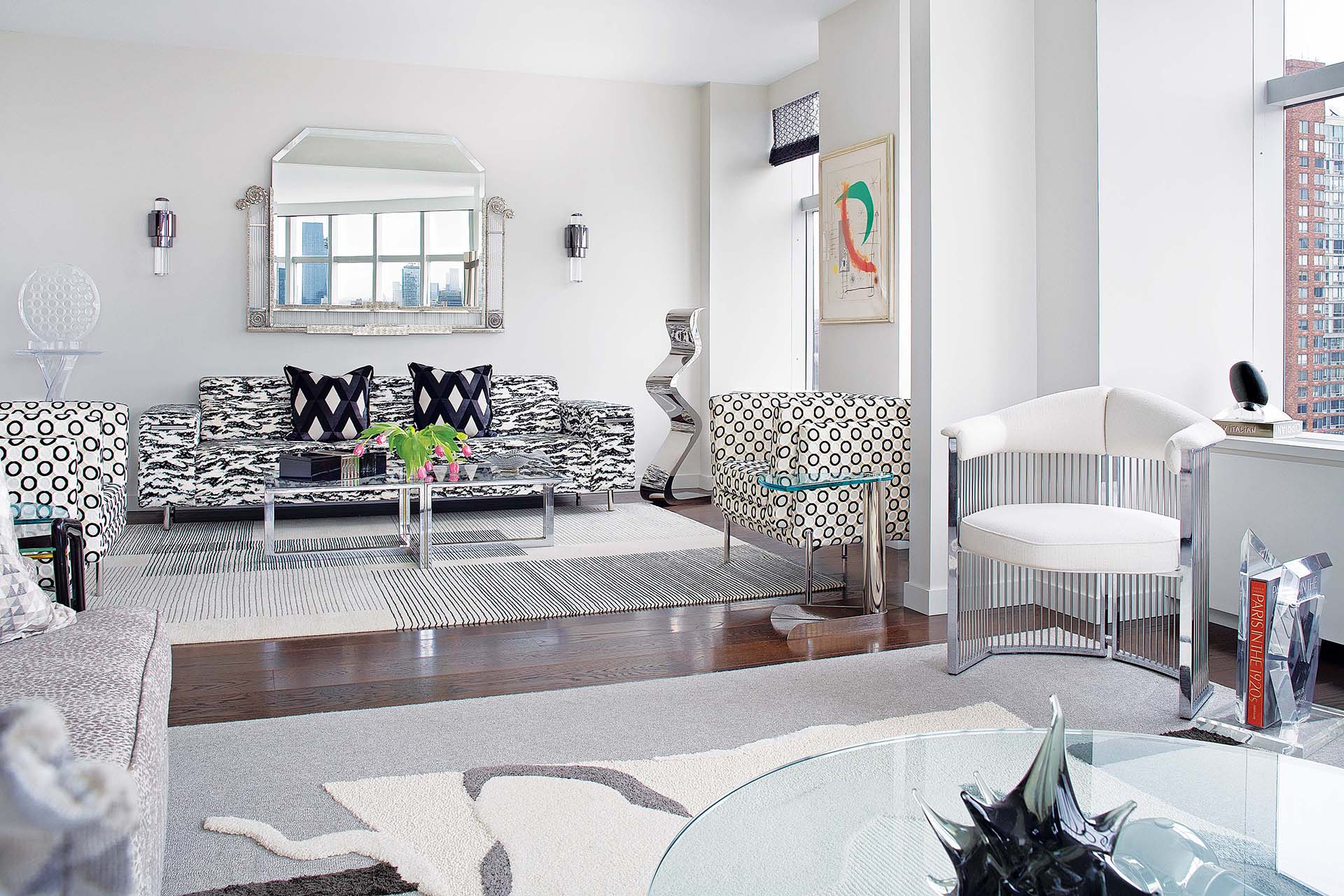 Within the confines of a black-and-white palette, Marshall didn’t hesitate to mix bold patterns in upholstery fabrics and rugs. While the furniture is all new, he integrated original Art Deco mirrors and light fixtures that hark back to the luxury and modernity of early 20th century New York. A few color accents are provided by a Calder lithograph, the spine of an art book and a spray of fresh tulips.

"The apartment was nondescript and aging," explains Marshall. "So we decided it would be a gut job." One of his master strokes was to take down a bedroom wall, creating a sweeping living space that took full advantage of the continuous wall of windows.

As with any custom construction project, adjustments were made along the way. "The husband asked me to redesign the kitchen island with an end overhang so that he could see the Hudson River while eating," he says. That’s now considered "one of the best seats in the house," although frankly, there are no bad seats. 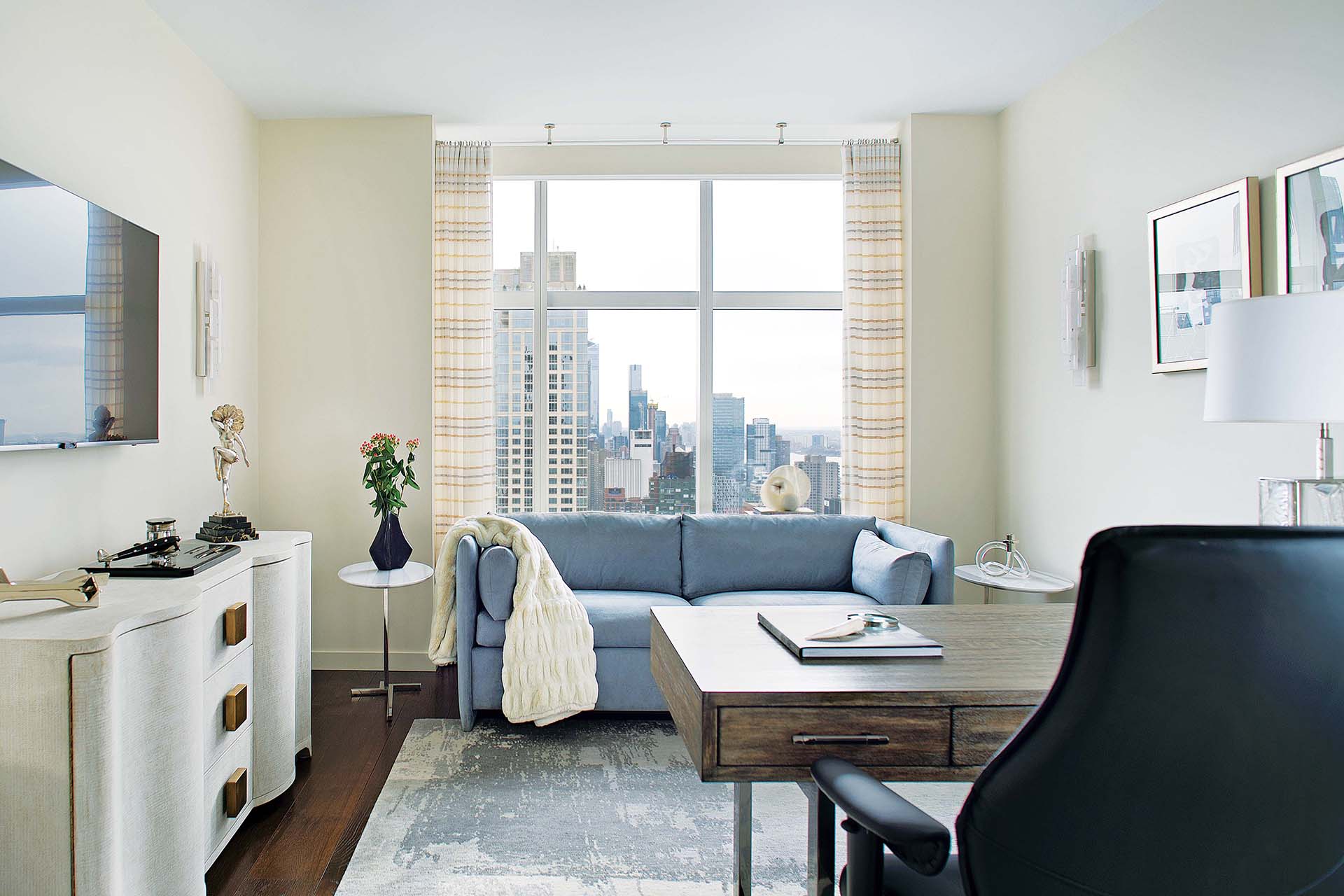 In an office-cum-bedroom, original Art Deco pieces mingle with contemporary art and accessories. The furniture and rug are from Safavieh.

Marshall’s next feat was to furnish the home with a unified sense of place. He did that, in part, by evoking Art Deco—and not by adding replicas, but by acquiring original mirrors, sconces, table lamps and statuary from the 1920s and ’30s. These provide a stylistic link to the luxury and modernity of early 20th century New York. 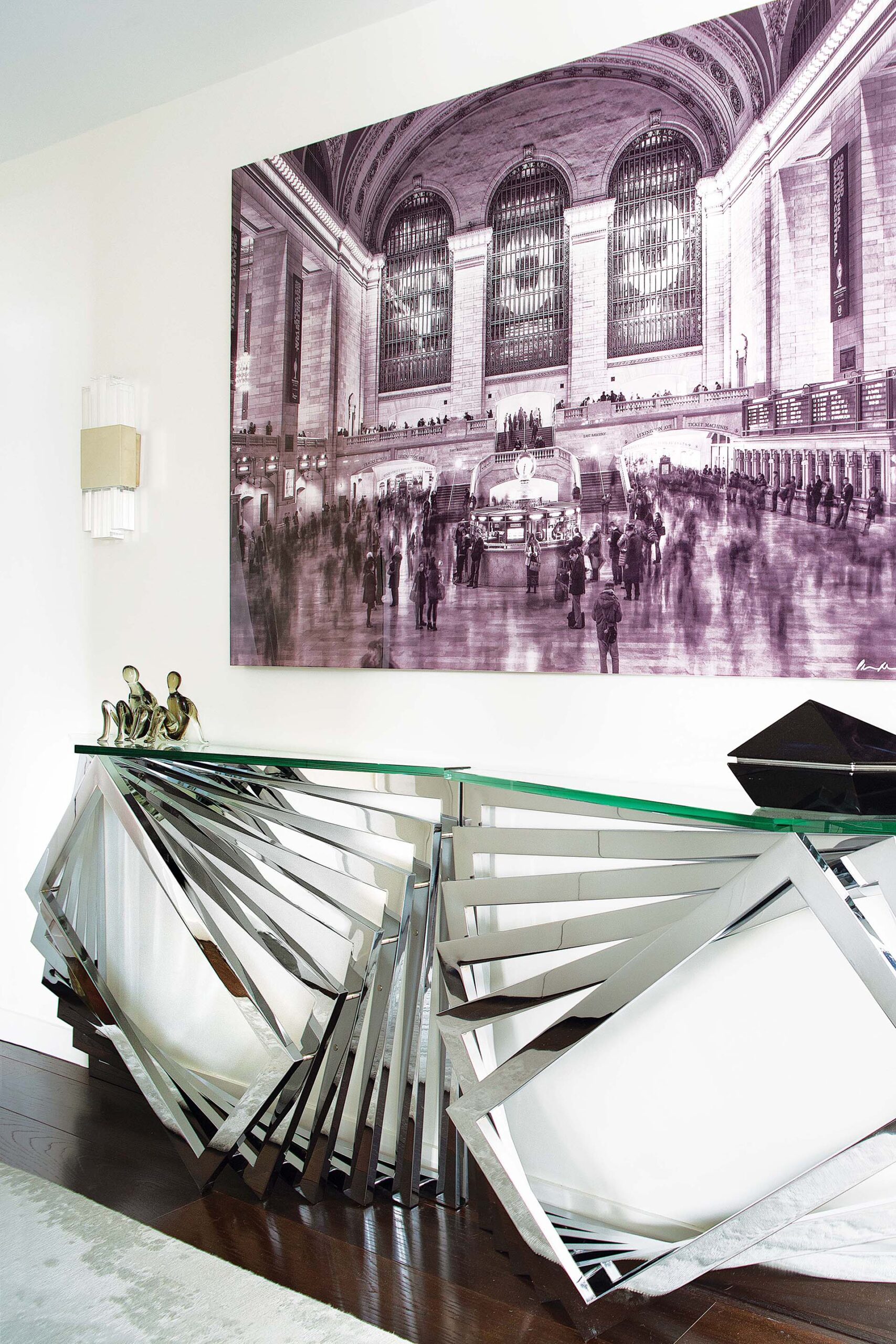 In the foyer, Marshall placed bookend consoles side by side to create one long piece that has the energy of a kinetic sculpture. The large photograph is of Grand Central Terminal.

The furniture, which is from Safavieh, is new and carefully selected to echo a bygone era without seeming antique. Examples include chrome bookend consoles in the foyer, placed together to form one long piece that looks like a kinetic sculpture in its own right, and a bedroom set from Safavieh’s Phantom Collection by Selva of Italy. 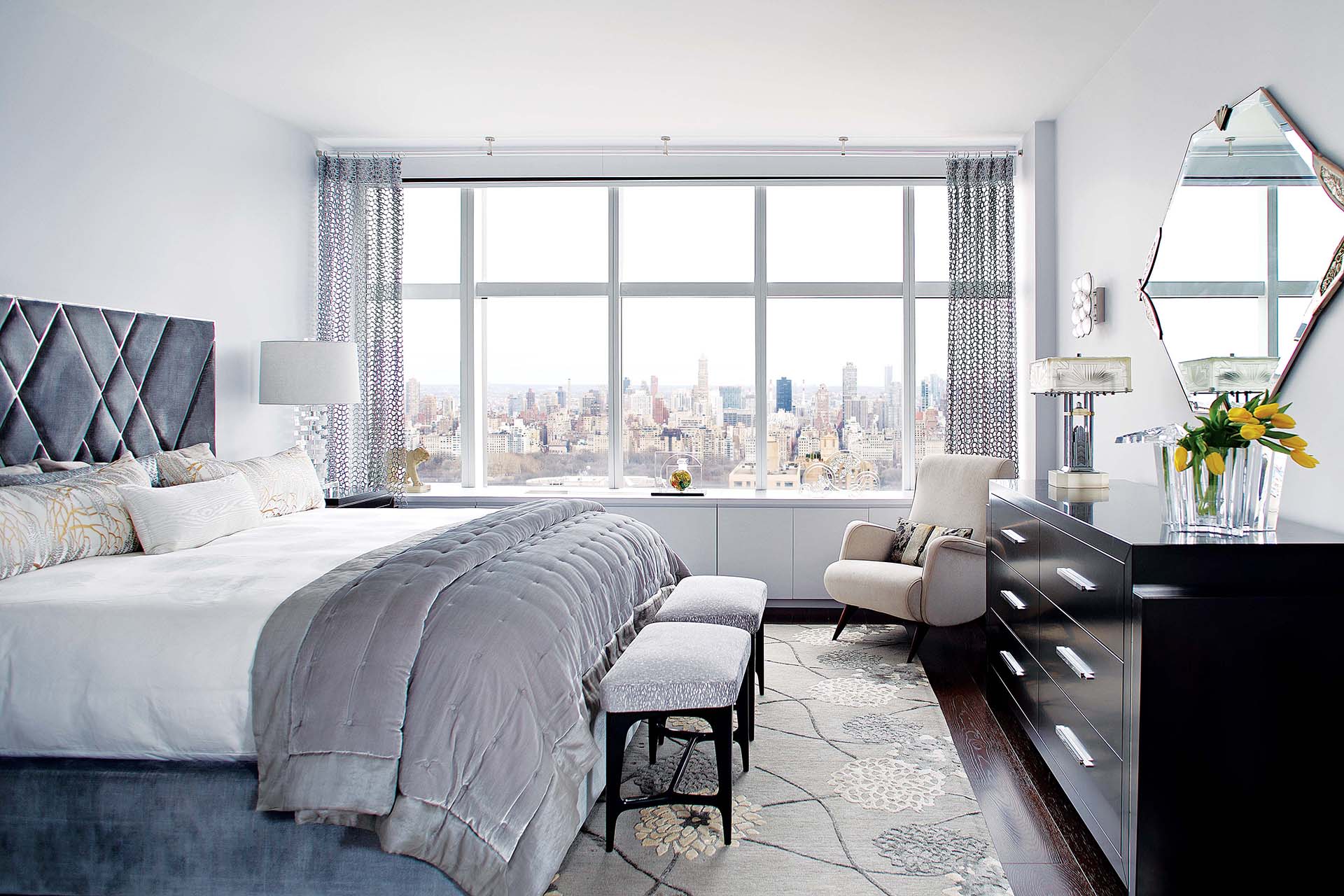 The primary bedroom, features pieces from Safavieh’s Phantom Collection, made in Italy by Selva Timeless. The frosted glass table lamp atop the dresser is an early 20th century original. Looking south from the window, one can see Bryant Park exactly one mile in the distance.

Marshall used a restrained palette of black-and-white, silvers and grays. When it came to choosing fabrics and rugs, he didn’t shrink from pattern. Bold geometrics, updated animal prints and stripes coexist in unexpected harmony. These patterns imbue the living space with a subtle rhythm and fairly pulse with energy, much like the performance spaces of Lincoln Center, which are just an elevator and escalator ride away. 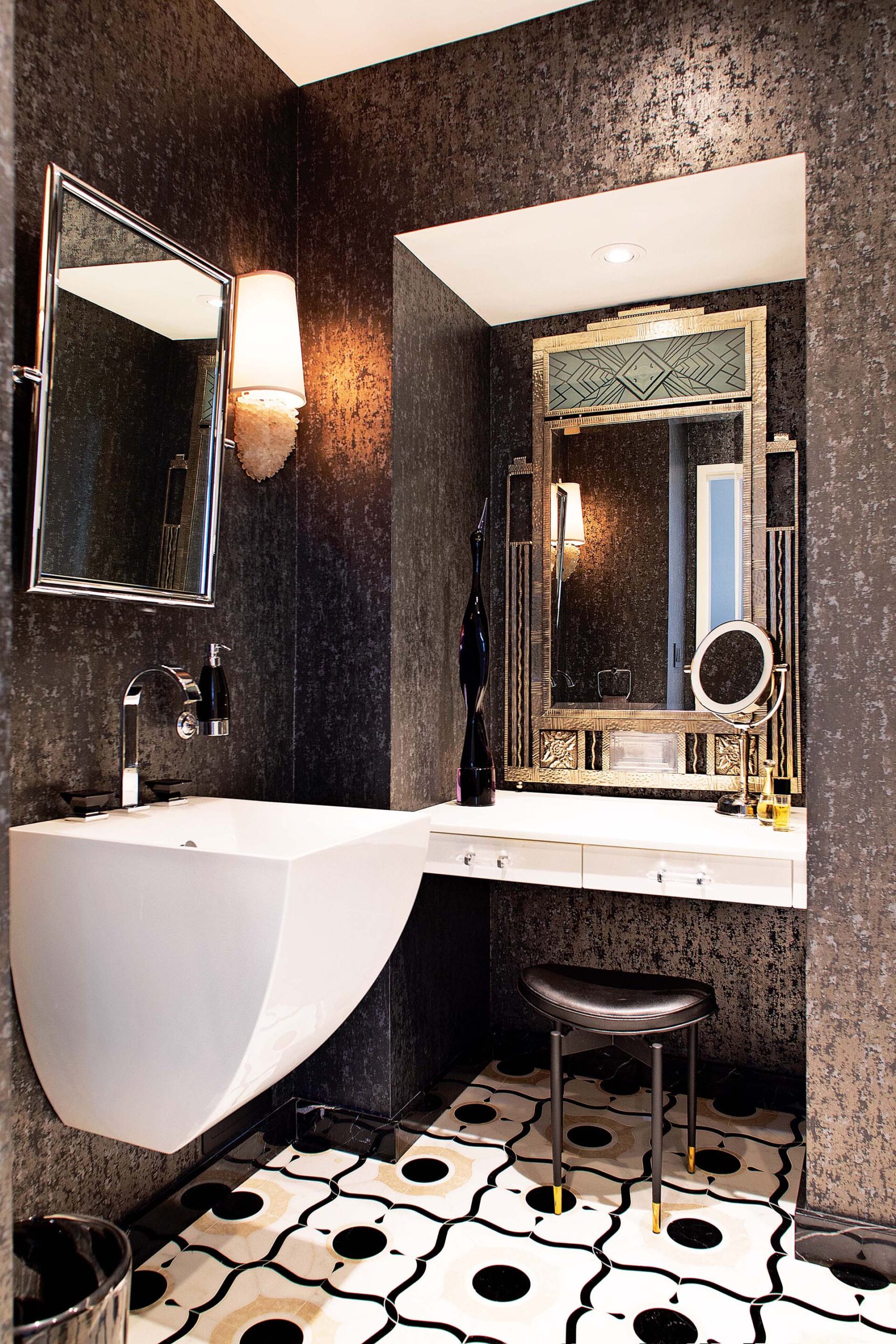