Built on the ruins of a storied estate, a new home makes the most of its waterside setting.

One of the great legal minds of the early 20th century, William D. Guthrie lost many of the causes he took on, notably the fights against a federal income tax and the Prohibition amendment. But he succeeded in amassing great wealth as counsel to the Rockefeller family, and he used that wealth to build Meudon, a splendid estate of 80 rooms and 300 acres on Long Island’s Gold Coast. Guthrie and his friend John E. Aldred, who built his estate nearby, bought and demolished 60 homes and stores—essentially the entire Village of Lattingtown—in order, as Aldred put it, “to get the view we wanted.”

In the living room, transitional furnishings from Safavieh provide an ideal setting for the owners’ art collection.

The view of Long Island Sound and the Connecticut shore beyond remains spectacular today, although Meudon itself is long gone. Guthrie’s widow died in 1958 at age 100; two years before her death, the contents of Meudon were auctioned, the house demolished, and much of the land developed as subdivisions.

Built in the Shingle style, this new home is laid out to maximize views of Long Island Sound. The terraced stairs are a vestige of Meudon, the original Gilded Age estate on this site.

Spared this fate was the central axis of terraced gardens sweeping down to the Sound. In recent years a family purchased this land and erected a new Shingle-style home—large by today’s standards but dwarfed by Guthrie’s original mansion. The new owners needed to buy and raze only a single structure that stood between them and the Sound. Now they are, in a sense, standing on Meudon’s shoulders, enjoying world-class Gatsby-esque views from nearly every room.

Situated in one of the home’s two turrets, the breakfast area offers panoramic water views. In the kitchen and butler’s pantry beyond, light-stained oak is paired with white wood cabinets, a combination that echoes the kitchens of Meudon and other great estates of the Edwardian era.

While different in architectural style than its predecessor, the new house, expanded and enhanced by architect Michael Jay Wallin, has even earlier Gilded Age references, including McKim, Mead & White’s Newport Casino and the quintessential “seaside cottage” in the Shingle style, Peabody & Stearns’ Kragsyde. With its emphasis on horizontal continuity, both in outside detailing and the flow of interior spaces, the Shingle style was the perfect 21st-century choice to suit the terraced land of Meudon and maximize views of the Sound. 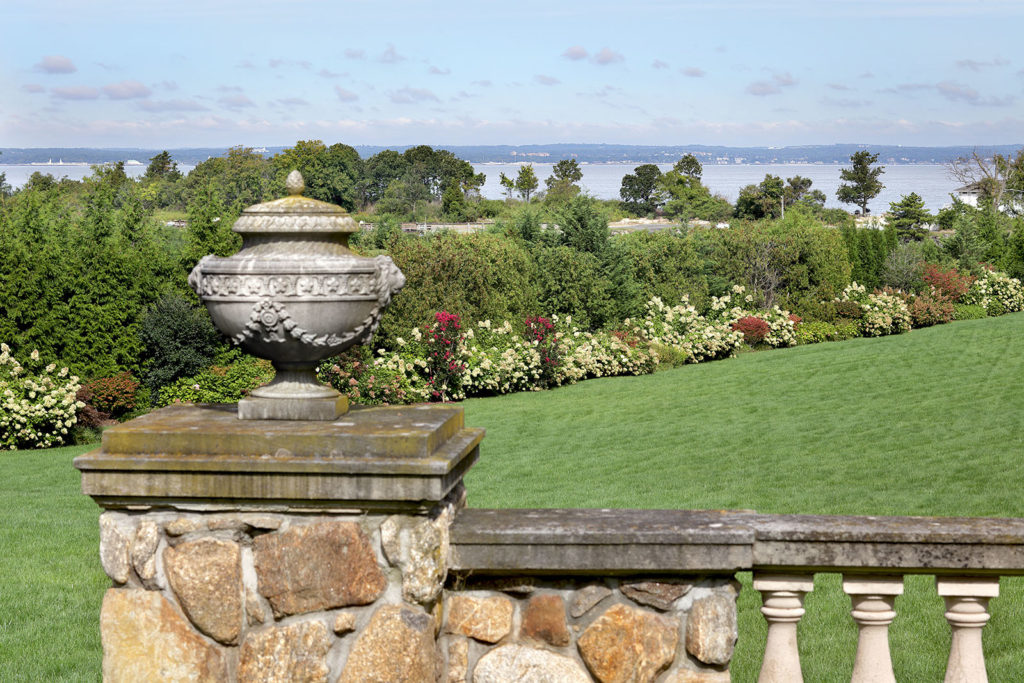 A terrace overlooks acres of manicured lawn rimmed by hydrangeas, beyond which can be seen Long Island Sound and the Connecticut shoreline. The stonework in the foreground survived the demolition of the original estate.

Inside the house, the décor is more homey than opulent. The living room is furnished by Safavieh in today’s tailored transitional style, which creates an ideal setting for the owners’ collection of contemporary art. The room that comes closest to Gilded Age formality is the dining room, with its hand-blocked Gracie wallpaper, bombé sideboard and Venetian glass mirror. At the other end of the design spectrum and the far end of the house, the family room is country house casual, with its tall fieldstone chimney and hewn oak trusses towering over comfortable upholstered chairs and sofas placed on an antique Persian rug. This is where the family’s two outsized Labrador retrievers can usually be found lolling about. 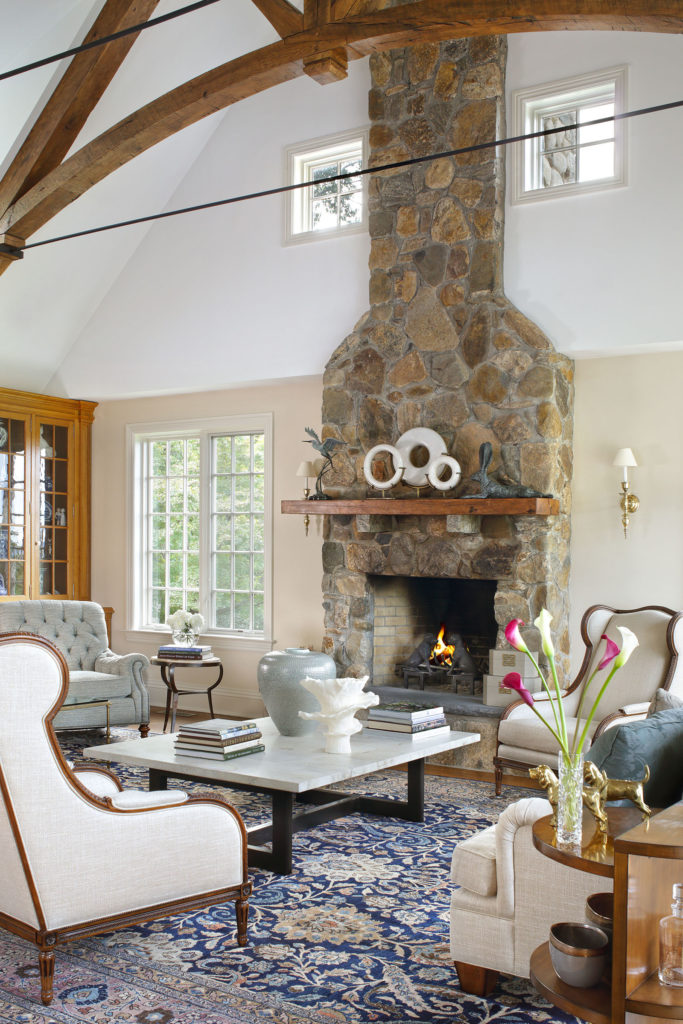 In the family room, a favorite haunt of the family dogs, a more casual, country style prevails. The antique Persian rug is from Safavieh, as are all the furnishings.

Some would call this house the product of a new Gilded Age. But what comes around twice never comes around the same. The new mansion on this site feels intimate and unpretentious, reflecting the laid-back lifestyle of the family that lives here. 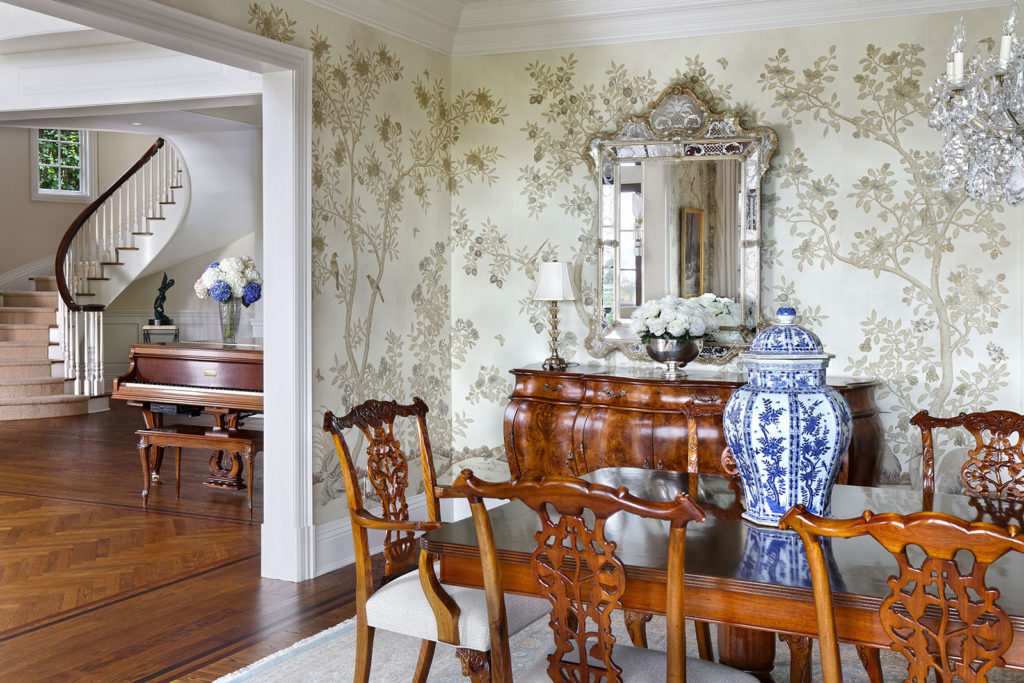 With its elegant Gracie wallpaper and 18th-century style furniture, the dining room is the most formal setting on the first floor. In the entrance hall beyond, a piano, flowers, sculpture and staircase form a balanced tableau.