The Siren Call of Lake Como

In a world where the term “luxury” seems to be losing its meaning, there are still a handful of hotels where it applies. Villa d’Este, dramatically set on the southwestern shore of Lake Como in northern Italy’s Lombardy region, is one. This remarkably youthful dowager has superb Renaissance architecture and a staff that rivals that of any other hotel in the world. What I find remarkable about Villa d’Este is that its history is deep and authentic, not recreated. It was built in 1568 by Cardinal Tolomeo Gallio as his own residence, back in the days when the church had not only all of the power but all of the money as well. It changed private hands several times over the centuries, in 1873 becoming a hotel, a retreat for well-to-do Victorians. Hollywood came calling in 1925 in the person of a young Alfred Hitchcock, who made his first film, The Pleasure Garden, on its grounds. It’s an apt title for a place where I felt like a guest at a private villa, with a staff that anticipated my every need. I found Villa d’Este full of guests seeking old-world glamour, knowing they wouldn’t be bothered but assured that they would be artfully cared for.

A veritable redoubt for the rich, it has the feel of old money—though not all the money here is old. Just this past August, both Bruce Springsteen and Robert DeNiro were in residence, and it’s not uncommon to spot the lake’s most famous residents, George and Amal Clooney, dining at The Grill. The interior is a riot of marble, lush fabrics and antique furniture, the hallways festooned with portraits and sculptures. The spacious guest rooms and their tall windows are edged with silk brocade drapes and have extraordinary lakeside views that also take in the 25 acres of gardens Villa d’Este is set on. This stage set, utilizing regal gold, royal blue and deep red, is complemented by acres of manicured gardens filled with azaleas, jasmine and succulents. 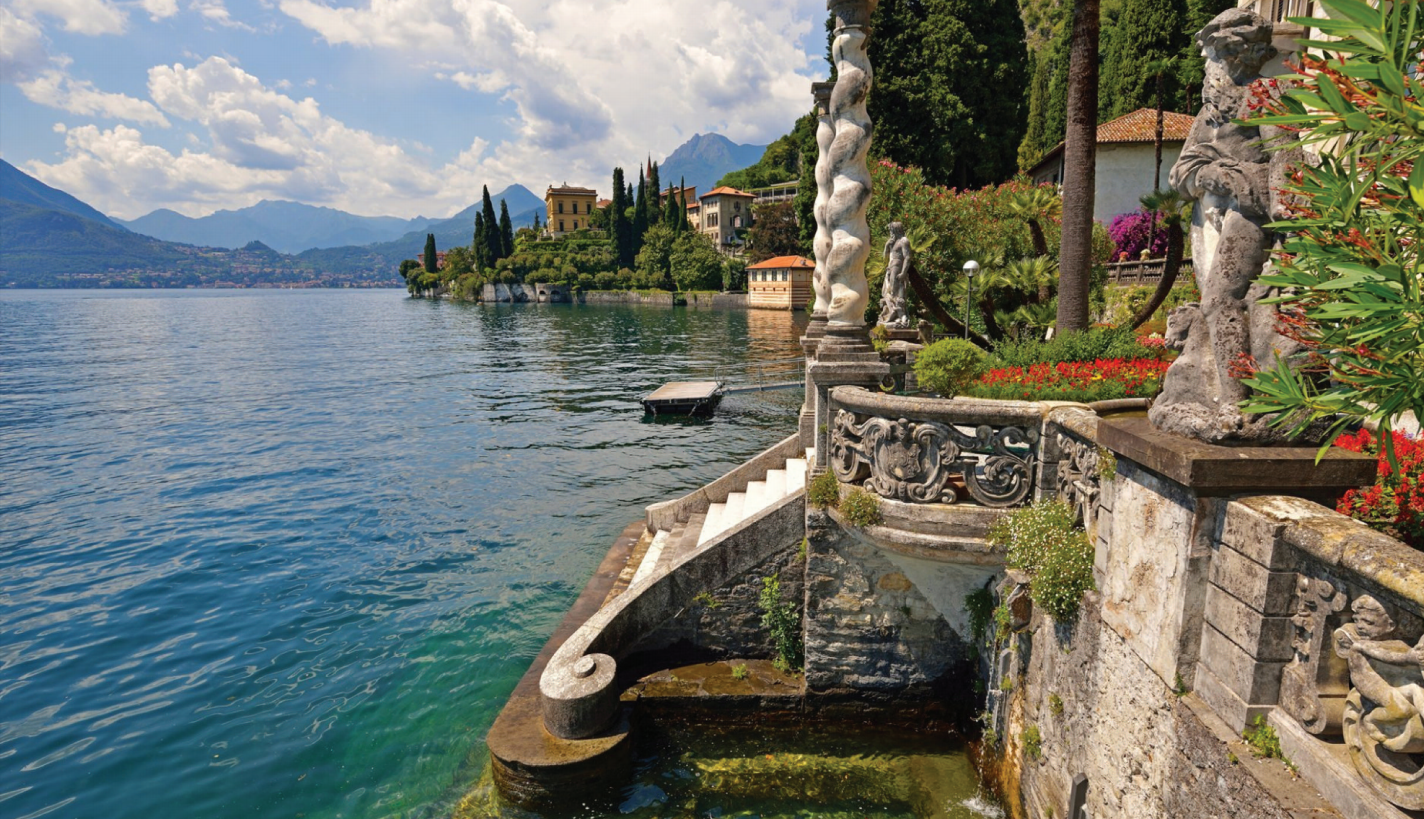 The lavish gardens of Villa Monastero hug the lakeside.

I would stroll the pebbled paths through the gardens in the morning, and then take an excursion on the lake, which is crisscrossed by ferries. I like the city of Como itself, a short distance away, mildly bustling and filled with shops and glimmers of Roman ruins, as well as one of the country’s most impressive cathedrals. But I love the smaller towns on the lake, places like Varenna, with its steep medieval stairs and the lovely garden of Villa Monastero. Each day, by the time the hot sun began to slide behind the mountains toward Switzerland, I was back at the hotel. Leisure is the major pursuit at Villa d’Este. 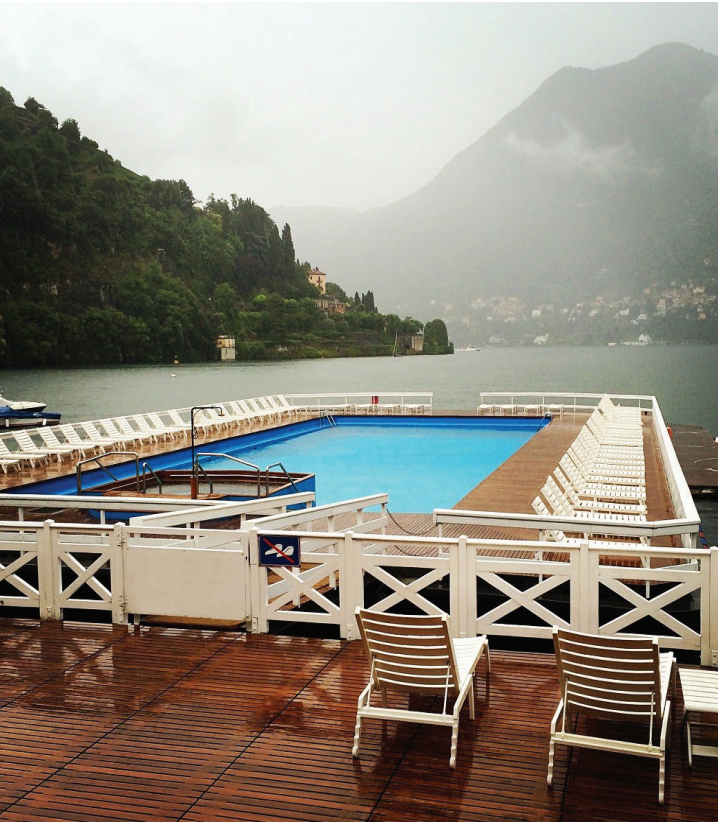 A floating swimming pool at Villa d’Este is a favorite of sun-worshipping guests.

There is a floating swimming pool in Lake Como, surrounded by deck chairs that always seem to be occupied by readers and avid sunbathers. In the evening, these same guests can be found in elegant dress on the terrace, which overlooks the lake and is served by tuxedoed waiters bearing aperitivos, olives and arancini while a pianist plays softly in the background. This nightly social gathering is de rigueur, the essence of your stay at Villa d’Este. You can dine off the property, but you probably won’t, with the Michelin-starred Veranda on the premises. I donned the requisite jacket and tie to sit in a regal blue and yellow room that overlooks the lake, dining on a classic Veal Milanese while enjoying what are arguably the best views of the water. The Grill is the more casual choice. You can play tennis or squash here, enjoy the gym or head for the spa. Frankly, I never did any of those things. Instead, I looked forward to a daily in-room breakfast with a lake view, the leisurely consumption of a novel and the chance to enjoy a lifestyle redolent of the 19th century. In my book, if the term “luxury” survives, this is pretty much its definition. 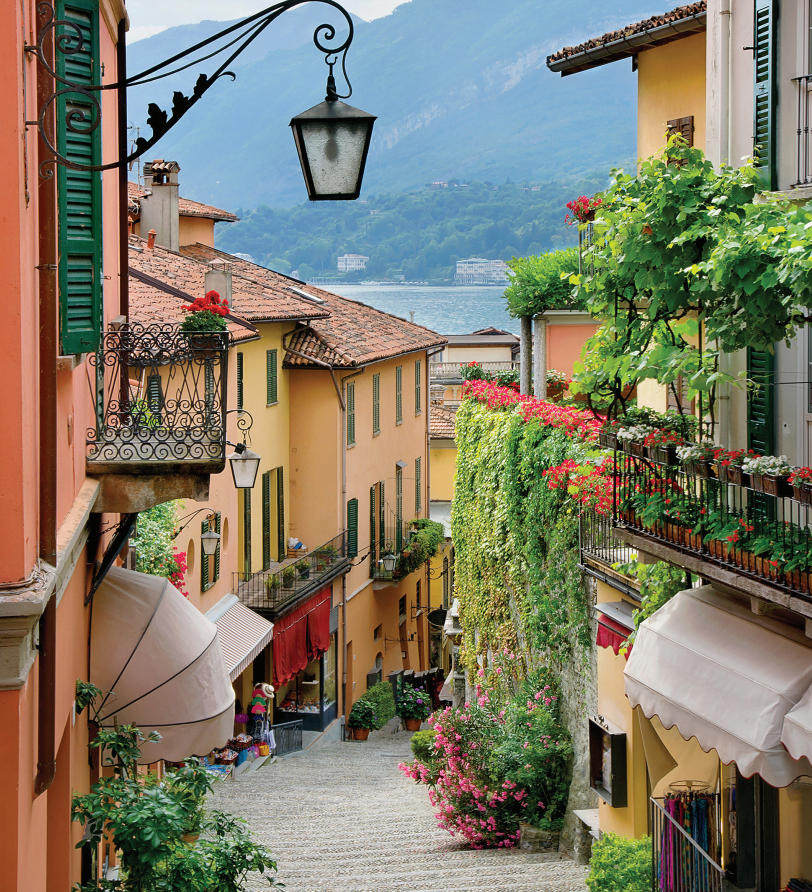 In the charming village of Como, winding streets snake down to the waterfront.