Barbara Lewis transformed a former home medical office, exam rooms and all, into a suite fit for large-scale entertaining.

“It took some vision to see past the medical examining rooms,” says Barbara Lewis. She’s referring to her home in Glen Cove, New York, which she and her husband bought from a retired physician whose practice was located on the house’s first floor. 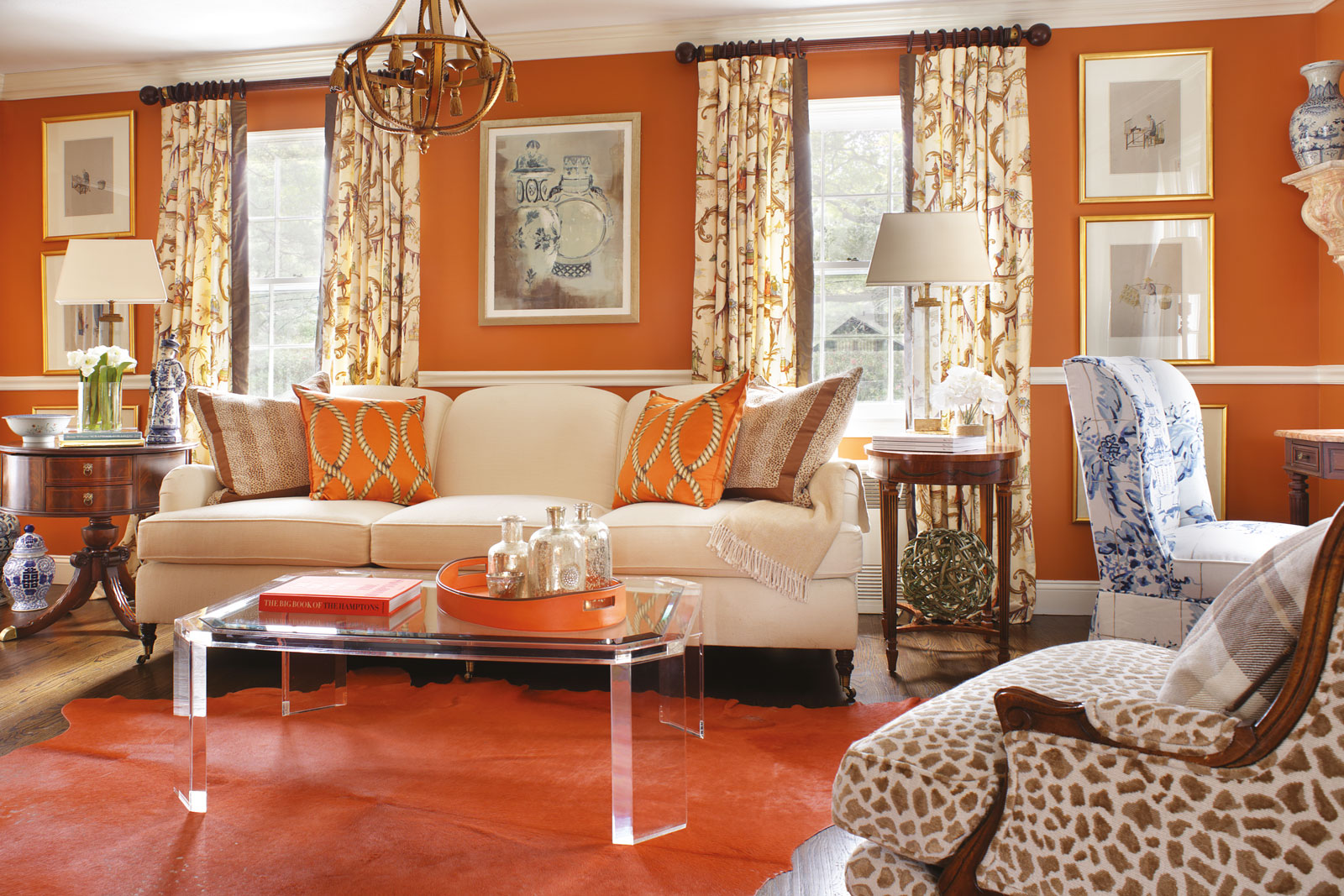 The orange room in Barbara Lewis’s Glen Cove home is one of several comfortable sitting rooms that used to be medical office space. Reflecting her eclectic sense of style, the room combines English and French furniture, chinoiserie and modern pieces. An acrylic coffee table rests atop an orange-dyed animal hide rug, both from Safavieh.

The exam rooms were converted into a great room, and the offices were turned into two adjacent sitting rooms, which Lewis, an interior designer, now calls the orange room and the brown room because of their wall colors.

She likes to refer to her abode as “a big little house” because there’s plenty of open space; good flow, with no dead-end rooms; and lots of additional seating, from ottomans tucked under library tables to porcelain garden stools that function as end tables but in a pinch can become, well, stools. 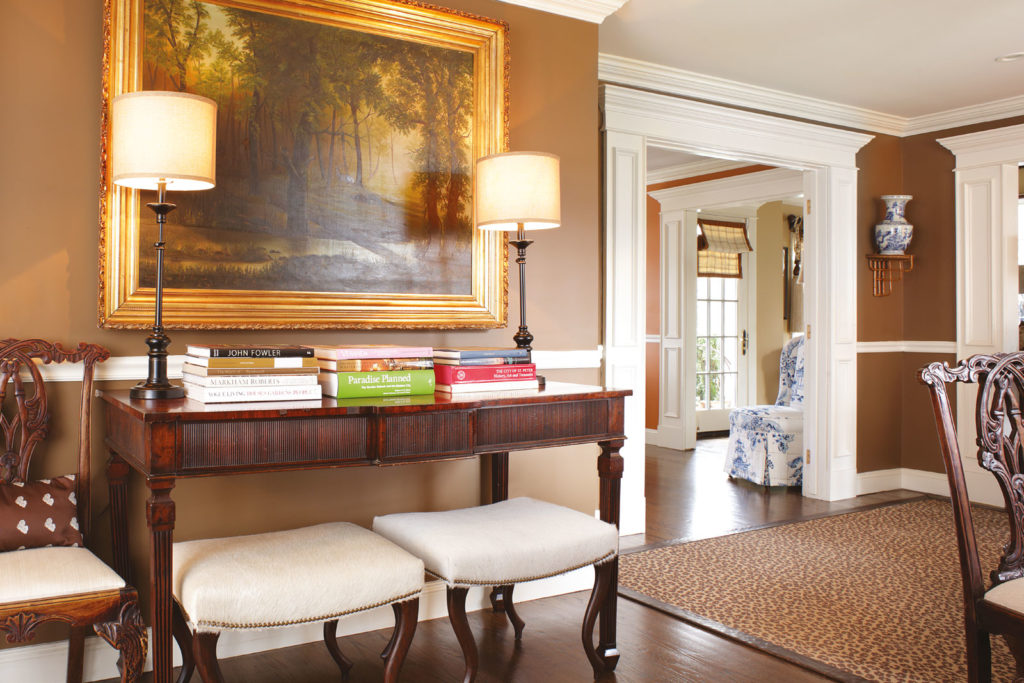 The adjacent orange room can be seen through the doorway. In the living and dining rooms, formality is softened by such touches as animal-print upholstery and a ceiling papered in a trellis pattern.

“My husband and I love to entertain,” she explains. “Several times a year we have a house party for 70 or so people, and having the additional sitting rooms is really key to making guests comfortable.” 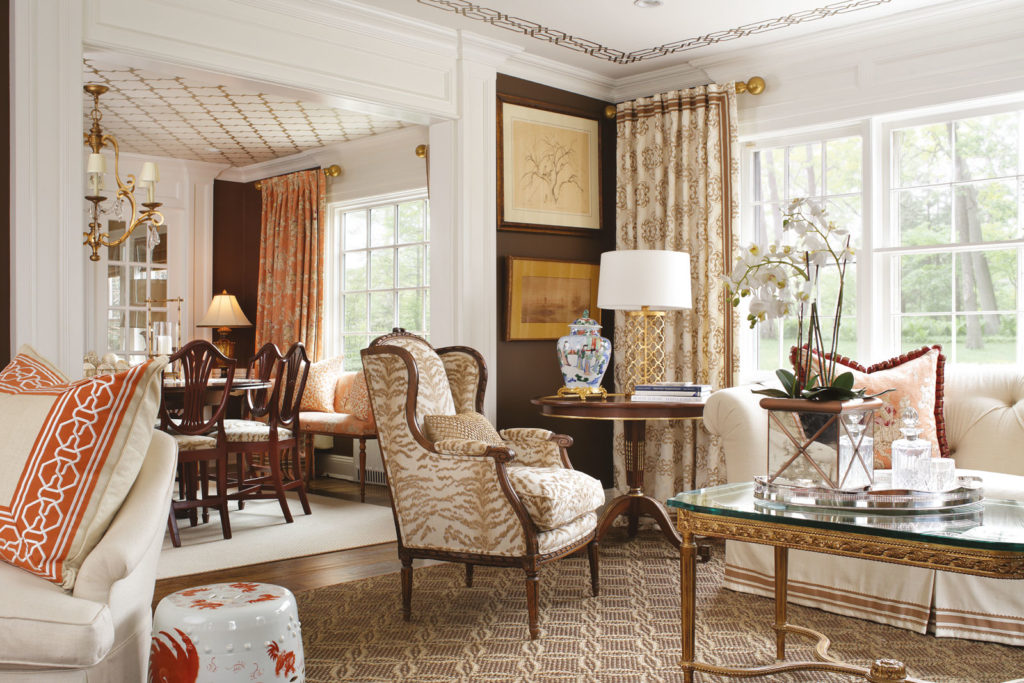 Lewis used an earthy palette throughout the home to tie the rooms together. Extra seating for
parties abounds in the so-called brown room.

The rooms display the fruits of a lifetime of collecting, which are rounded out by newer pieces—some traditional, some contemporary— from Safavieh. Lewis worked with Keith Murphy, a designer in the company’s Glen Cove store, to keep the spaces looking current.

“Even professional designers can benefit from the help of other designers,” says Lewis, “and that’s one of the things that makes Safavieh such a great resource.”