For a Connecticut show house, a plain Jane library is transformed into a stylish personal retreat.

Show houses, especially ones with a good backstory, allow designers to have fun creating make-believe history. Such was the case for Christina Murphy, whose task was to reimagine the library of a 19th-century church rectory in Fairfield, Connecticut.

The simple frame structure has low ceilings, and the library is a smallish box of a room. Murphy turned that limitation into a benefit: “I wanted to create a retreat that was cozy, stylish and unique,” she says. 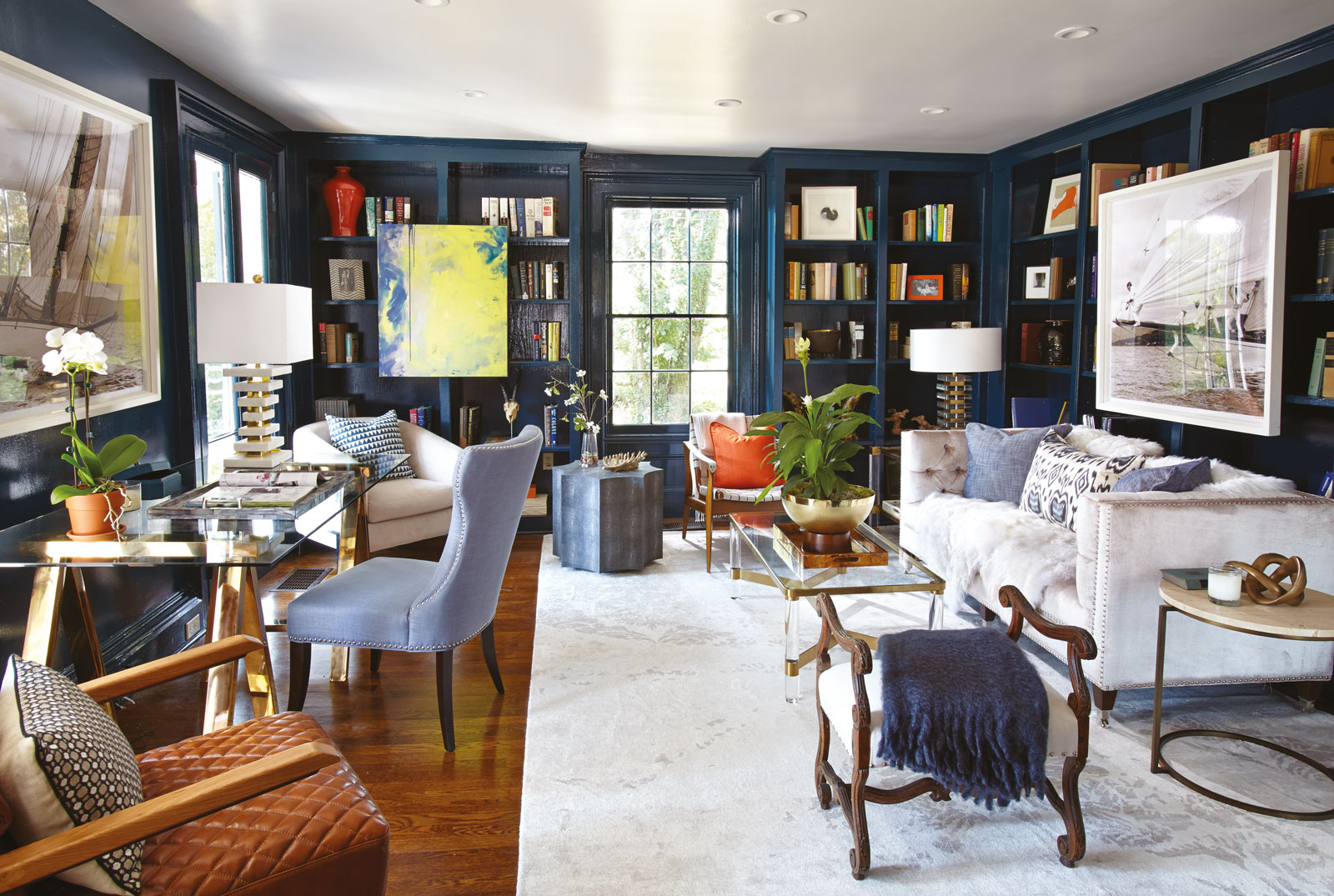 Walls lacquered in Farrow & Ball’s Hague Blue set a dramatic stage for this cozy library. Christina Murphy’s goal was to make the room look like it had been collected over the decades, although every piece is in fact new and from Safavieh.

A shortcut to cozy is a room’s wall finish. Strong color works well, as does a gloss coat, in small spaces. So Murphy began by lacquering the library walls in Hague Blue by Farrow & Ball. It’s a rich, vibrant blue, a hue midway between royal and navy. In high shine, Hague Blue performs the neat trick of exuding drama and a sense of calm at the same time. Cozy never looked so good!

Working with designer Margaret McSharry of Safavieh’s flagship Stamford store, Murphy’s next feat was to furnish the room from scratch in a way that looks like “slow design”—as though a world-wise and well traveled occupant had bought, collected and inherited pieces over a period of decades. The duo chose pieces exclusively from Safavieh’s Couture collection inventory. Everything is new, although many of the pieces seem to bear the patina of age. 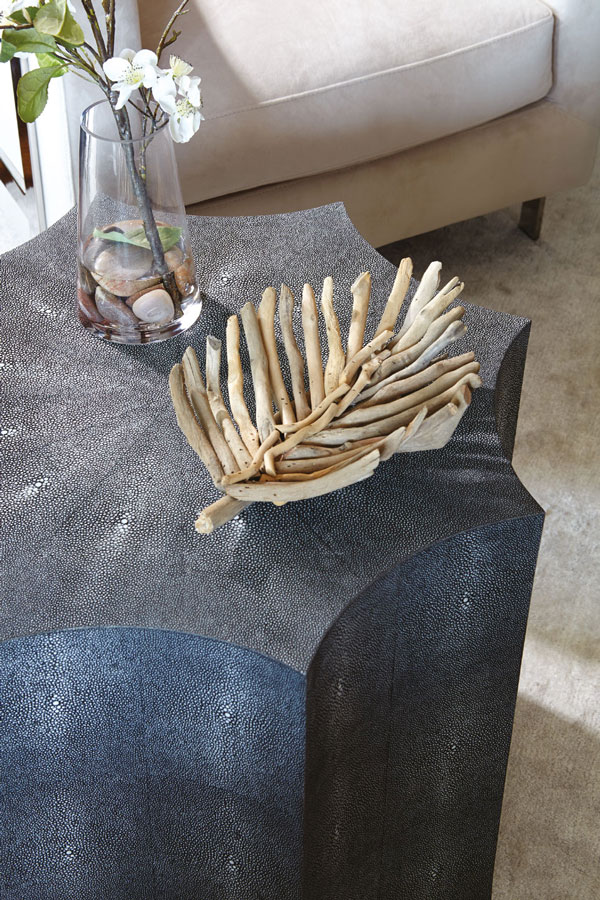 Above, a leaf dish made of driftwood adds to the impression of age.

Other furnishing secrets? Color again is part of the magic: Blues, browns, beiges and pops of orange and green almost dance against the dark blue walls. Oversized artwork is hung so it seems to float in front of the bookcases, creating an additional sense of movement. Horizontal planes (note the table lamps) help make the ceilings seem taller. And modern pieces—a glass-and-metal sawhorse desk, a quilted leather armchair—lend an air of contemporary chic.

Color is part of the magic here: Blues, browns, beiges and pops of orange and green seem to dance against the dark blue walls. 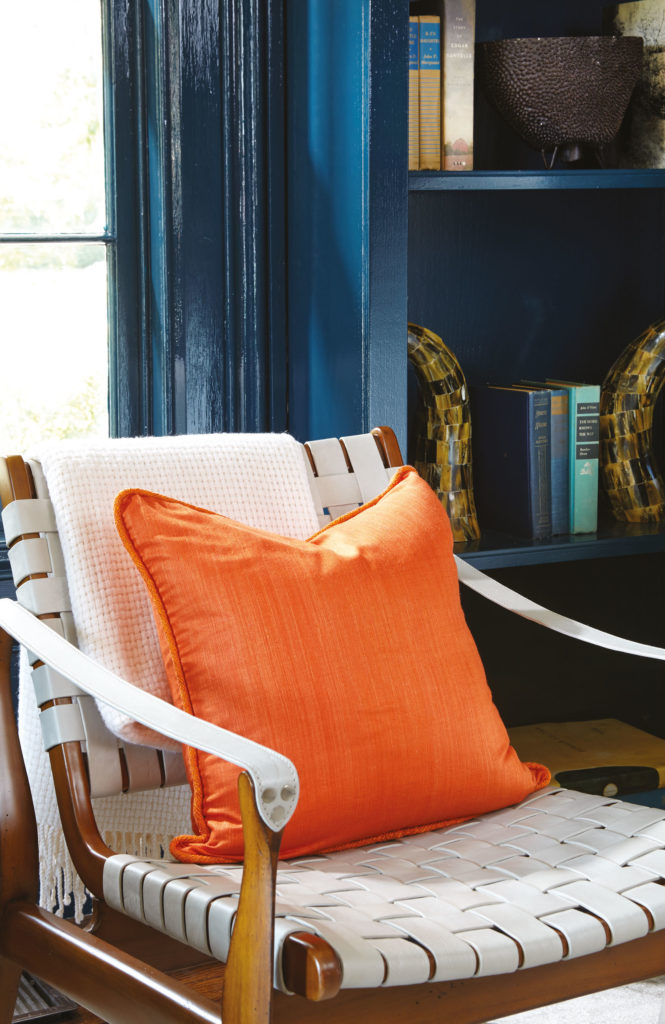 So what does this library tell us about the imaginary occupants of the rectory? They must be broadminded humanists and lovers of life. Maybe the vintage photos show the parson’s grandfather, who raced J boats in the 1930s. He met the love of his life in Paris during the war. She was a bookseller who knew Hemingway. After VE Day, Granddad brought his new bride home to Connecticut, where she raised hothouse orchids, a hobby she passed down to her grandchildren. … And the story goes on—conjured in the imagination of the show house visitor.

“What I did here in make-believe is what we do for clients all the time,” says McSharry. “We help them tell the stories of their lives through design.” 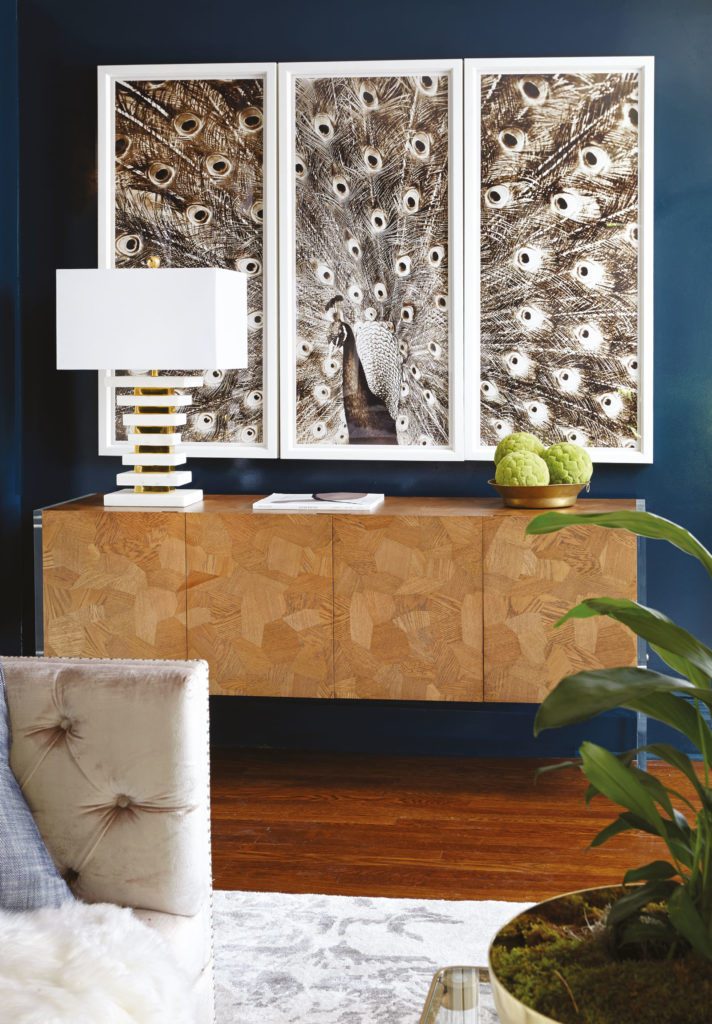 A triptych of a peacock rivets the eye above a contemporary marquetry console.