The show house at Sands Point Preserve has become something of an annual tradition for Safavieh. Last year the design team of Karin Krinsky, Joe Murphy and Keith Murphy transformed the library into an elegant grand salon for a mythical New York businesswoman. This year’s make-believe client was “a modern family,” which posed an entirely different design challenge.

“We used some literary license to imagine the family’s requirements,” explains designer Keith Murphy. The large family room needed to function as a man cave for the cigar-collector father, an impromptu dining room for fireside meals, a playroom for the kids (from which television would be banned to encourage the lost art of conversation) and a library-cum-lounge for all.

“Just as slipping on a favorite, worn pair of blue jeans is instantly comforting,” says Joe Murphy, “we designed this blue room to look broken-in and create an instant sense of ease.” 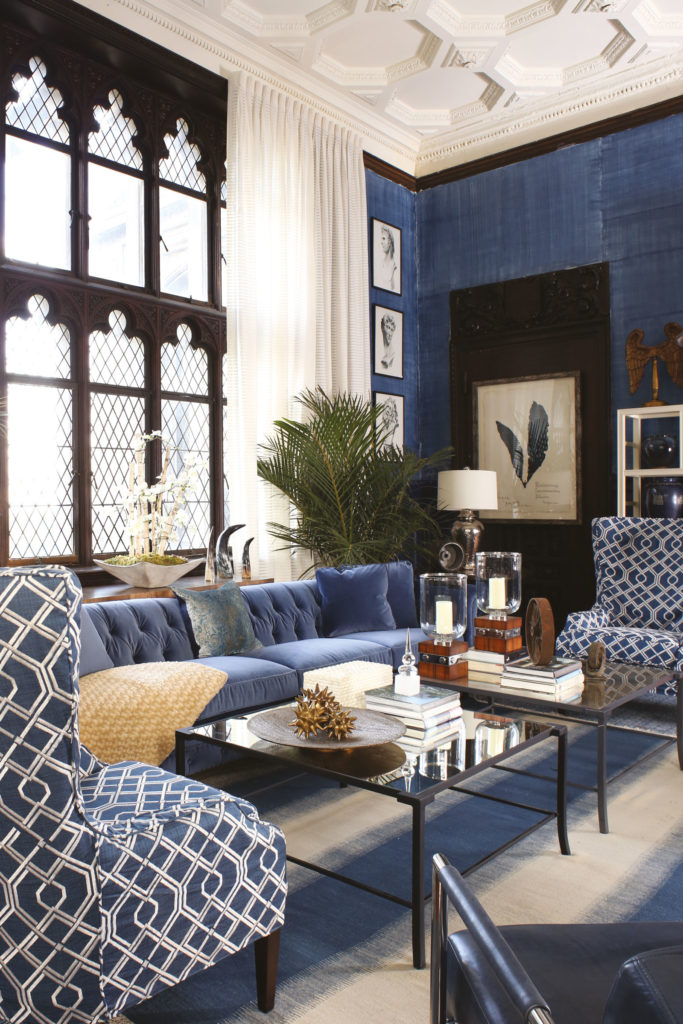 The space is elegant, easy on the eyes and calming to any creature, regardless of age or sex, thanks to the fearless, full-on use of the color blue. 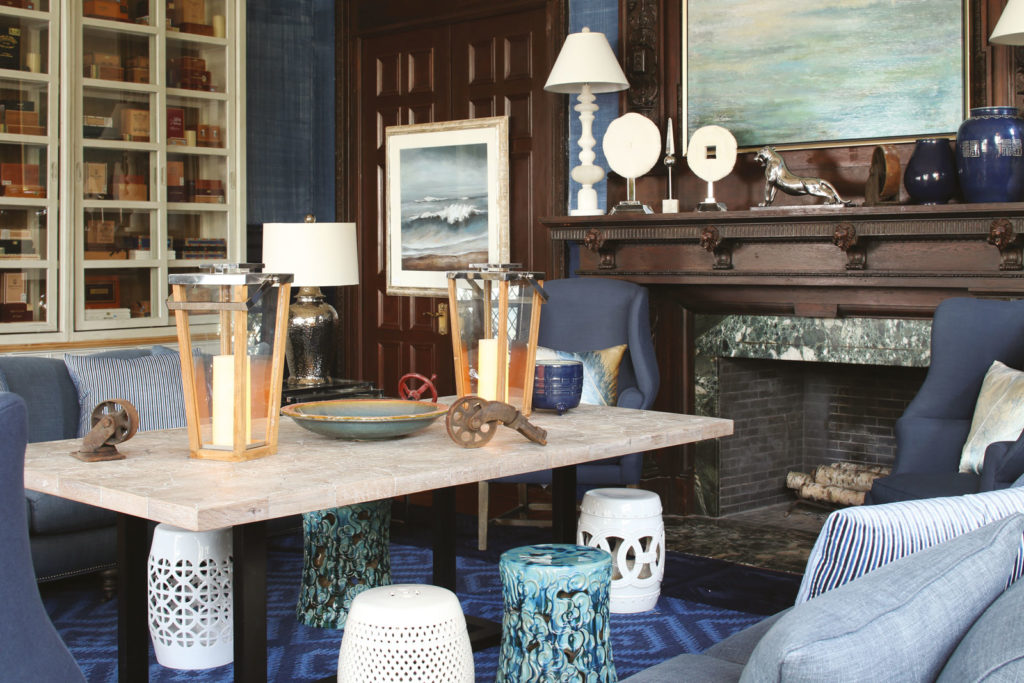 A marquetry-topped table and porcelain garden seats provide a casual setting for fireside meals and family board games.

The result appears nothing like a fusty gentlemen’s club, nothing like a casino and nothing like a stadium sky box—three of the looks typically associated with the man caves of suburban homes. Nor does the space resemble the toy-strewn bonus room or basement TV room in which so many children spend their formative years. This vast space was crafted for the thoroughly modern, age-integrated, somewhat intellectual post-bonus-room family that’s not afraid to eat, drink, smoke and have a good time.

A soothing study in blue, the finished space is not masculine per se, except for tell-tale details like the spent cigars resting in an ashtray made from a Mack truck hood ornament, the half-empty bottles of Bulleit bourbon and the industrial accessories strewn about—massive, rusted gears; a five-pound monkey wrench; and a used air filter that seems to have come from a jet engine. 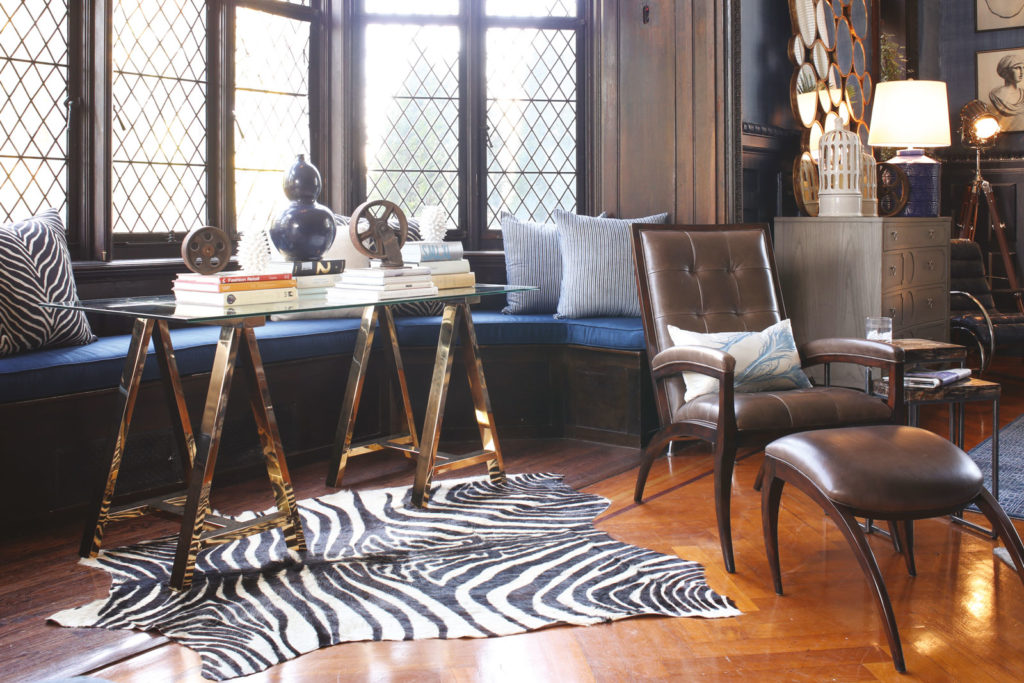 Yet the space is elegant, easy on the eyes and calming to any creature, regardless of age or sex, thanks to the fearless, full-on use of the color blue. It started with the walls, notes Krinsky. Layers of wallpaper were stripped away, and the plaster was then sheathed in canvas. The canvas was dragged and glazed in a multi-step paint process—the painters having been ordered to “make the walls look like blue jeans.”

Next came floor coverings—one-of-akind handmade rugs by Safavieh, each shimmering with the jewel-like blue iridescence of butterfly wings. The soft furnishings, from long, low sofas to tall wing chairs to throw pillows, spanned the spectrum of blue, and the illusion of living in a cloud was soon complete, to be enhanced only by the curl of blue cigar smoke (reserved, perhaps, for times when the mythical kids were away at school or summer camp). 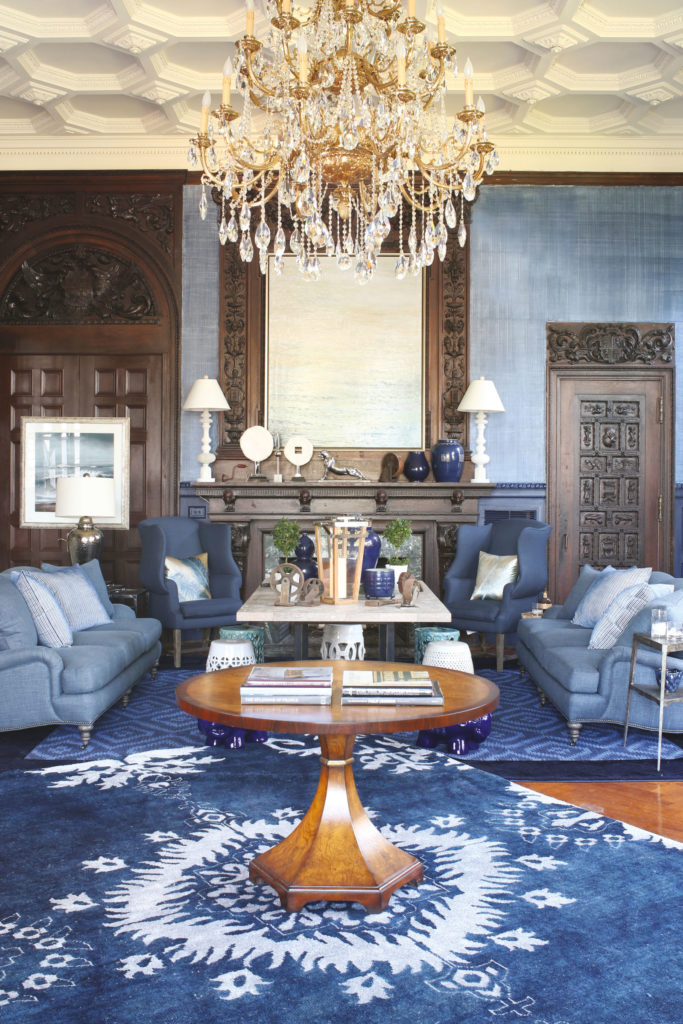 A blue rug with a bold central medallion and a Regency fruitwood table mark the center of the room. Beyond, linen-covered English sofas beg guests to linger and relax.