Inside its traditional shell, a Connecticut home is transformed into a contemporary jewel. 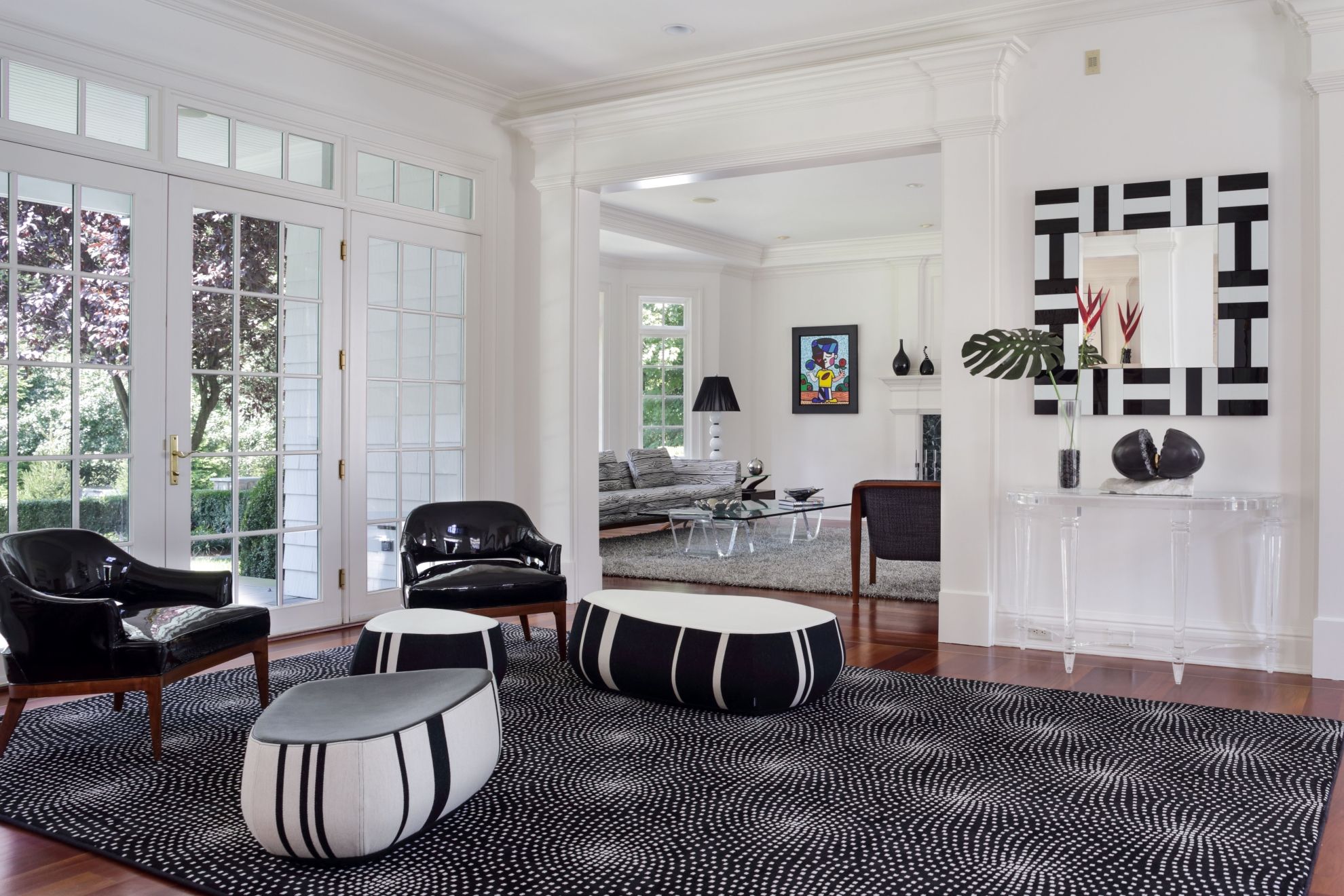 Designer Ron Marshall treated this entrance hall as an impromptu sitting room, where the furniture can be rearranged at will. In the living room beyond, a boldly colored painting serves as an exclamation point. 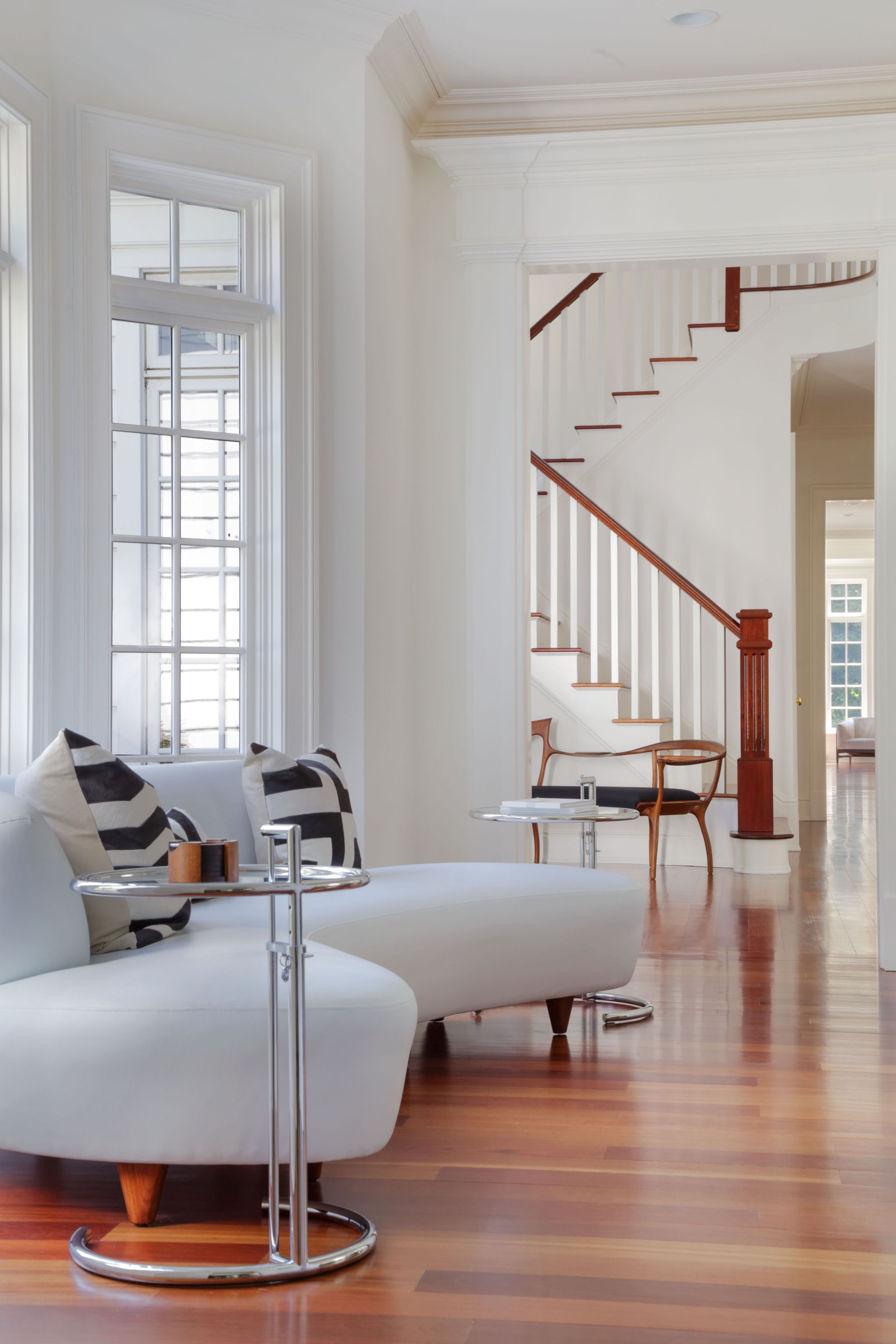 Broad hallways were treated as rooms to be furnished. On the first floor, a sinuous sofa and an Art Nouveau-style settee encourage one to sit and pause. 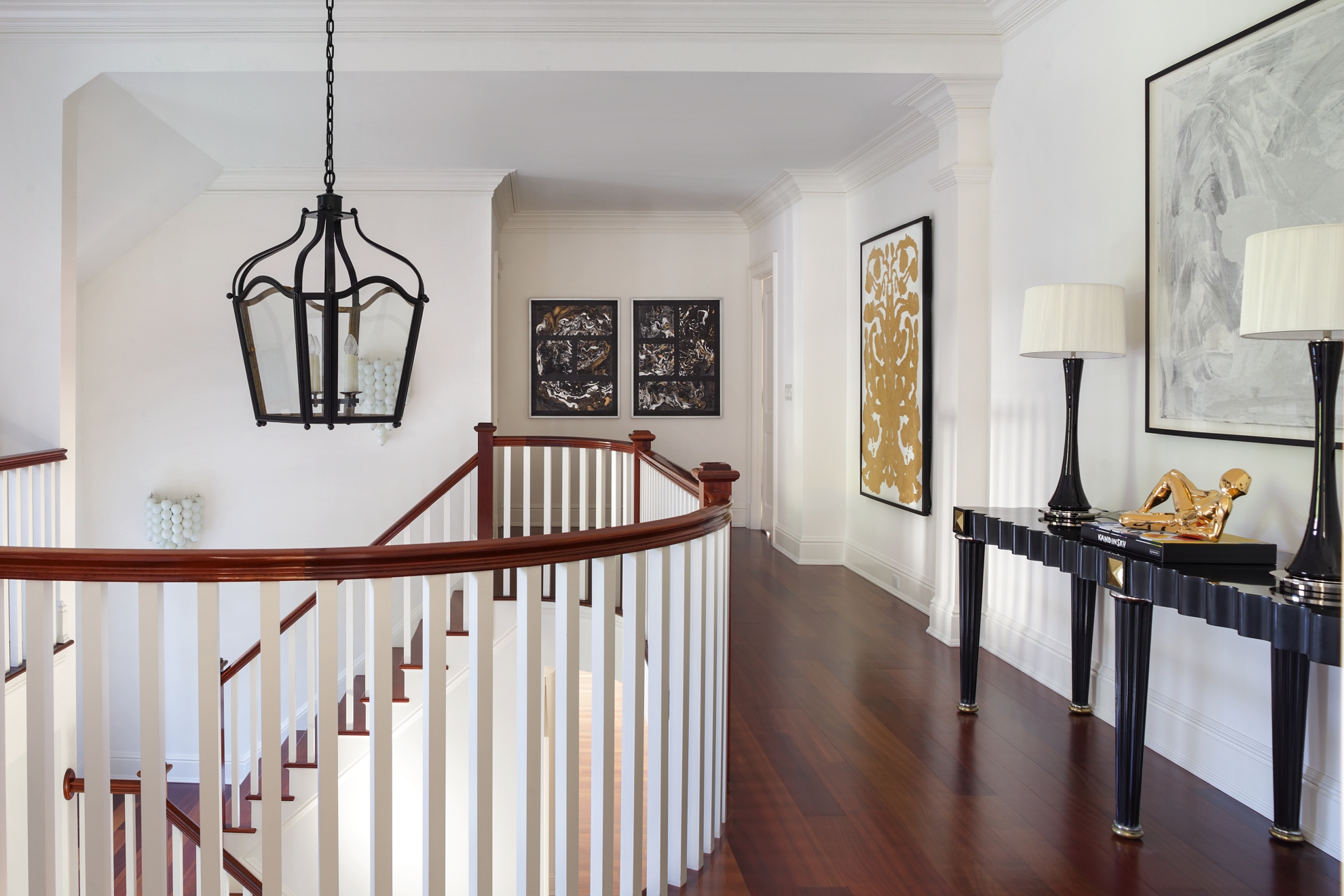 On the second floor, a long hallway becomes a gallery for paintings and sculpture.

On the outside, this rambling traditional home in New Canaan, Connecticut, is a pleasant architectural pastiche—a case of Norman Revival meets Colonial Revival meets Shingle Style. It gives the appearance of having been added to over several decades of the early 20thcentury, when in reality, the house was built in one fell swoop in the early 21st century.

On the inside, the house had undeniably great bones, but they were obscured by some poor color choices. “A previous homeowner had painted the kitchen an unfortunate blue,” recalls designer Ron Marshall. “And that was just the tip of the iceberg.”

Working with the new homeowners, Marshall made it his first step to right those color wrongs. He had almost every surface painted decorator white— walls, ceilings and the extensive traditional moldings. Then he complemented the architecture with modern furnishings in a very simple color scheme— lots of graphic black-and-white, soft grays and transparent materials. What little color he included is intense and hangs on the walls, in the form of paintings from the homeowners’ collection. One or two well-chosen paintings serve as a punctuation mark in each room.

The finished project is proof that a restricted palette doesn’t have to be boring. Consider the entrance hall, where a black-and-white optic pattern rug

This tailored living room can transform quickly into a media room. The lounge chairs swivel to face a motorized screen-cumblackout-shade, which descends from the ceiling and covers a large window.

The façade of the house is purely traditional, offering no clues of the contemporary décor within. 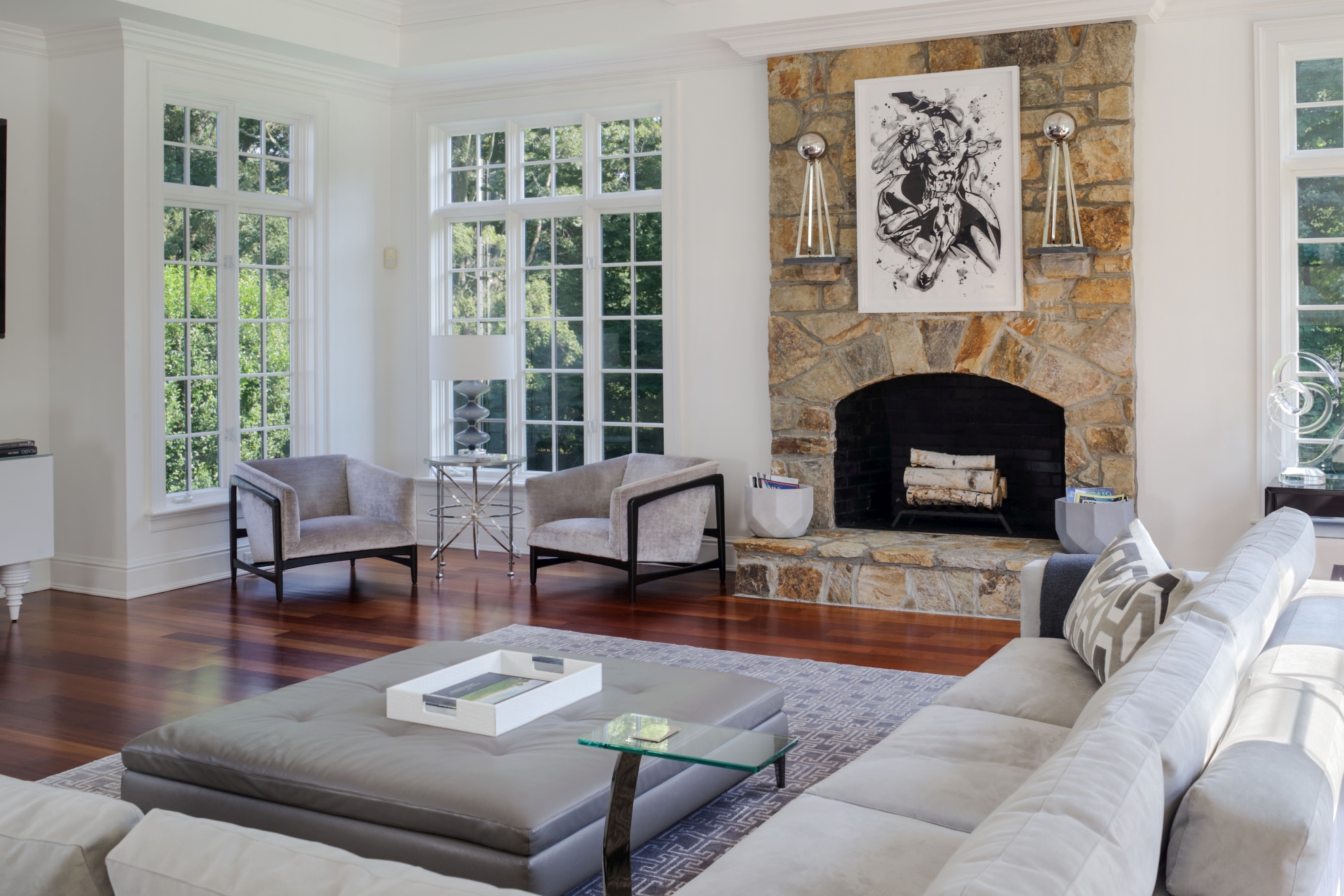 In the monochromatic family room, even the artwork is black and white 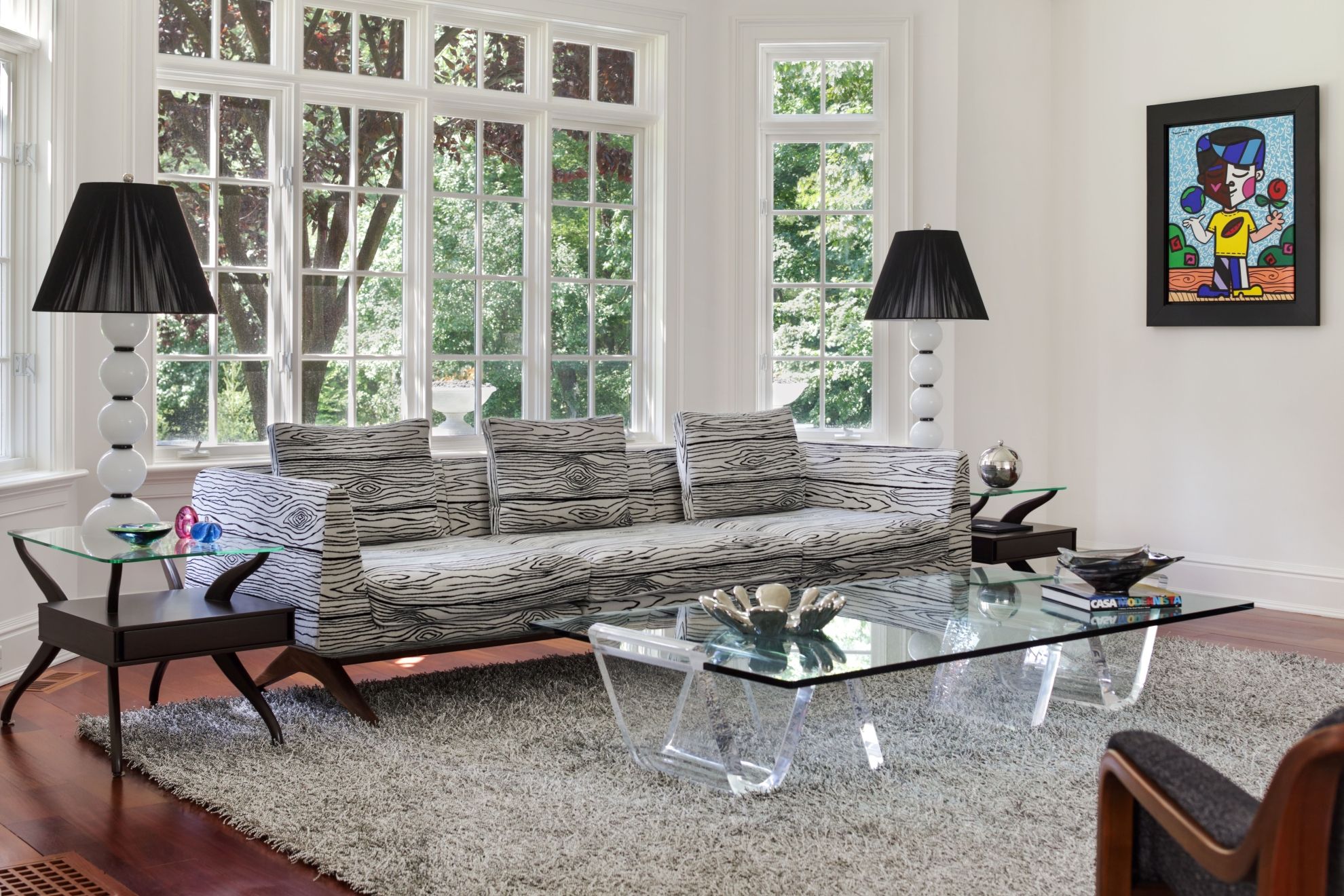 In the main living room, a birch-bark patterned sofa is flanked by towering Murano glass lamps.

exerts a near-hypnotic effect. Club chairs positioned on this psychedelic carpet are covered in black patent leather, recalling the “wet” look of the 1960s. Also floating on the rug is a trio of free-form striped ottomans. They’re meant to be rearranged at will. In the adjacent living room, a sofa covered in a birch bark print is flanked by two towering Murano glass table lamps, which are of true ’60s vintage. Here the furniture rests on a funky shag rug that looks as though it were fashioned from paper packing material.

Thanks to the spacious layout, Marshall was able to treat hallways as sitting rooms. He did the same with a media room, where lounge chairs can swivel from the conversation area to face a huge viewing screen that descends from the ceiling. The screen also functions as a blackout shade, covering a large window. By making this room metamorphic, Marshall eliminated the need to sacrifice aesthetics for functionality. That sleight of hand is evident everywhere in this home: Its deceptively simple, relaxed living spaces are all drop-dead gorgeous.