Meet Me in Montauk

High above the pounding surf, this rambling beach house represents a new chapter in an ongoing love story.

The easternmost point of land in New York, Montauk is a maker of memories. It was here that The Rolling Stones began writing “Memory Motel,” one of their most evocative ballads, while staying with Andy Warhol in 1975. Montauk is key to the film “Eternal Sunshine of the Spotless Mind,” which explores the nature of memory and romantic love. “Meet me in Montauk,” says Clementine to Joel in a dream, planting the seed that eventually draws the couple back together at the tip of Long Island. The owners of the new house shown here can relate. The wife was 4 years old during her first Montauk summer. When she started dating her husband more than 30 years ago, she proudly brought him east to experience the magical place that kept drawing her back. 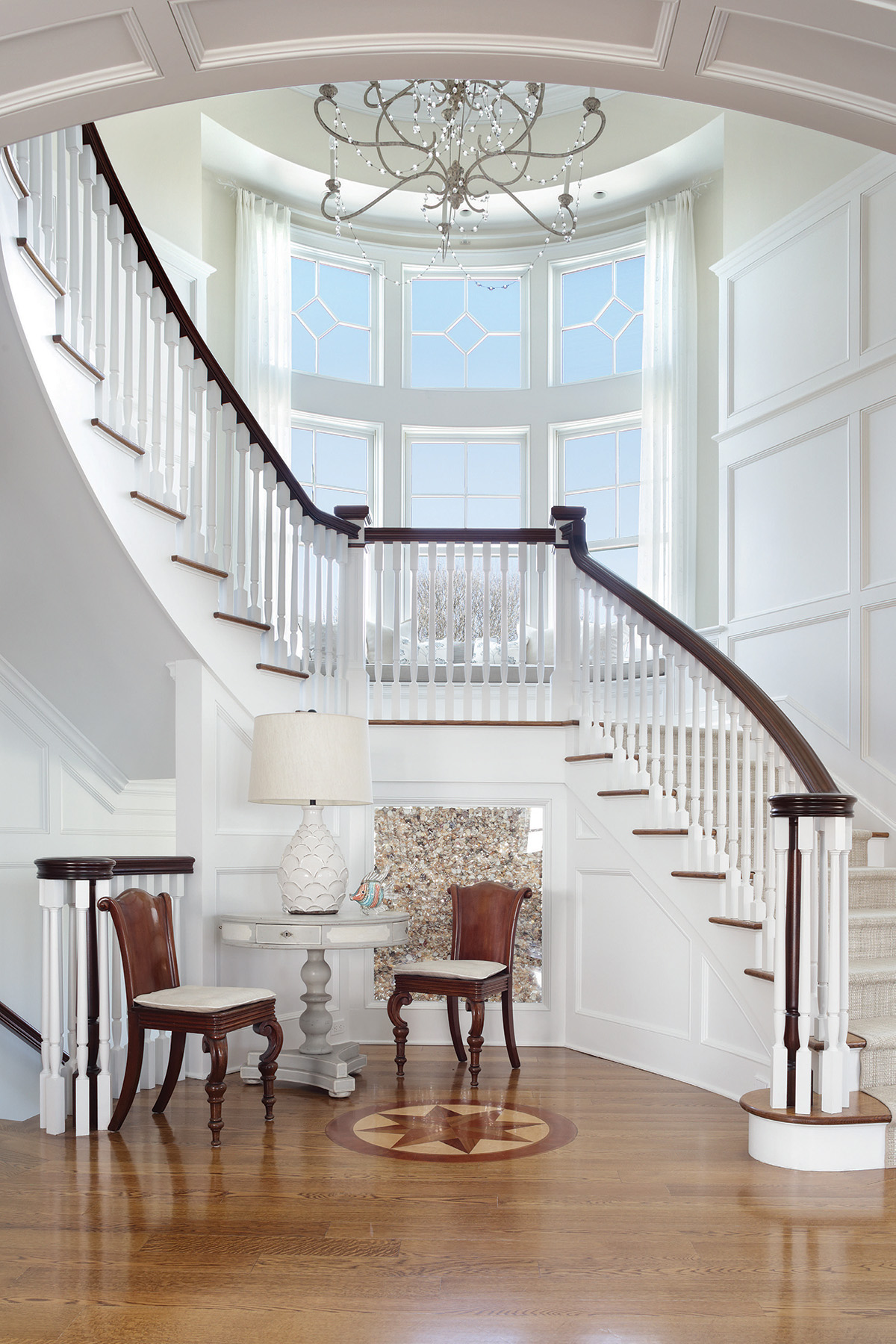 Beneath the stair landing at left, an interior window is stacked with myriad tiny seashells sandwiched between panes of glass.

Although his introduction was on a cold, rainy day, the couple has spent time in Montauk practically every year since then. Recently they completed a new house there, a decade-long labor of love that began when they acquired a special parcel of land in 2007. Set on a hill above the beach, the lot offers superb views of the crashing surf below and sweeping views of the Atlantic coastline. Looking east, one can see all the way to Ditch Plains, a distance of several miles. 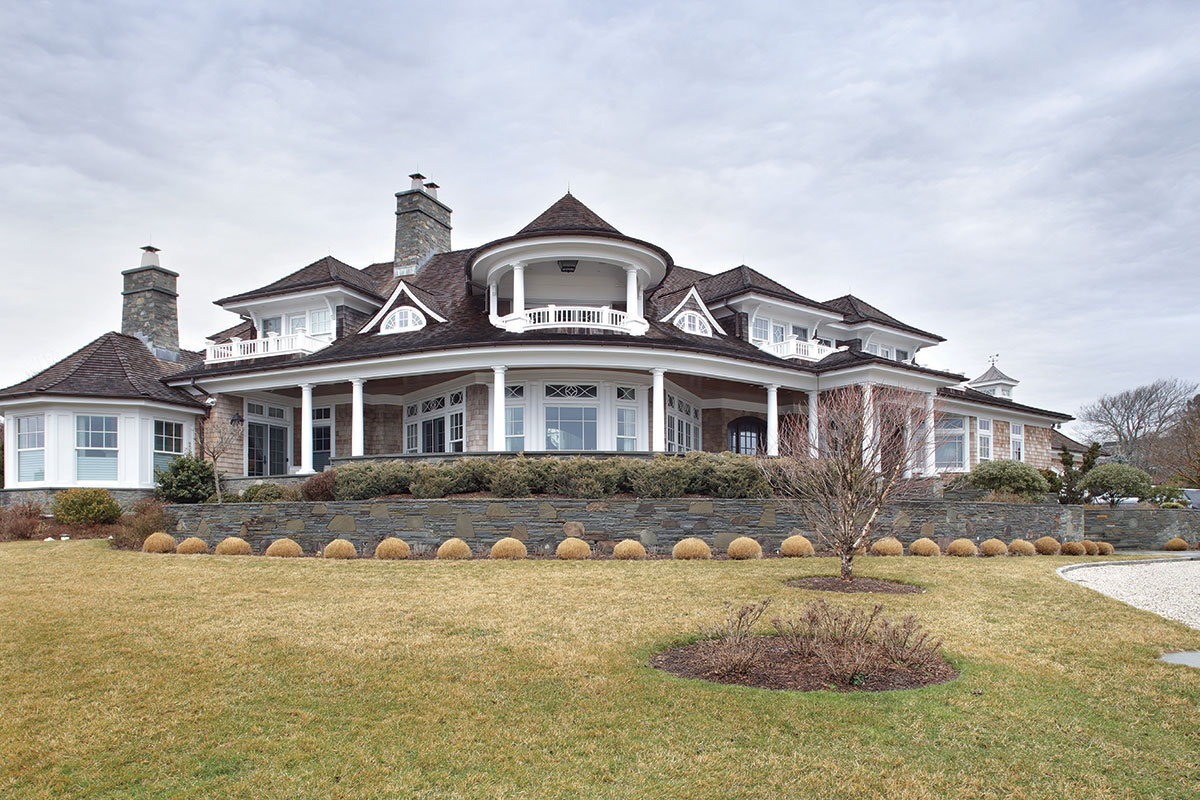 At 72 feet above sea level, the house is in no danger of being flooded in a storm. But it still needed windows that are hurricane resistant (the test: withstand shattering by a 2x4 piece of lumber at an impact speed of 160 MPH). The Shingle Style façade may look delicate, but it’s not.

In designing a traditional Hamptons beach house, the couple and their architect, the late Tom Issing, sought to do justice to the ocean views and the rambling Shingle Style, despite being constrained by a tight building envelope on a scant-acre lot. When the zoning law changed midway through the design process and the footprint needed to get even tighter, major modifications were needed. “There was so much detail involved, in time we ended up with a stack of revised plans three feet high,” recalls the owner. 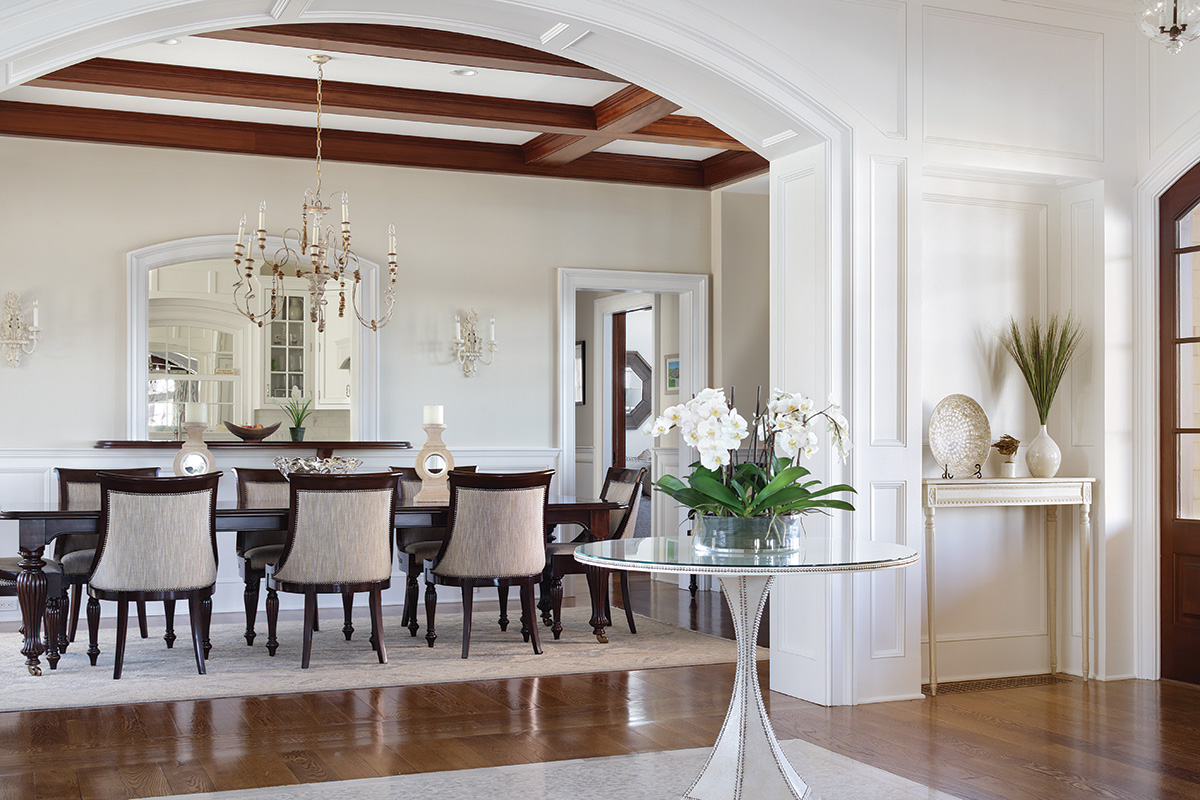 In the entrance hall, a delicate center table rests atop a floor mosaic designed by Ron Marshall. The dining room passthrough ties the kitchen to the rest of the house—and allows a mirrored interior window above the kitchen sink to reflect the Atlantic surf.

Other key players on the project were Artisans Home Builders of Rowayton, Connecticut, and designer Ron Marshall. The same attention to detail that went into Issing’s architecture was lavished by Marshall on the interiors. Example: For the entrance hall, he sketched a geometric stone mosaic that evokes the rolling surf, and then scoured the East End for a source that could craft the mosaic by hand. Marshall’s trademark style, fully realized in this home, is to mix a few antiques and personal mementoes with new, transitional pieces, nearly all of which came from Safavieh. The effect is a rich, heritage feel that’s also fully up to date—the perfect environment for preserving old memories and making new ones.

The afternoon light casts moody shadows in the master bedroom. Beyond the double-sided fireplace is a sunken office-cum-sitting room. The window niche at right houses a settee for reading.