At an equestrian estate in South Carolina, vernacular architecture blends with Hamptons-influenced décor.

Rendered in the vernacular architecture of the South Carolina Low Country, this newly constructed dwelling in Palmetto Bluff has the patina of a historic home. An enormous screened porch promotes near-year-round outdoor living.

Palmetto Bluff, South Carolina, is known for its Low Country architecture. The equestrian estate you see here fits right in, but with a Northern twist. There’s a Hamptons vibe that comes from the homeowners’ previous experience living in Amagansett, New York. “I call it Low Country meets Coastal,” says Jimeale Hede, who with her husband created this property on the May River from scratch. 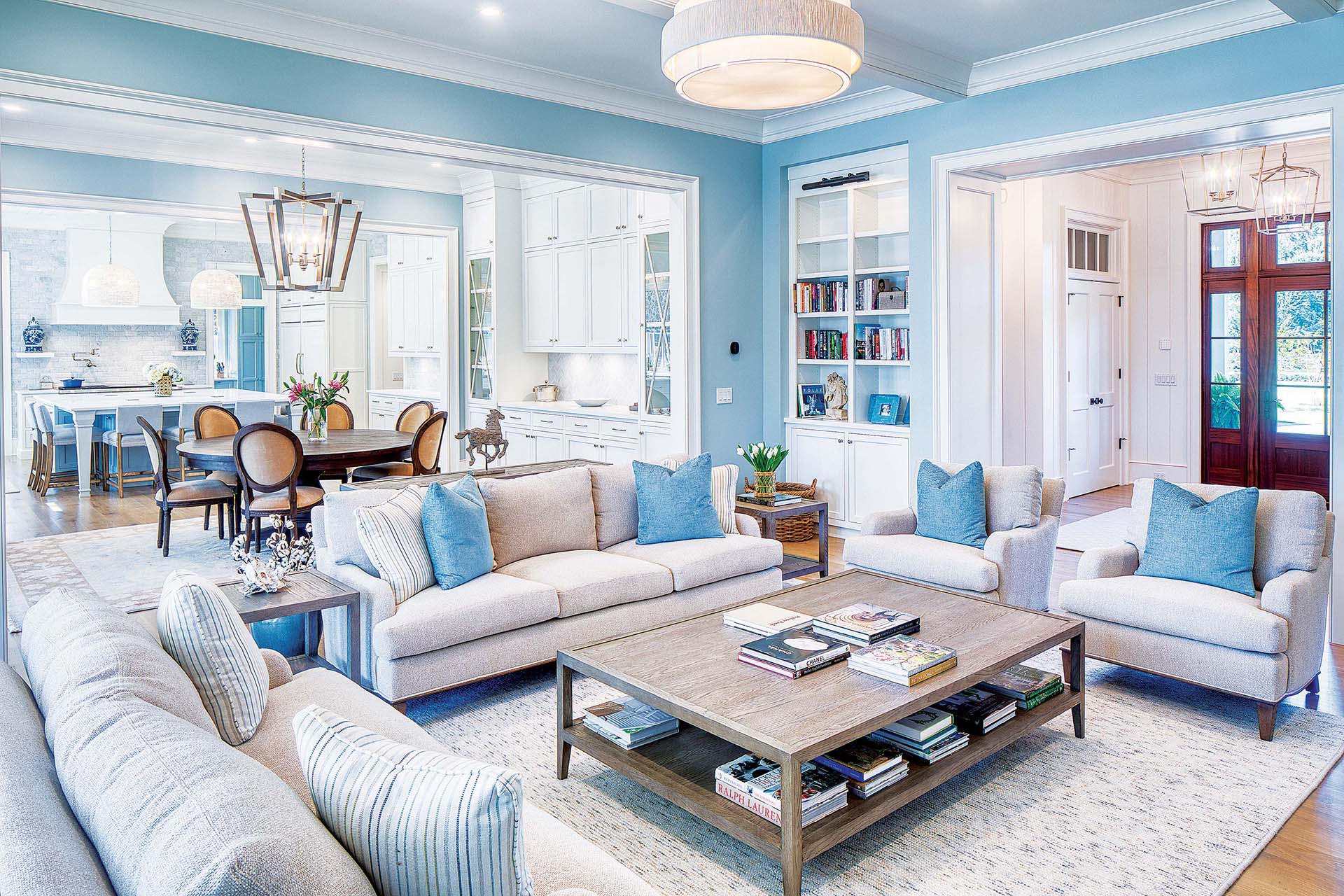 Two-and-a-half years in the making, it’s now their primary home. Jimeale is a dressage rider, as are the couple’s two young daughters, and the farm is home to eight horses. As is often the case with family farms, the resident species—some captive, some wild—have multiplied; the horses have been joined by dogs, cats, goldfish, a gecko, an 11-foot alligator that comes and goes from the pond, and a flock of boisterous crows.

To promote an indoor-outdoor lifestyle, the homeowners specified large sliding doors to connect the living room and the screened porch, left. Both the indoor and outdoor furnishings are from Safavieh.

The house reflects Jimeale’s vision, start to finish. An open plan unites living room, dining area and kitchen—the nerve center of family life—in a single large space. Adjacent to this is an enormous screened porch, “where we eat almost all our meals,” says Jimeale, “as soon as the weather warms up.” The porch is a bridge between the indoors and the swimming pool and patio. Together, these spaces form a complete setting for relaxed family living and entertaining. 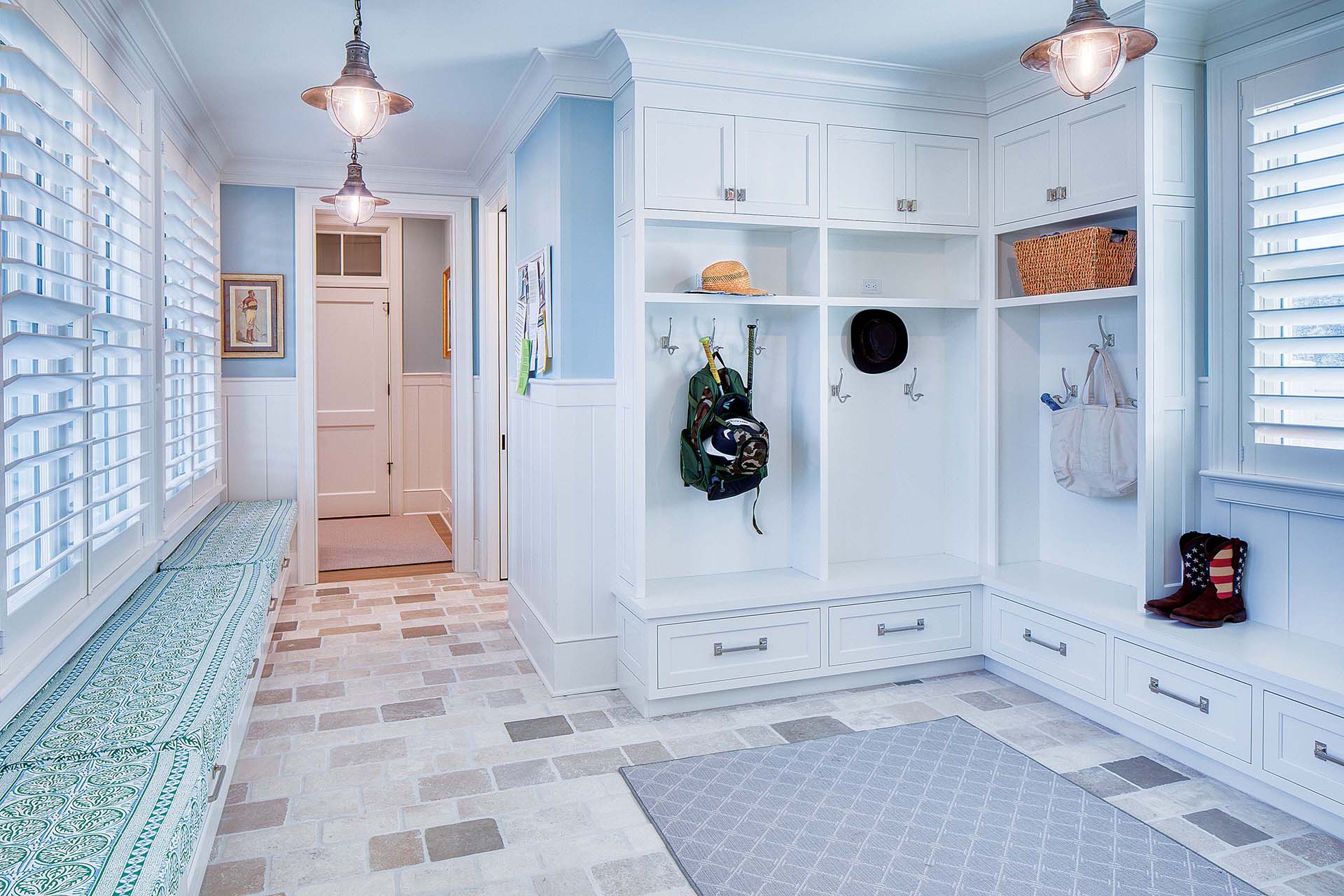 In the spacious mudroom, below, plantation shutters control the level of abundant natural light.

Foresight informed the architecture: “We had the idea that we would live entirely on the ground floor after the kids move out,” she says, although that shift remains more than a decade in the future. “We have a primary bedroom suite, an office—the works—on the first floor.” 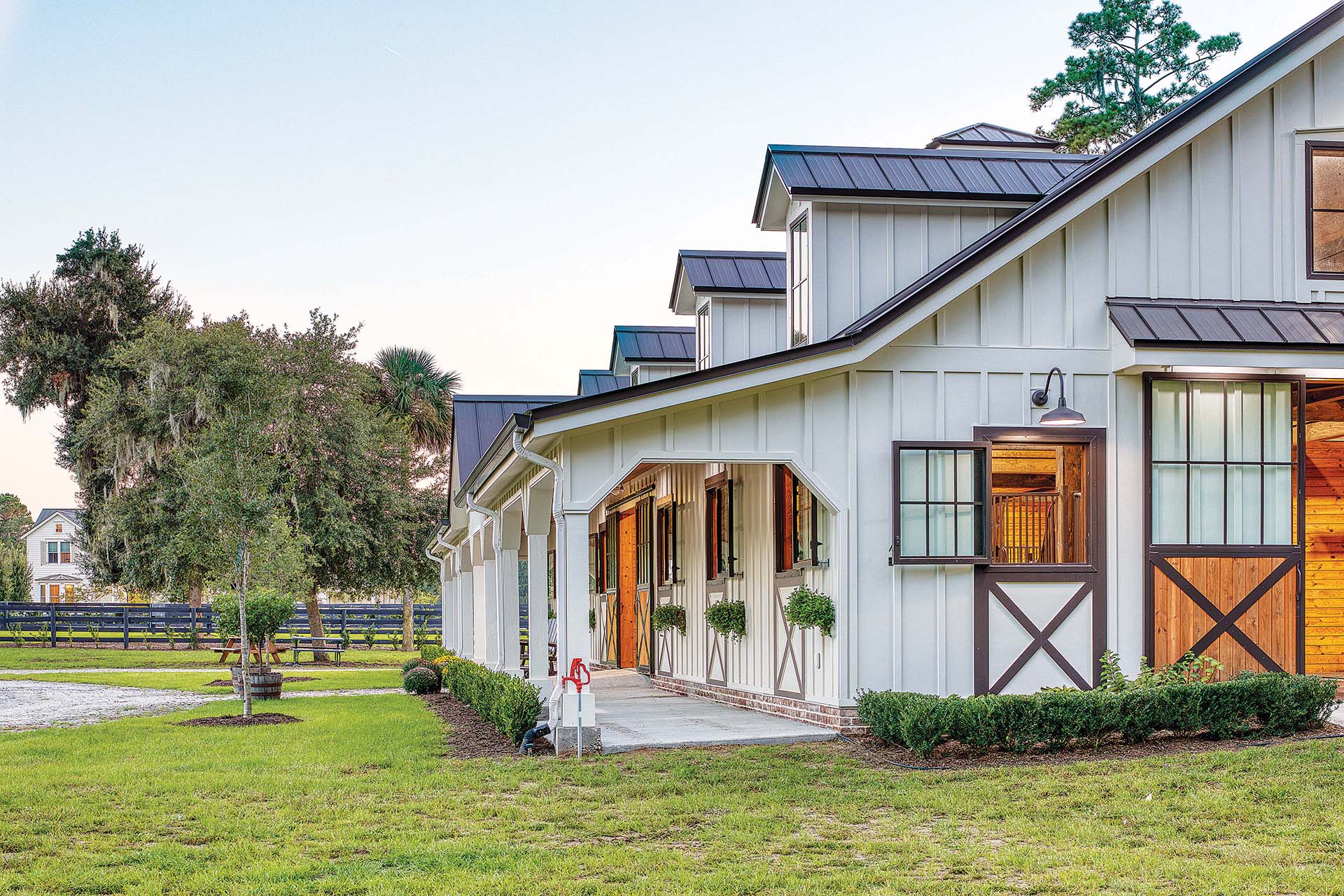 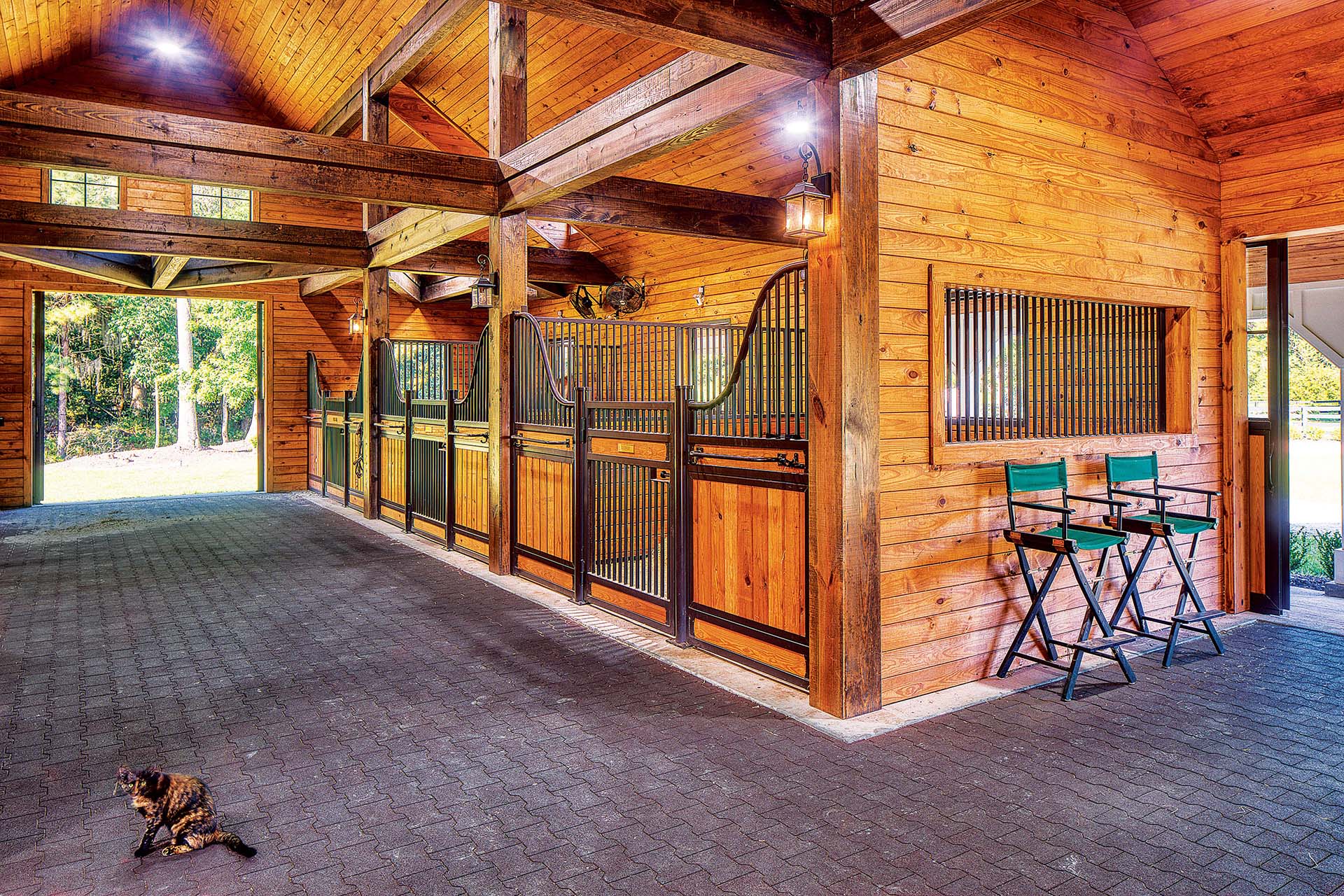 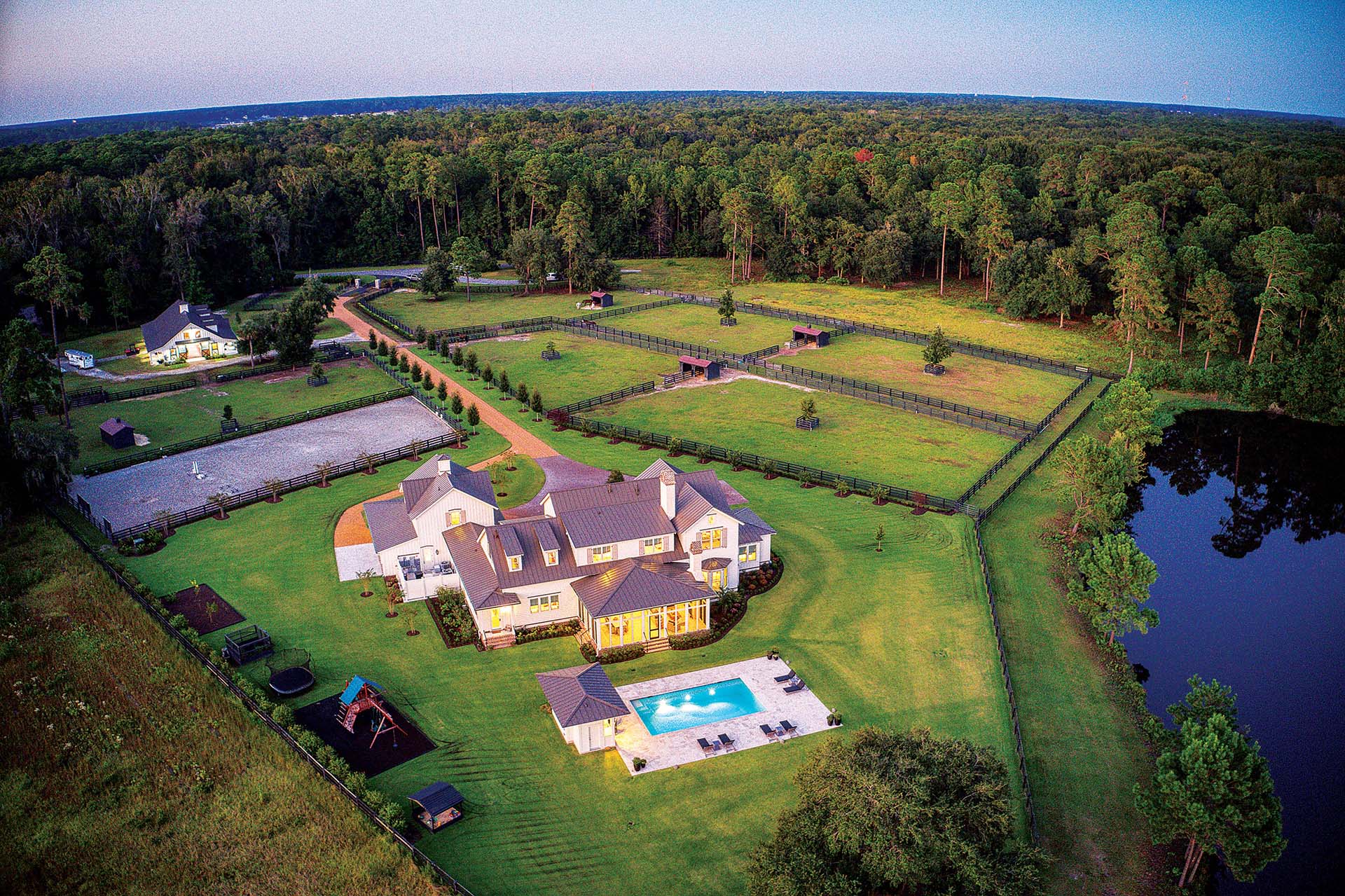 Seen from above at twilight, the farm’s buildings, paddocks and recreational areas reflect the relaxed sporting life of Palmetto Bluff.

When it came to furnishing the home, Jimeale had a brief trial with a local decorator. “She wanted to spec wrought iron light fixtures, and I knew right away that we did not see eye to eye!” So Jimeale became her own head designer and began working closely with Safavieh. “Virtually all of our furnishings came from Safavieh. There’s nothing more convenient,” she explains. 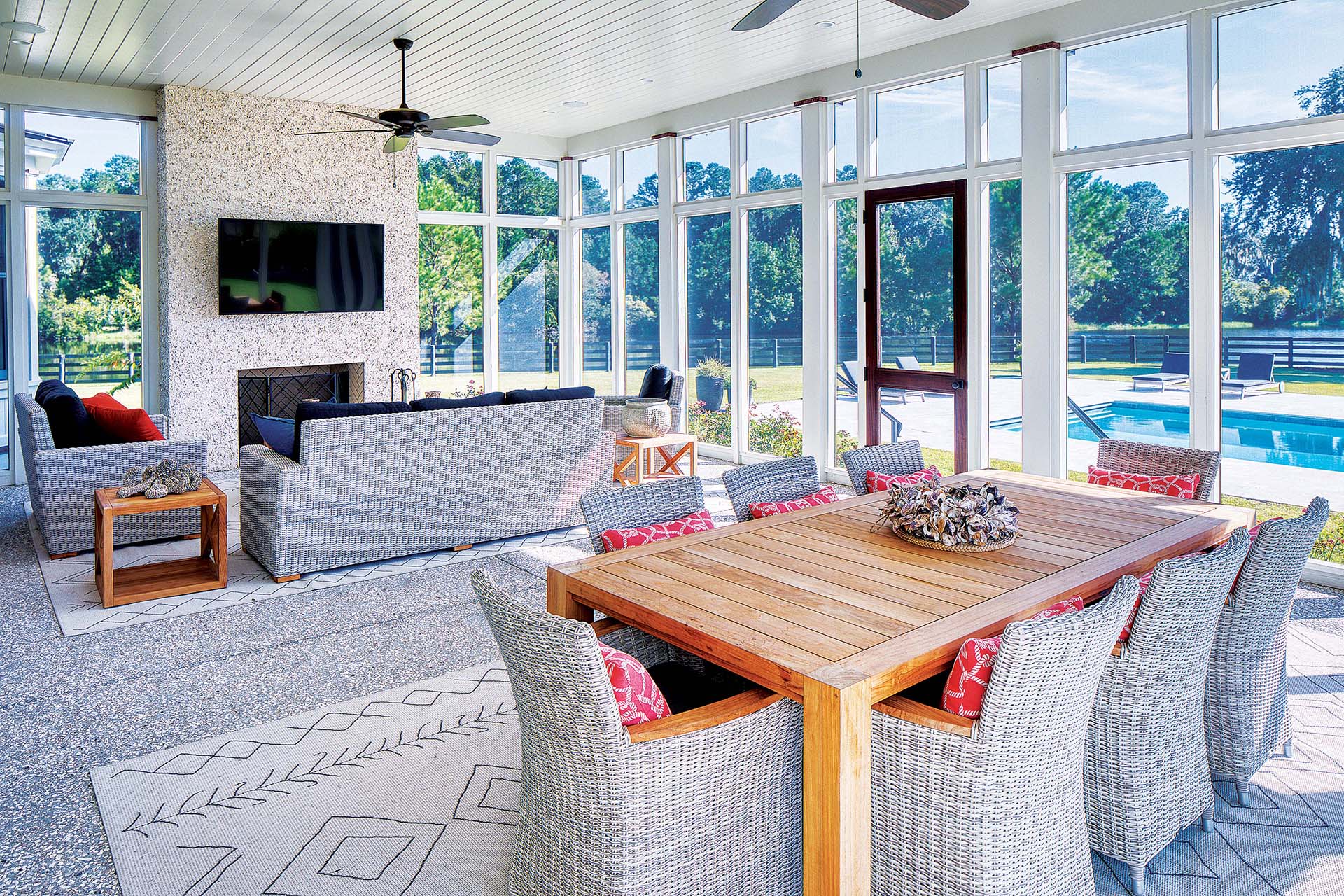 With a fireplace for warmth and ceiling fans for cooling, the screened porch is where the family eats most of its meals in all but the coldest months.

She used soft blues extensively—on the walls, the rugs and upholstered pieces—along with beachy whites. Reflecting the abundant natural light, these shades proved key to achieving the Coastal look. It’s a comfortable décor that suits the whole family. 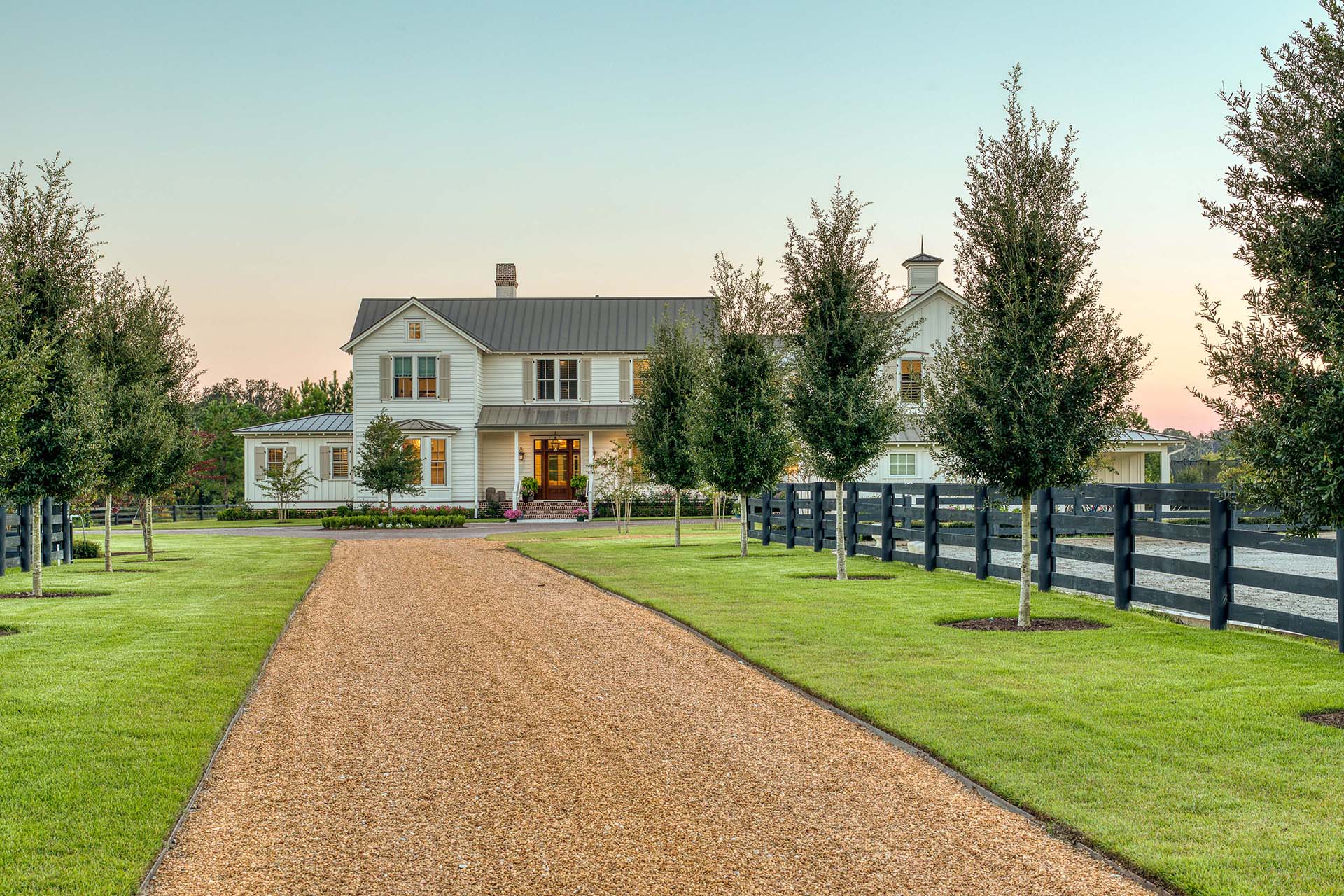 Seen at the golden hour, below, the front façade of the home is redolent of Southern hospitality.