With help from Safavieh, the entrance to the Glen Cove Mansion is restored to its former architectural glory.

When John Teele Pratt and Ruth Baker Pratt completed their neo-Georgian home in Glen Cove, New York, Country Life magazine called it “one of the best 12 country houses in America.” That was in 1913, the Golden Age of Long Island mansions. Mr. Pratt wouldn’t survive the Roaring Twenties (he died young of a heart attack in 1927), but his wife, the first Republican Congresswoman from New York, lived until 1965, and her family maintained the grand house and 55-acre grounds until then. A mere two years later, The Manor, as it had been known, was renamed the Glen Cove Mansion and opened as one of the first conference center hotels in the United States. 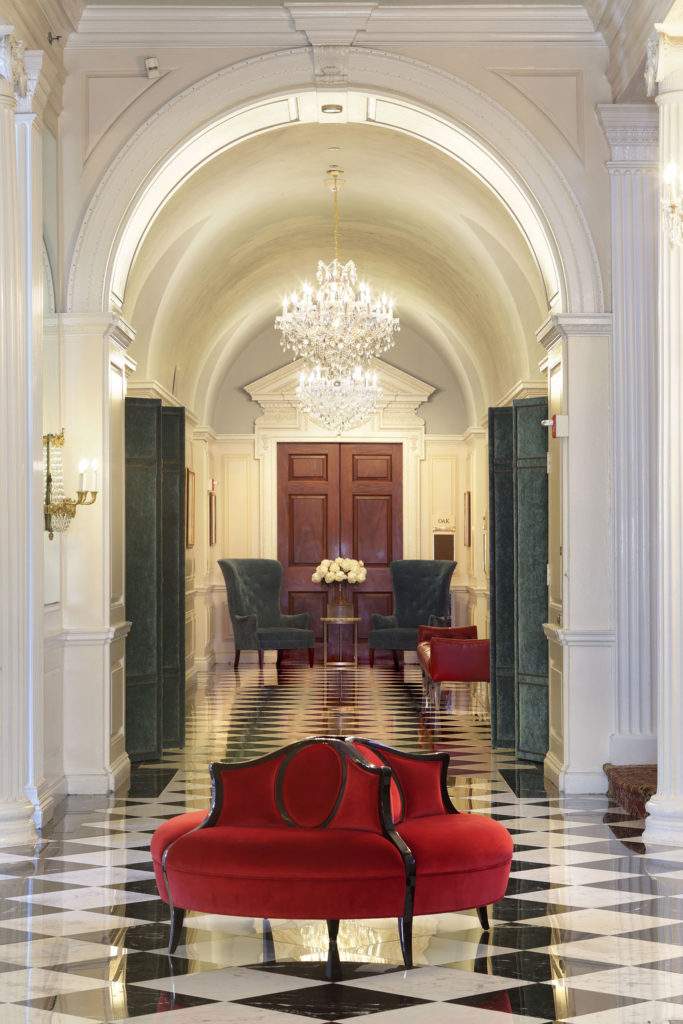 The Sixties were not kind to historical architecture. Preservationists are still lamenting the teardown of the original Pennsylvania Station in Manhattan, among other, similar travesties too numerous to mention here. That the Glen Cove Mansion survived at all is unusual, as so many of the “white elephants” on Long Island’s North Shore met the fate of Penn Station. 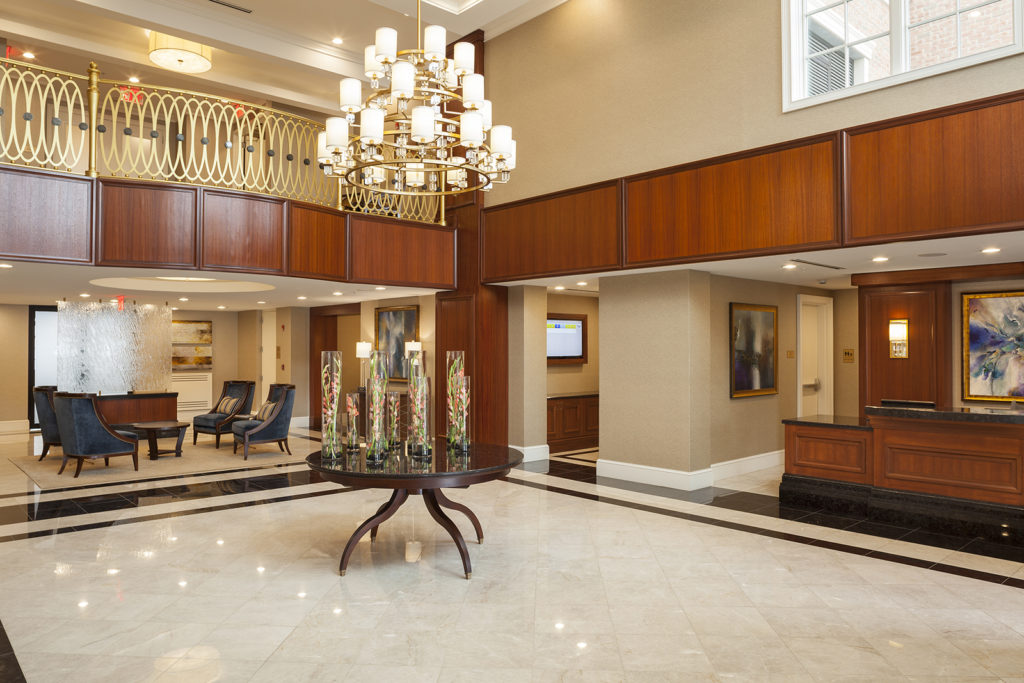 In the restored lobby, Safavieh employed new marble flooring—a black-and-white checkerboard laid on the diagonal. This historically correct solution complements the formality of the neo-Georgian architecture and breathes new life into the space. Designers Karin Krinsky and Joe Murphy placed a red confidente settee by Christopher Guy dead center in the room, a bold touch that echoes Dorothy Draper’s décor at The Greenbrier.

While it remained structurally intact, the Pratts’ home inevitably suffered various indignities in its new incarnation as a conference center. The marble checkerboard floor in the entrance hall, for example, was redone in wood and then carpeted over in less-than-elegant broadloom.

Enter the Safavieh design team of Joe Murphy and Karin Krinsky, which was chosen by the hotel’s new owners to restore the mansion’s original spaces to the “harmonious balance” that was John Pratt’s obsession. Says Murphy, “Our first commission was the lobby, where our first order of business was to replace the wood floor. Black-and-white marble, which we believe was architect Charles Adams Platt’s original solution, has done wonders to bring the lobby alive.”

Before the restoration, a beige marble floor looked drab by comparison. On the mansion’s exterior, the limestone-clad central bay and portico prepares guests for the grandeur within.

The trend in luxury hotel design is to fuse contemporary furnishings and art to a historical foundation. Accordingly, Krinsky and Murphy chose pieces by Christopher Guy to furnish the lobby. “We did this with a light touch because we wanted the focus to be on the original architecture,” Murphy notes. The renewed space could well be the lobby of a grande dame in London’s Mayfair, but it just happens to be in suburban Long Island.