In Search of Shanghai

Yes, it’s the top metropolis in the world’s busiest land. Did you know it also sparkles with history, culture, shopping and nightlife? 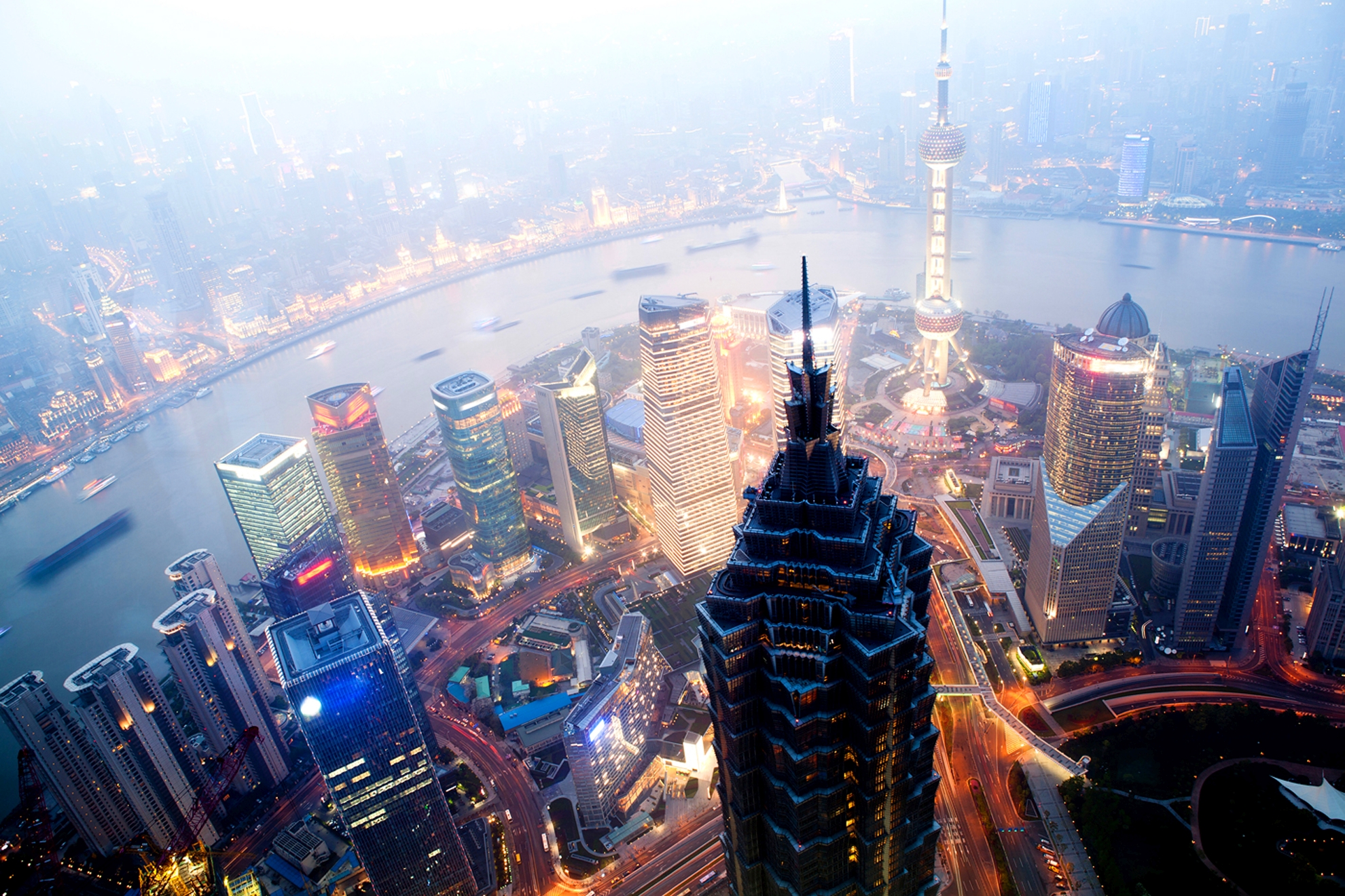 By some measures the world’s most populous city, Shanghai, China, has been a key commercial hub for centuries, but only in recent decades has its architecture soared so dramatically. Here’s the skyline at sunset.

When I first visited Shanghai in 1984, it was a cramped, backward-looking place still awakening from its long slumber under the reign of Chairman Mao. The hotels were musty, having for decades served mostly visiting Communist bureaucrats and diplomats. The Shanghai Museum of Art had dusty exhibit cases of antiquities, somnolent guards and few visitors. The streets were thronged with bicycles and the occasional VIP in a red-flagged limo. The old “concessions”—neighborhoods once administered by foreign powers—had been reduced to warrens of shambolic mansions in which dozens of families dwelt with clotheslines running out of windows. Memorably, I saw a jazz band of elderly Chinese gentlemen who played nightly at the venerable Peace Hotel along the Bund. (A bund is an embanked thoroughfare fronting a river.) The bar had hosted the likes of Charlie Chaplin and Noël Coward in the 1930s, and you could feel it.

Was it the same city when I went back this year? Well, yes and no. Shanghai is still a fascinating patchwork of China’s history, with many visible remnants of its imperial past and its expansion by the British more than 170 years ago as a base for selling opium to the natives. But today it styles itself “the City of the Future”—indeed, it’s a metropolis of futuristic towers filled with newly minted multimillionaires and conspicuous consumption of every brand name from Hermès to Ferrari. And the eightminute ride on the magnetic-levitation train from the airport reaches 267 mph and makes you feel you’re rushing headlong into times unknown.

The best place to bask in Shanghai’s 21stcentury excess is the Pudong financial district, with as many skyscrapers as 20 Manhattans and a neon display that for sheer exuberance outshines Times Square. Structures such as the 1,380-foot Jin Mao Tower (finished in 1999) and the Shanghai World Financial Center (1,614 feet, 2008) were superseded in 2015 by the 2,073foot Shanghai Tower, the world’s second-tallest building. The symbol of this mega-city, the 1,535-foot Oriental Pearl TV Tower, seems to be made from giant Tinkertoys.

The good news for traditionalists like me is that the Old City still offers a veritable maze of lanes that are well worth exploring on foot, with small markets and glimpses of street life. So does nearby Yuanmingyuan Road, which has some well-preserved turn-of-the-last-century buildings.

Want to go further back? The Square Pagoda was built in the Song Dynasty, about 1,000 years 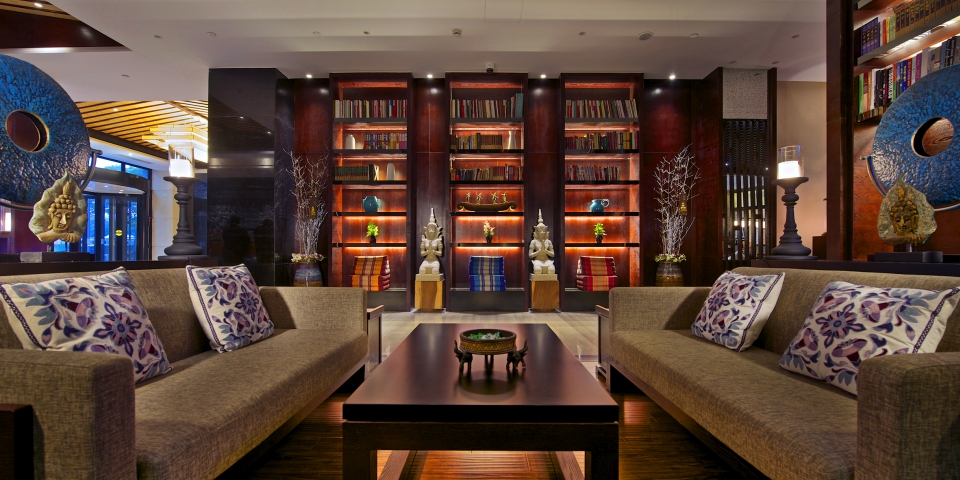 A guest room and a lobby reception area at the SSAW Boutique Hotel Shanghai Hongkou in a northern Shanghai neighborhood. 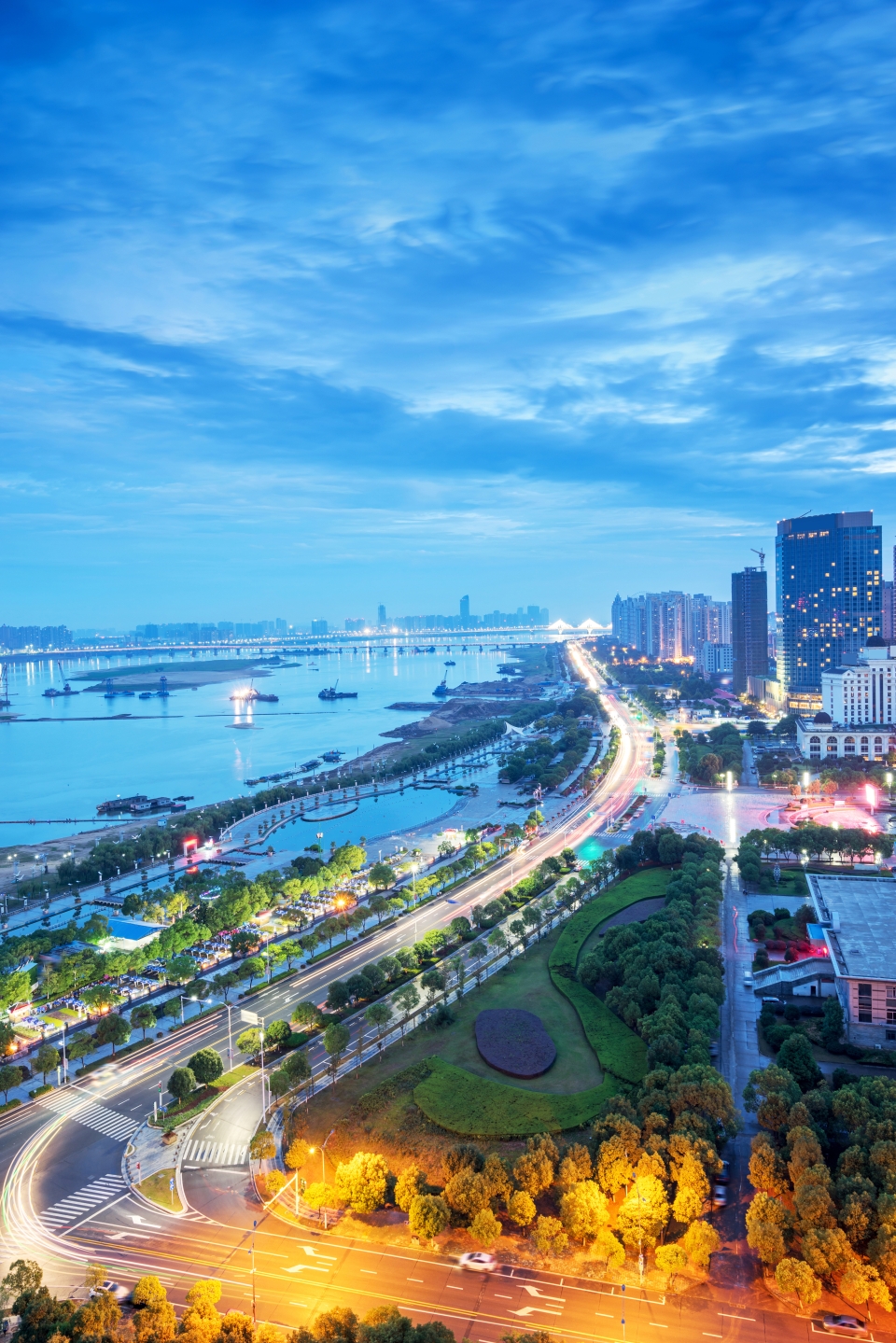 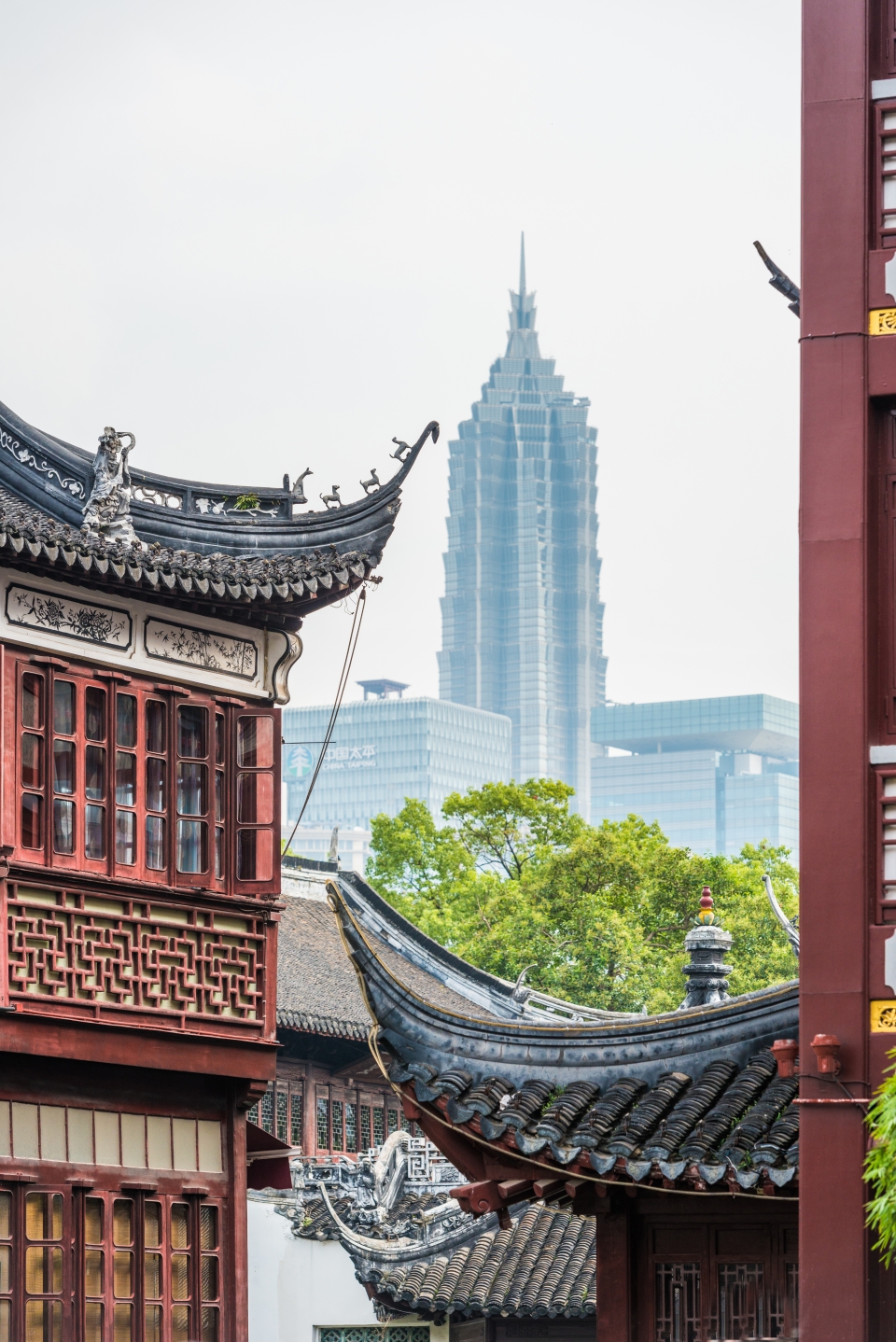 A characteristic Shanghai contrast between old and new. Opposite, Shanghai’s Pudong ﬁnancial district was an ambitious riverfront development project on the Huangpu River.

ago. This grand cultural relic looks like a wedding cake; it’s surrounded by ancient buildings and gardens. The former French Concession is also home to Fuxing Park, where old men follow a Far East custom, bringing pet birds in bamboo cages to hang on tree branches to sing while the men smoke and gossip.

What has changed most, perhaps, is the arts scene. The China Art Museum now has one of the world’s best collections of ancient bronzes, ceramics and calligraphy. The Rockbund Art Museum, a restored 1932 Art Deco building, is the place to go for strikingly fresh exhibitions. And the West Bund, becoming a world-class culture hub, includes an art center that is the site of an annual art fair, and the Yuz Museum, with contemporary works. The Long Museum West Bund was China’s largest private art museum when it debuted in 2014. Rivaling that, the colossal $2.5 billion Shanghai DreamCenter, with an animation studio and an entertainment complex with performance venues, is slated to open by the end of this year.

When it comes to dining in Shanghai, be sure to drink tea in the garden at the Ming Dynasty-era Annvita Tea Room on Fuxing Zhong Lu in the French Concession. Cha’s Restaurant, a traditional cha chaan teng (tea eatery) is owned by a Hong Kong movie producer. Din Tai Fung offers some of the city’s best soup dumplings (xiaolong bao), with a delicate skin wrapped around a juicy pork or crab filling. Jia Jia Tang Bao, in the Huangpu District, also has great dumplings. Jishi is small and crowded but serves classic Shanghai food, from tofu skin with mushrooms (fuzhu) to sweet-and-sour spare ribs (tangcu paigu) and crab with vermicelli sheets (xiefen fenpi). At night, head to Shouning Lu, which has street food cooked on portable grills, food carts and the aromas of roast duck and crayfish.

Post-dinner bar hopping is one of the best ways to get a handle on current Shanghai residents. The clubby rooftop Bar Rouge at Bund 18 is great for people watching. As for lodging, Shanghai has an ever-expanding roster of the world’s best luxury hotels, from Ritz-Carlton Shanghai, Pudong to Four Seasons Hotel Shanghai and The Peninsula Shanghai. I’m partial to the Park Hyatt Shanghai, an oasis of calm in a frenetic city. I also like Waterhouse at South Bund, a 19-room boutique hotel in a former 1930s warehouse—and an antidote to high-rises.

But I confess that my heart belongs to the old Peace Hotel along the Bund, now the completely redone Fairmont Peace Hotel. It’s sleek, sophisticated and modern, but luckily the management has restored the Jazz Bar, where a combo of Chinese gentlemen age 80 and up play jazz standards nightly. Cocktail in hand, I can almost be persuaded—once again—that I’m back in the Shanghai of the ’30s. 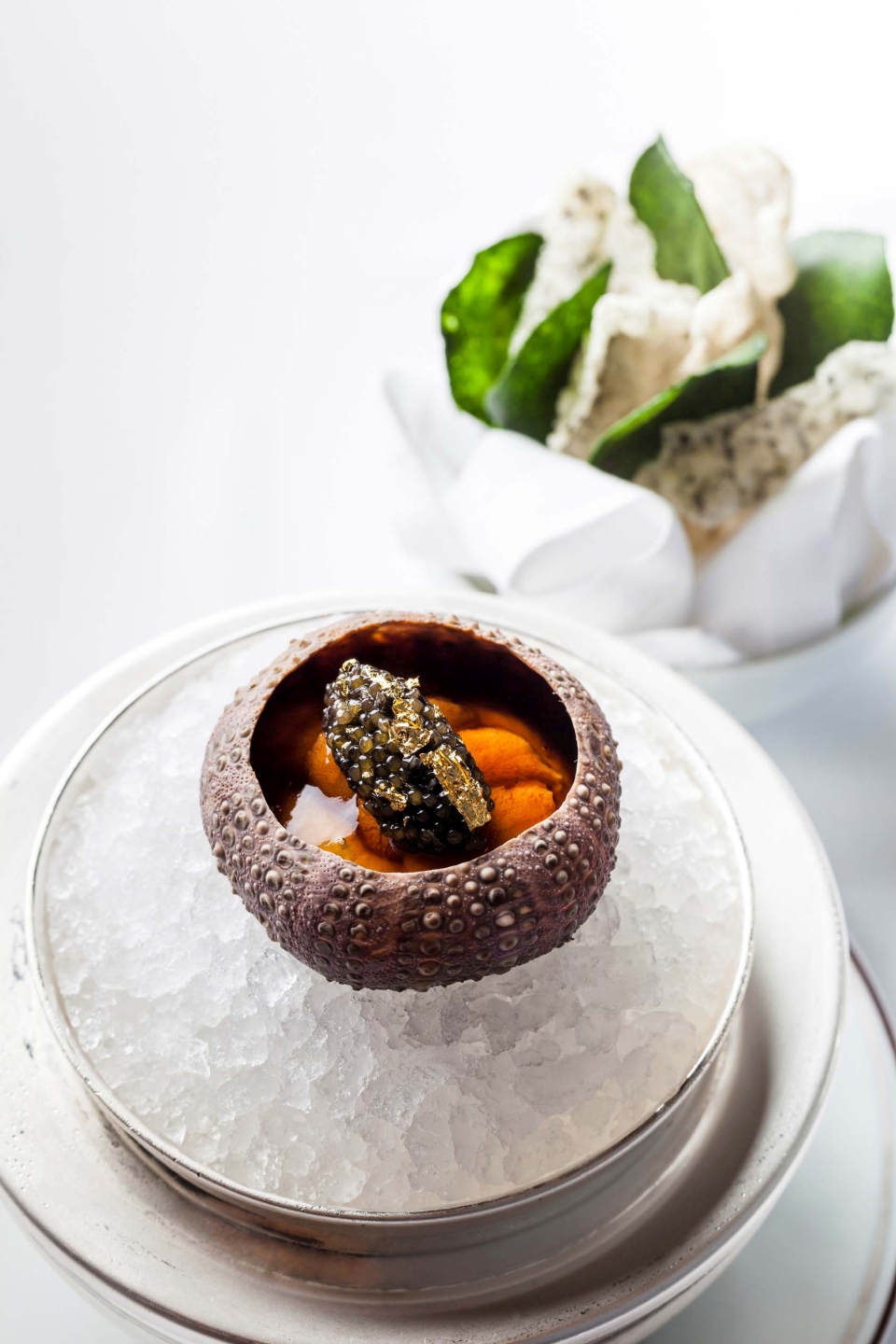 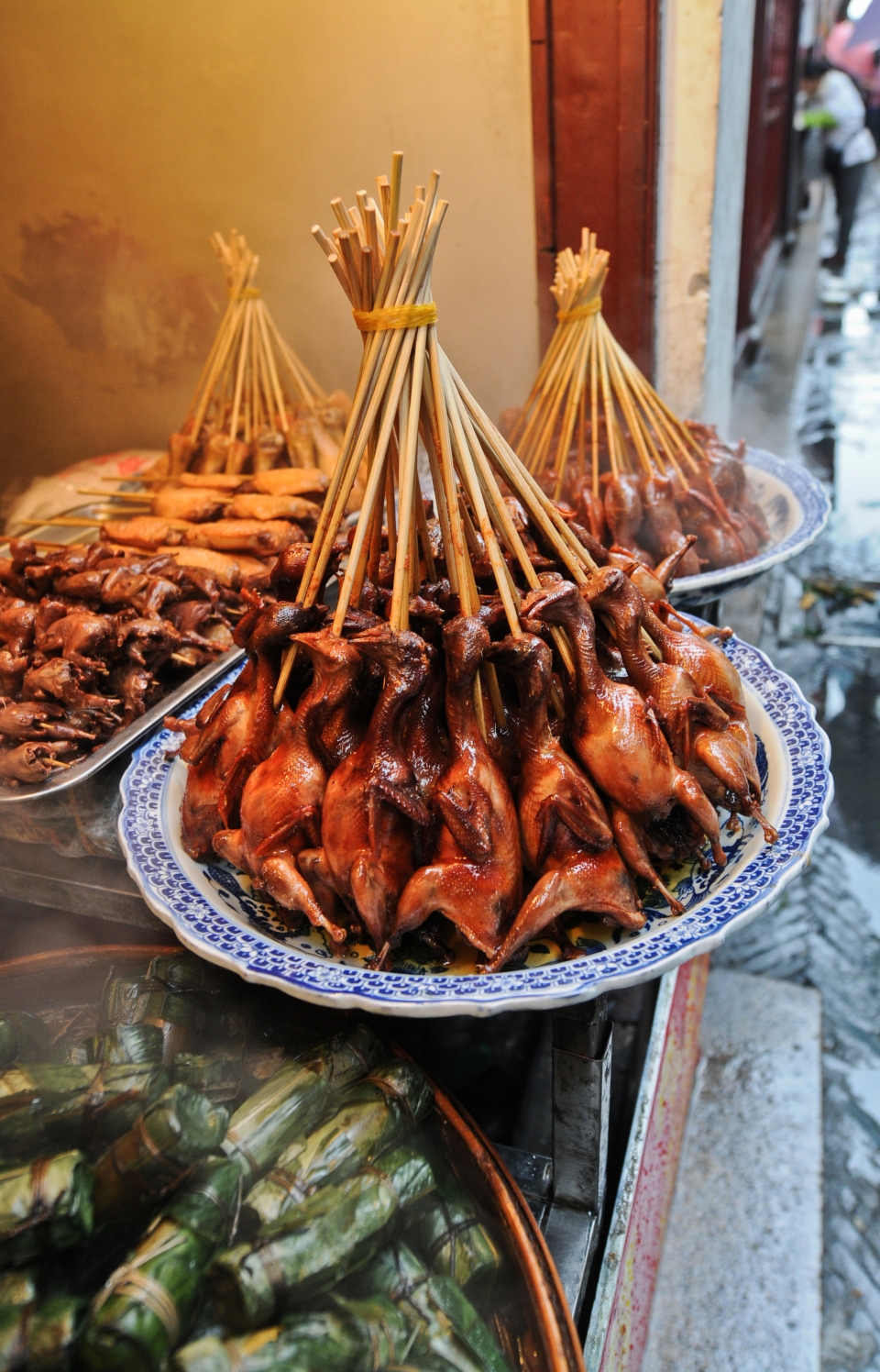 Fried pigeons on sticks at a market in Shanghai’s Qibao Old Street. 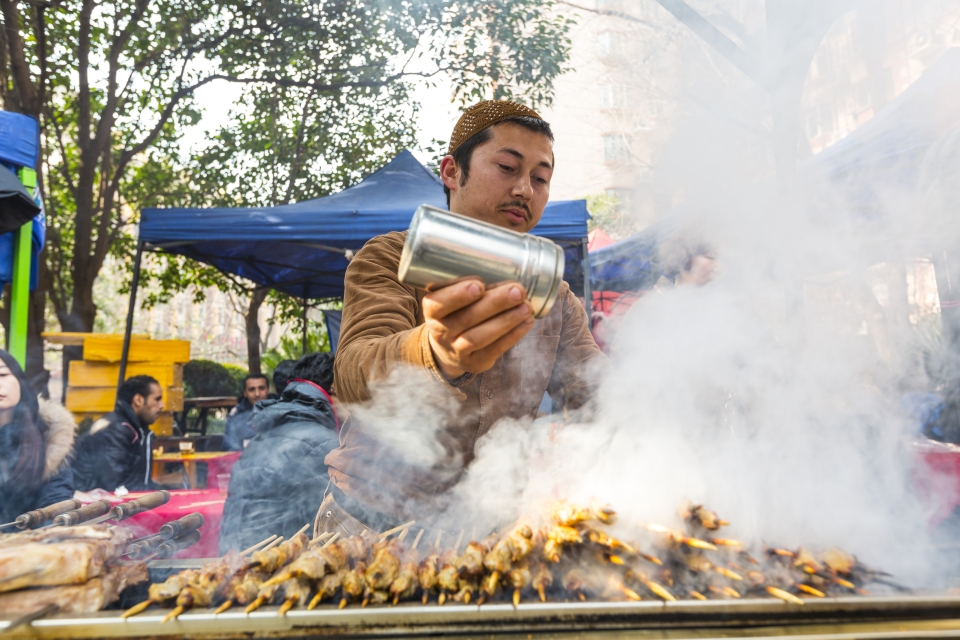