A couple calls on Safavieh to reimagine their prized pre-war apartment. 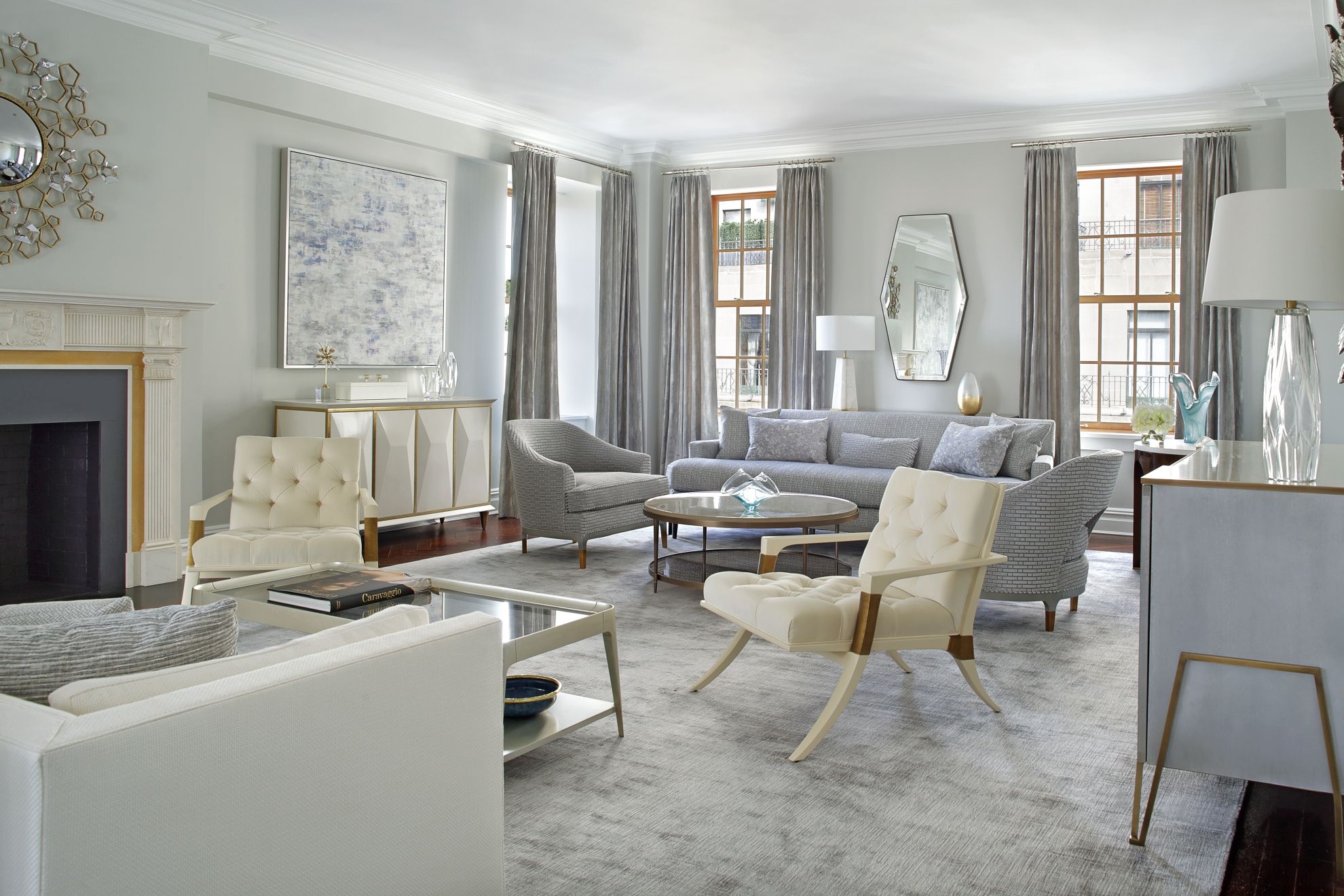 Except for the original marble fire surround, the living room of this pre-war apartment was given a total makeover. Acrylic, lacquered and upholstered contemporary pieces replaced mahogany predecessors. The mansion size rug was made to measure by Safavieh.

Large pre-war apartments in Manhattan are especially prized. When the owners of the one seen here were ready for a lifestyle change, they didn’t think of moving. They simply called on Safavieh to reimagine the place.

“If you saw ‘before’ pictures of this apartment, you wouldn’t recognize it,” says Iris Cavias, a designer based at Safaveih’s Glen Cove, New York, store, who tackled the project with her colleague Joe Murphy. “The rooms were beautifully furnished with the highest quality traditional pieces to match the pre-war finishes.”

“Rarely have I been part of such a total visual transformation,” notes Cavias. Every surface was refinished. Every light fixture was changed. Where there had been a forest of mahogany furniture, he brought in pieces finished in painted wood, metallics and upholstery.

“Dark wood was almost totally banished,” quips Joe Murphy, “but not quite: You’ll notice a mahogany desktop in the library. It sits atop a really stunning satin metal base—a beautiful modern context for dark wood.”

Repetition of colors helps tie together the various spaces, gray being the new master hue. Certain stylistic themes and shapes are also repeated. For example, variations on the klismos chair, with its outcurved legs and 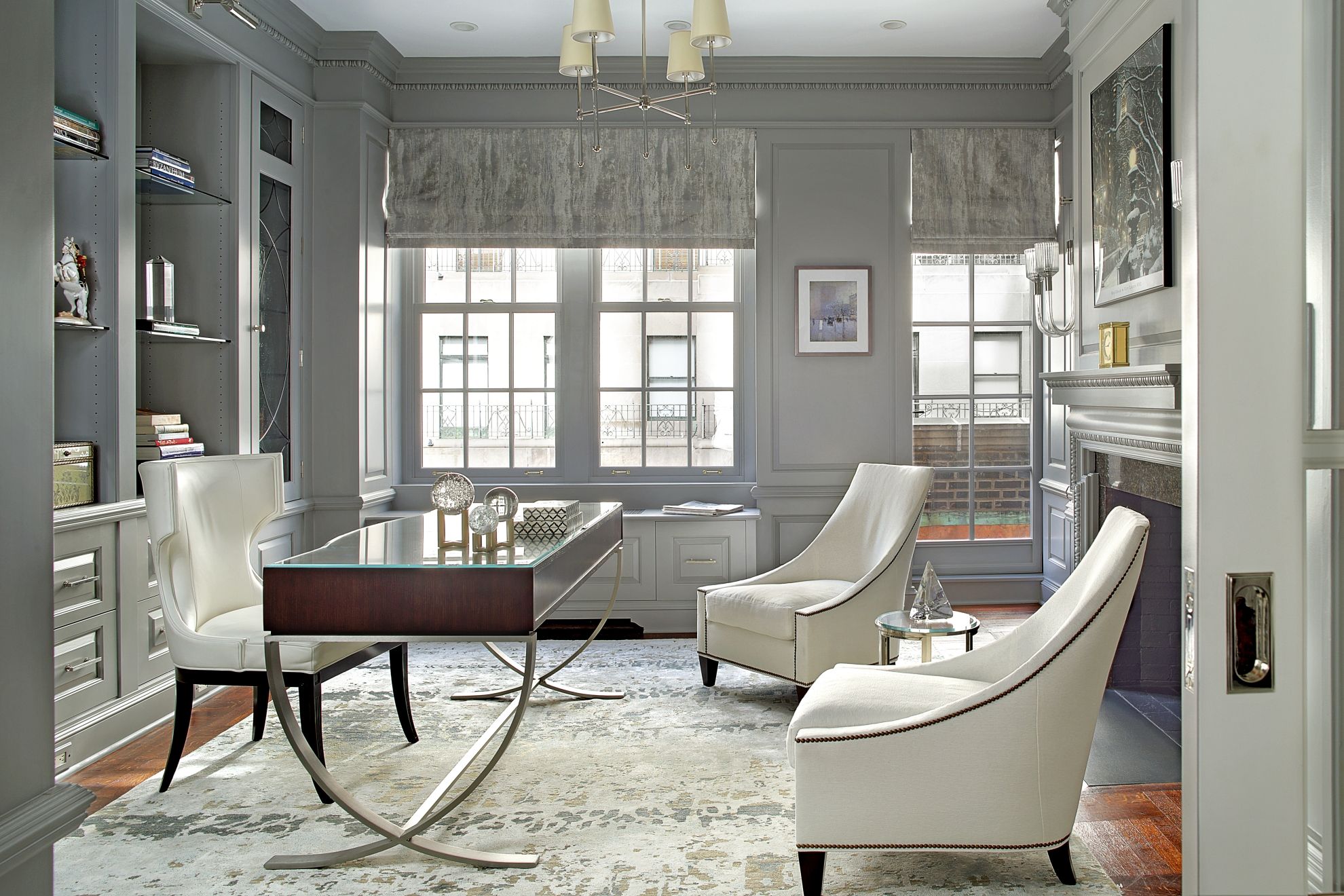 As with other rooms in the apartment, gray is the new dominant tone in the library. Traditional wood paneling was left in situ, but refinished in lacquer and given new hardware. The rug is from Safavieh’s Tiffany Collection. 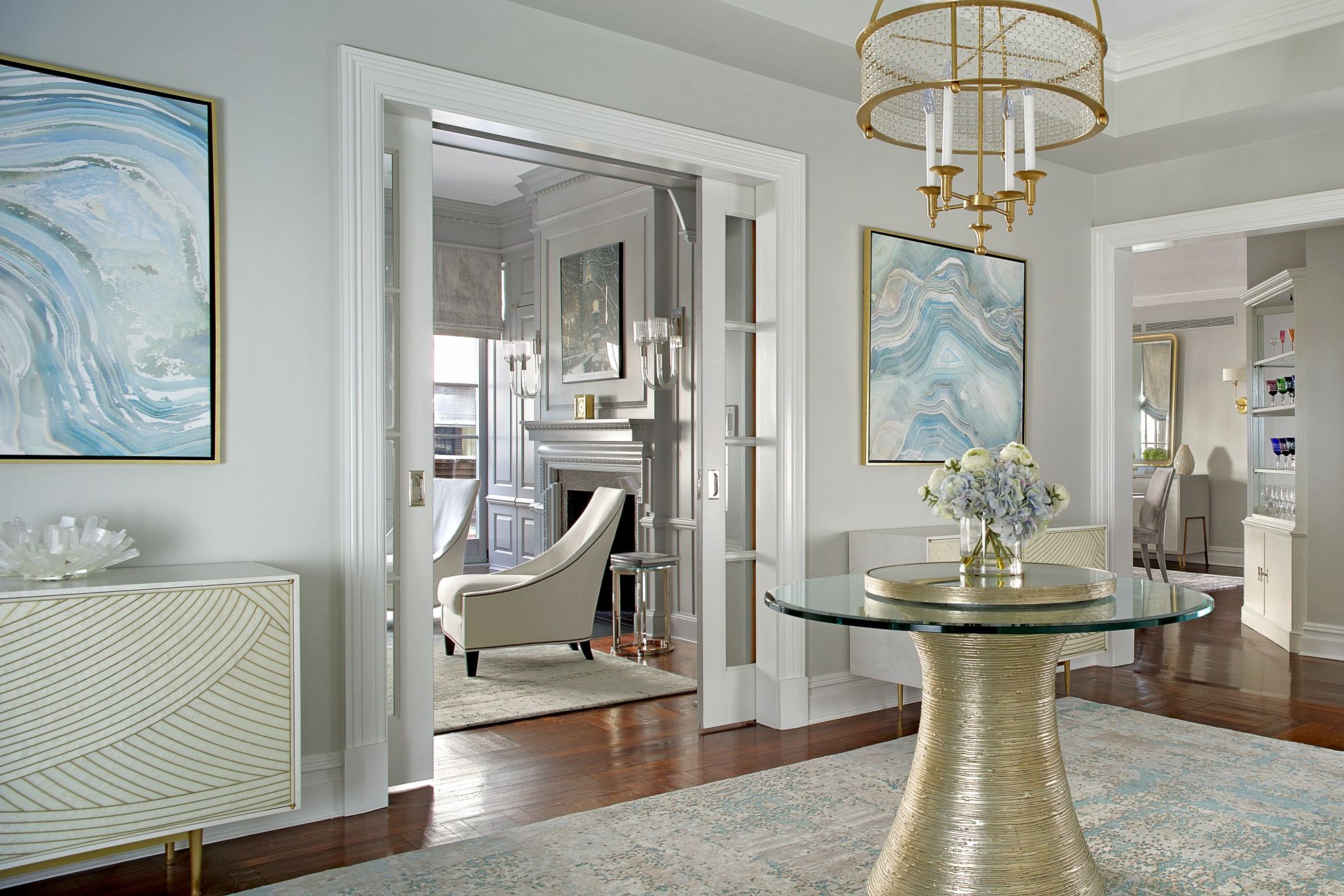 A symmetrical arrangement of paired consoles and paintings lends dignity to the foyer.

curved back, appear in most of the rooms, as do hand-woven rugs by Safavieh in shades of gray.

While the redesigned apartment has a totally new look, the project is also notable for what didn’t change. Walls were not knocked down, so the apartment still “reads” as pre-war, with a succession of defined rooms. Historic moldings and fire surrounds were left intact; any stained wood paneling was lacquered. “We didn’t want or need to mess with the architecture,” says Cavias. “The total transformation we achieved is a testament to the power of paint and new furnishings.” 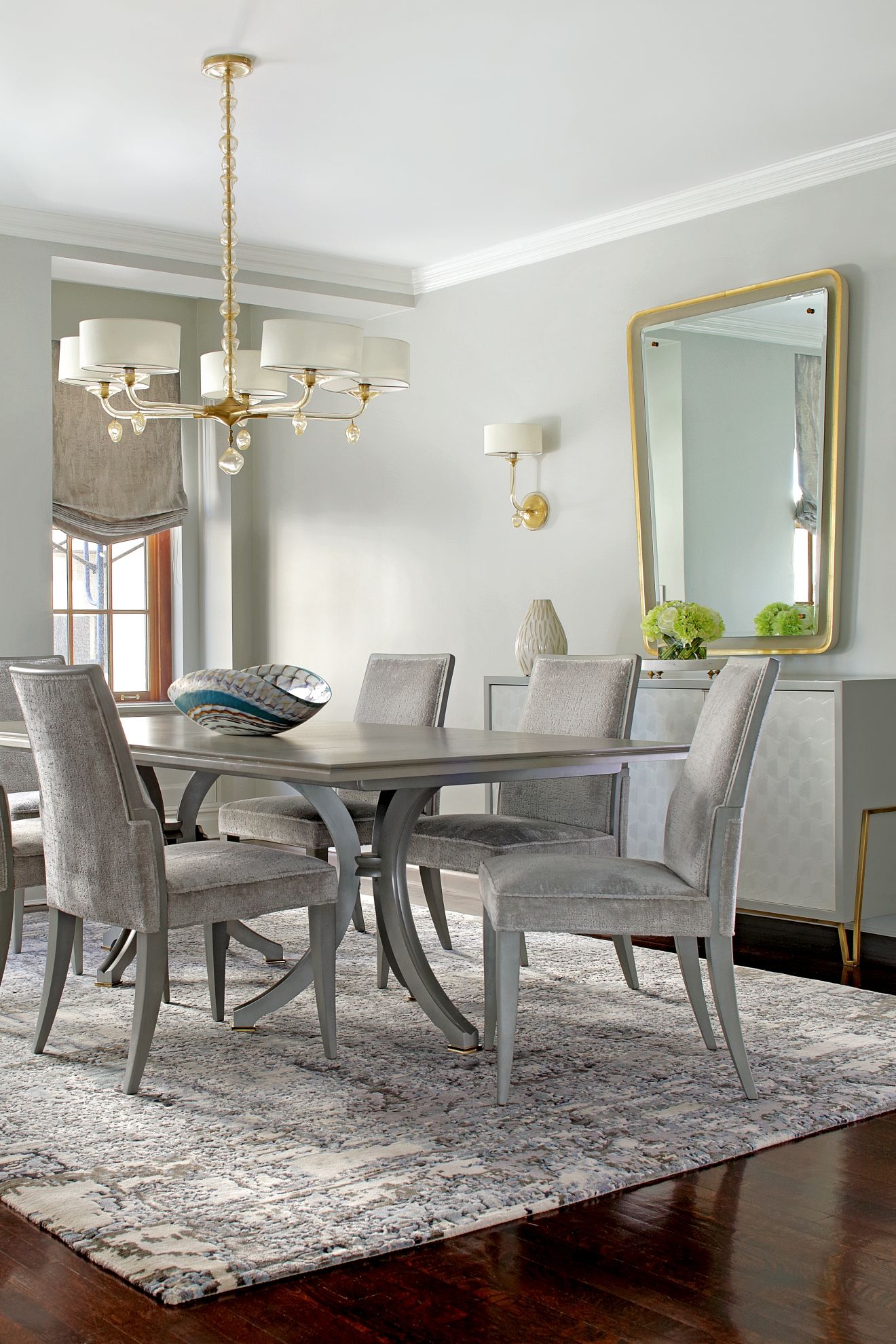 The dining room has the expected crystal chandelier and wall sconces—harking back to traditional forms but reimagined in a thoroughly 21st-century style. Every light fixture in the home was replaced with a current design. 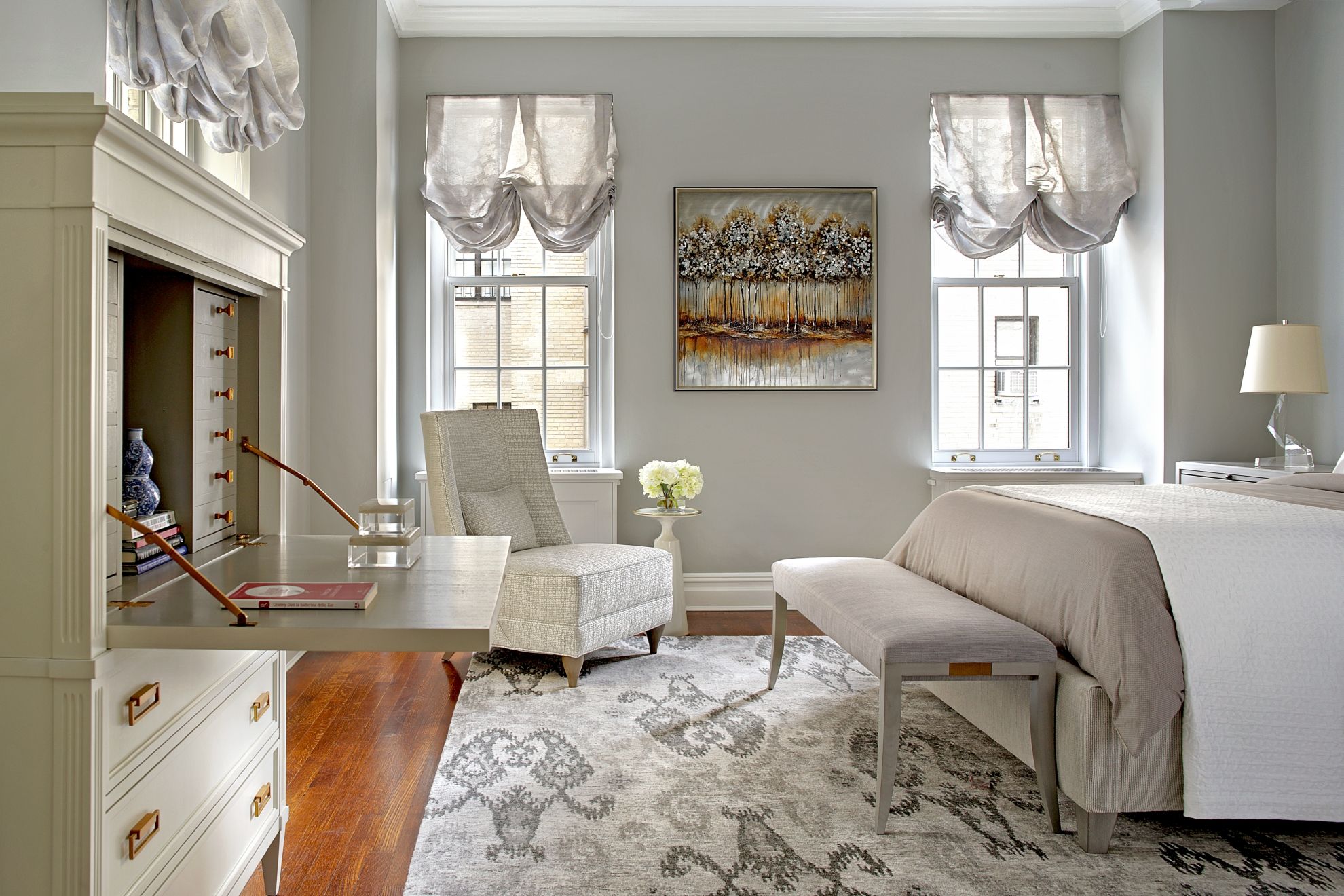 This light-filled bedroom isn’t just for sleeping. With its neo-traditional secretary and lounge chair, it’s the perfect retreat for reading or writing. The painting is from the homeowner’s collection.