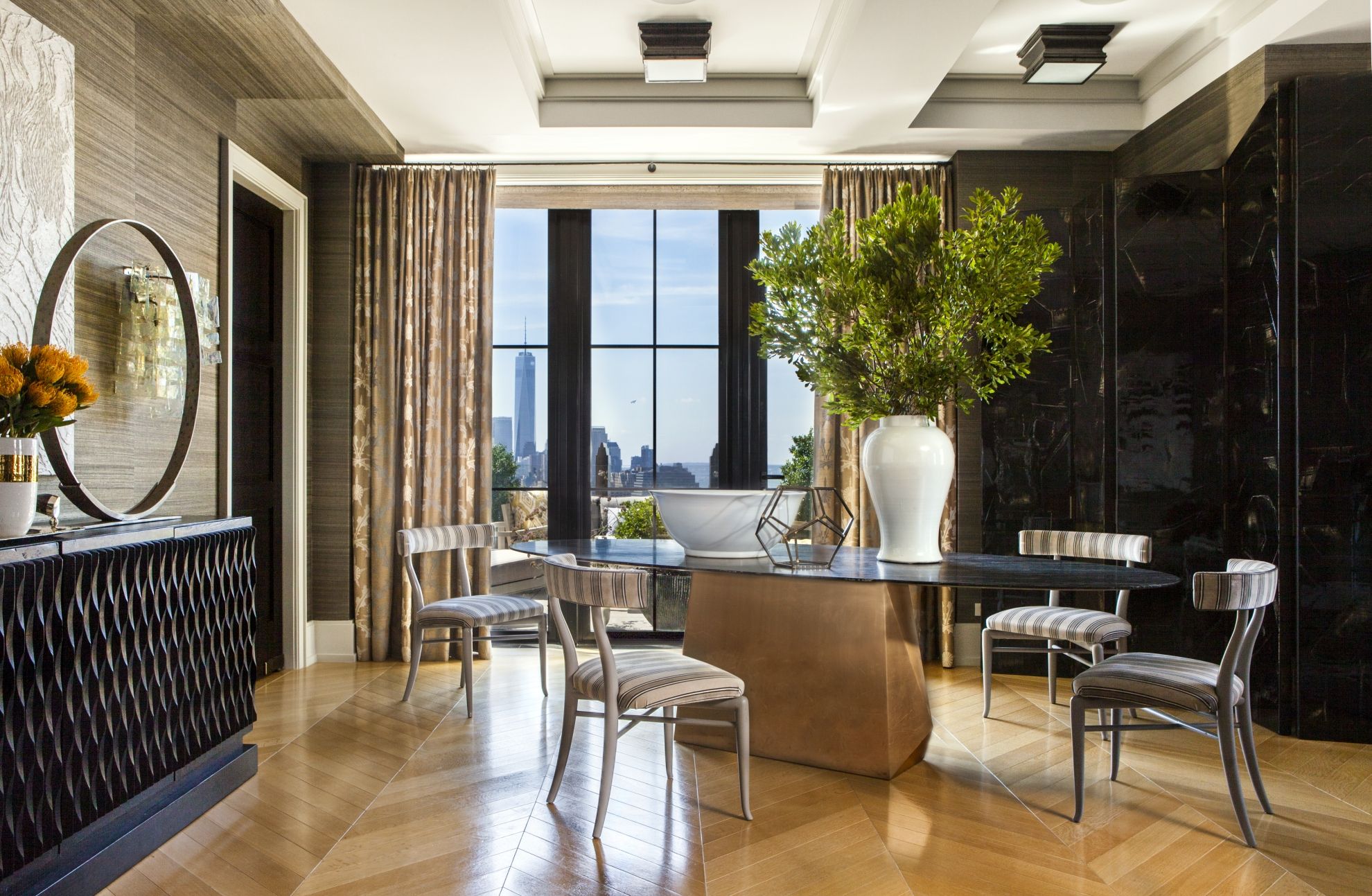 The dining room of this Walker Tower penthouse displays brilliant geometry: Designer Thom Filicia established strong diagonal lines with the herringbone floor and Coromandel screen. He then set the dining table, with its trapezoidal base and long oval top, on the diagonal. An array of klismos chairs contributes to the playful attitude.

Although few know his name today, Ralph Walker was as famous as an architect could be in his time. The American Institute of Architects dubbed him “the architect of the century,” and Frank Lloyd Wright, never one for praise, called Walker “the only other honest architect in America.”

Walker left an enduring stamp on New York City as the preeminent designer of Art Deco skyscrapers. His works include the Irving Trust Company Building 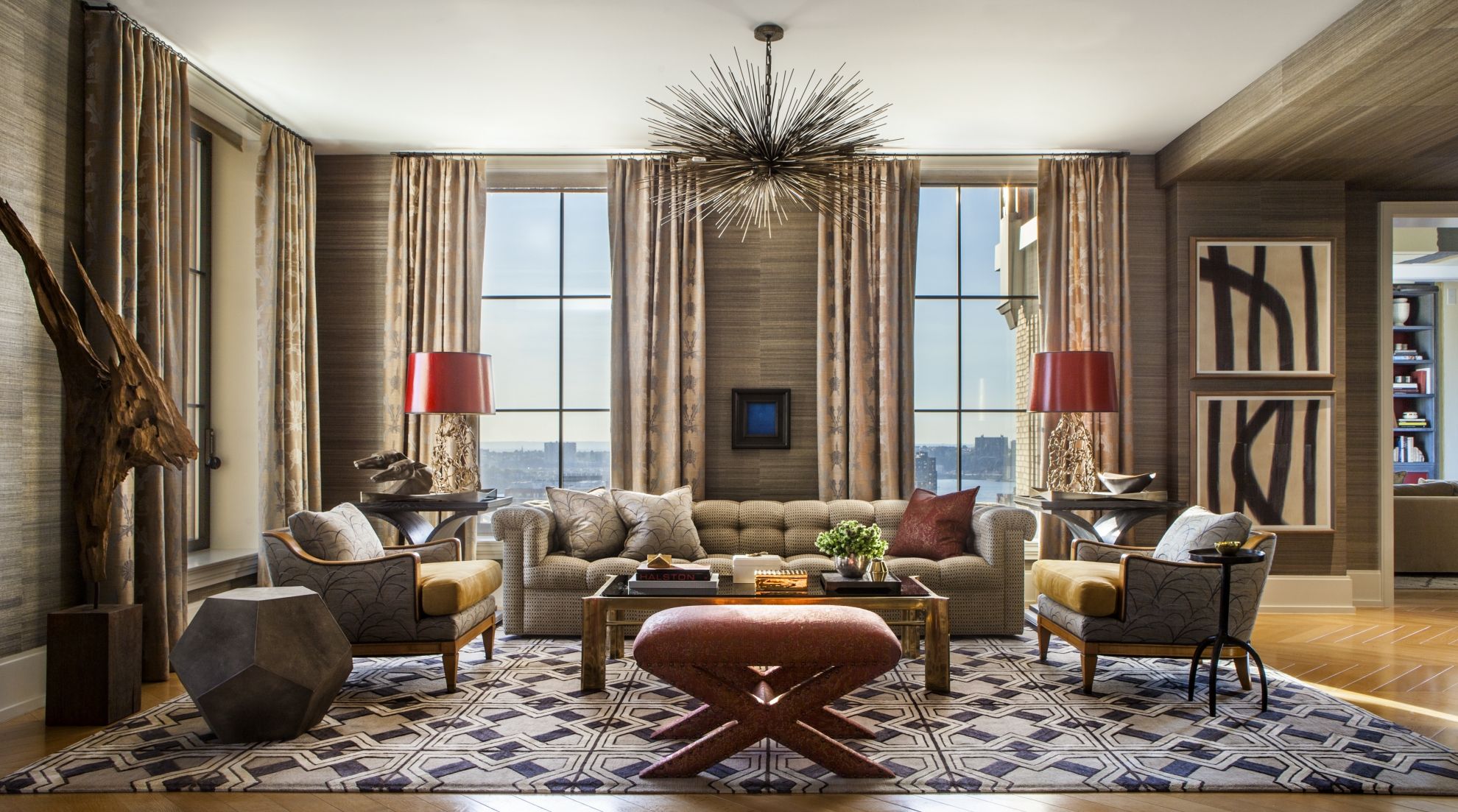 In the living room, a strongly patterned rug is echoed by an X-bench, the end tables and angular sculptures. A bristling bronze chandelier adds to the interplay of angles.

Because he rejected Modernism, Walker’s reputation suffered mightily. He died in relative obscurity in 1973, having shot himself in the head with a silver bullet that he forged himself.

Flash forward to 2013. In a more seemly act of creative destruction, developers gutted one of Walker’s masterworks, the office building at 215 West 17th Street, redeveloped it as residential condominiums, and renamed the place Walker Tower.

Blessed with 18-inch-thick exterior walls and 14-foot ceilings, the rocksolid and spacious tower apartments were bought up by A-listers. One of the penthouse units set a price record for lower Manhattan, ringing in at $70 million. In short, thanks to the Manhattan real estate boom and renewed interest in Art Deco style, Ralph Walker’s fame is on the upswing, and Chelsea’s Walker Tower is a coveted address.

It goes without saying that a penthouse in Walker Tower is a coveted commission for any interior designer. Certainly that was the case for Thom Filicia, the telegenic star whose design portfolio is studded with classically modern, personality-filled homes, whose client was an adventurous couple with four young children. To create a truly distinctive home, Filicia began where he always does: “I think it’s imperative to look at three elements for every project—the location, the architecture and the lifestyle. If you aren’t true to these three things, then the project will not be a true representation of the place, the point of view 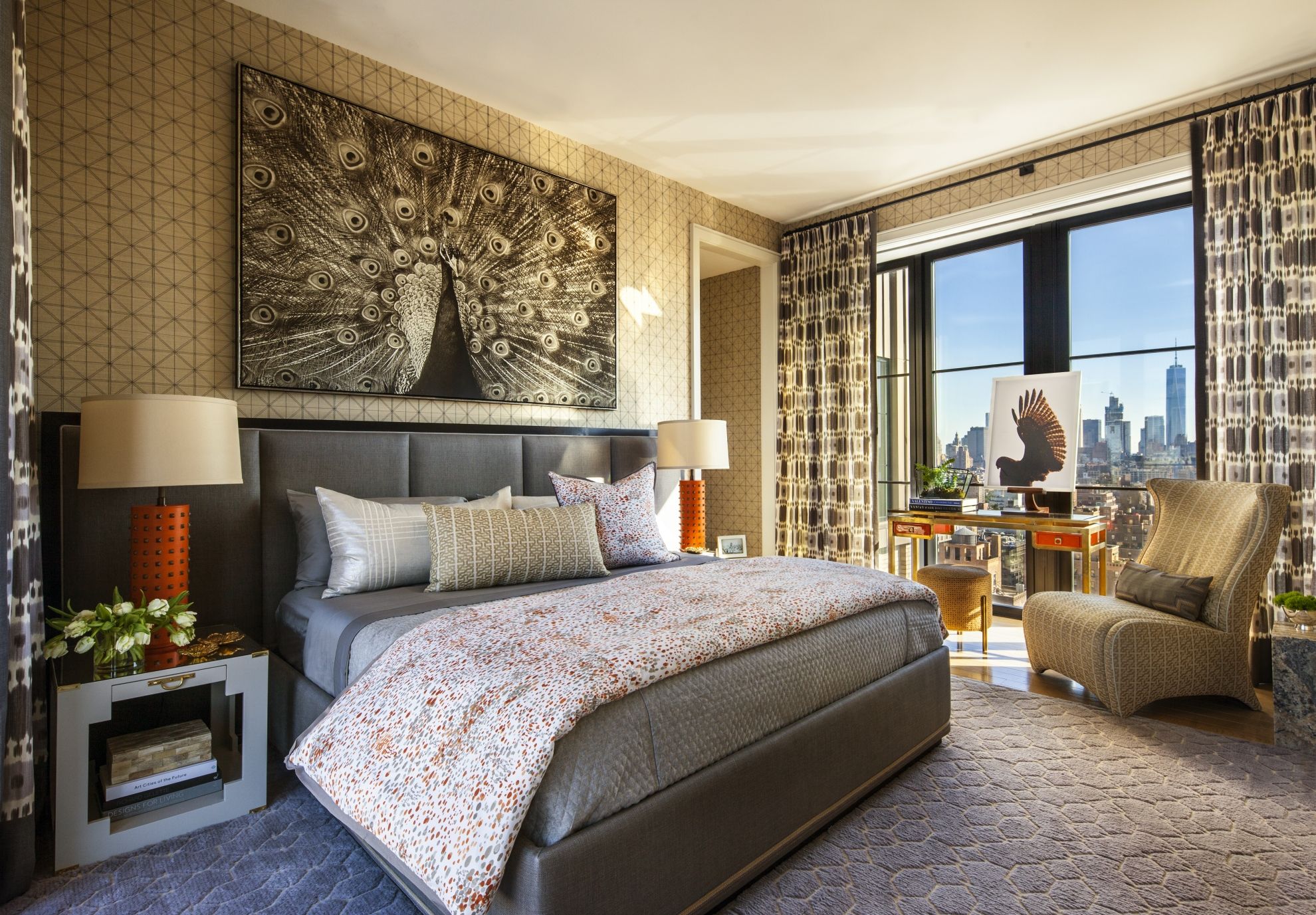 The master bedroom combines strong geometrics and soft textures. Bravura touches include orange studded-leather lamps atop mirrored bedside tables. In a space that features all the lavish patterning of a peacock’s tail, it’s fitting that the art above the bed depicts…a peacock.

and the people that live there.”

Here the situation called for a balancing act. Filicia envisioned a bold aesthetic and a somewhat playful, “young” attitude, but—partly in deference to the architecture—he wanted the décor to be tailored, luxurious and not overly modern.

Pattern-on-pattern was used to create a rich, layered look that helps connect the various elements and spaces, as does the repetition of warm gold and bronze hues. In the living room, for example, angular sculptures are echoed in the patterns of the rug. A bristling, bronze sunburst chandelier brings more angles into play; the fixture’s design is decidedly contemporary, but it’s also reminiscent of the custom 1920s hardware used throughout the building.

The dining room, too, offers a brilliant geometry lesson. A herringbone floor and a large Coromandel screen establish strong diagonal lines. These are echoed by the dining table, which is actually set on the diagonal. Its trapezoidal bronze base is topped by a thin, long oval stone slab. Striped klismos chairs keep the mood from getting too serious.

It helped that the homeowners were willing to take aesthetic chances. A thing that drives Filicia “crazy” is “people playing it too safe.” He adds, “It’s important to not only give the client what they want, but to push them to truly explore their point of view and go slightly further than they might have gone on their own and taking the design to a higher level.” Mission accomplished in Walker Tower.