An abundance of natural light set the stage for creating the perfect year-round vacation home in Bridgehampton.

As painters from William Merritt Chase to Willem de Kooning appreciated, there really is something special about the light in the Hamptons. A savvy architect took full advantage of the light in planning this Shingle style house on Paul’s Lane in Bridgehampton, where ranks of French doors are topped by transoms that reach almost to the 12-foot ceilings.

The house presented a perfect blank canvas to interior designer Ron Marshall: “While this isn’t my client’s primary home, they do use it year-round. To take full advantage of the abundance of natural light in all seasons, and preserve a ‘beachy’ feel even in winter, I kept the palette very light for almost everything—walls, rugs, painted furniture, upholstery and even artwork.” Call it 50 shades of white. 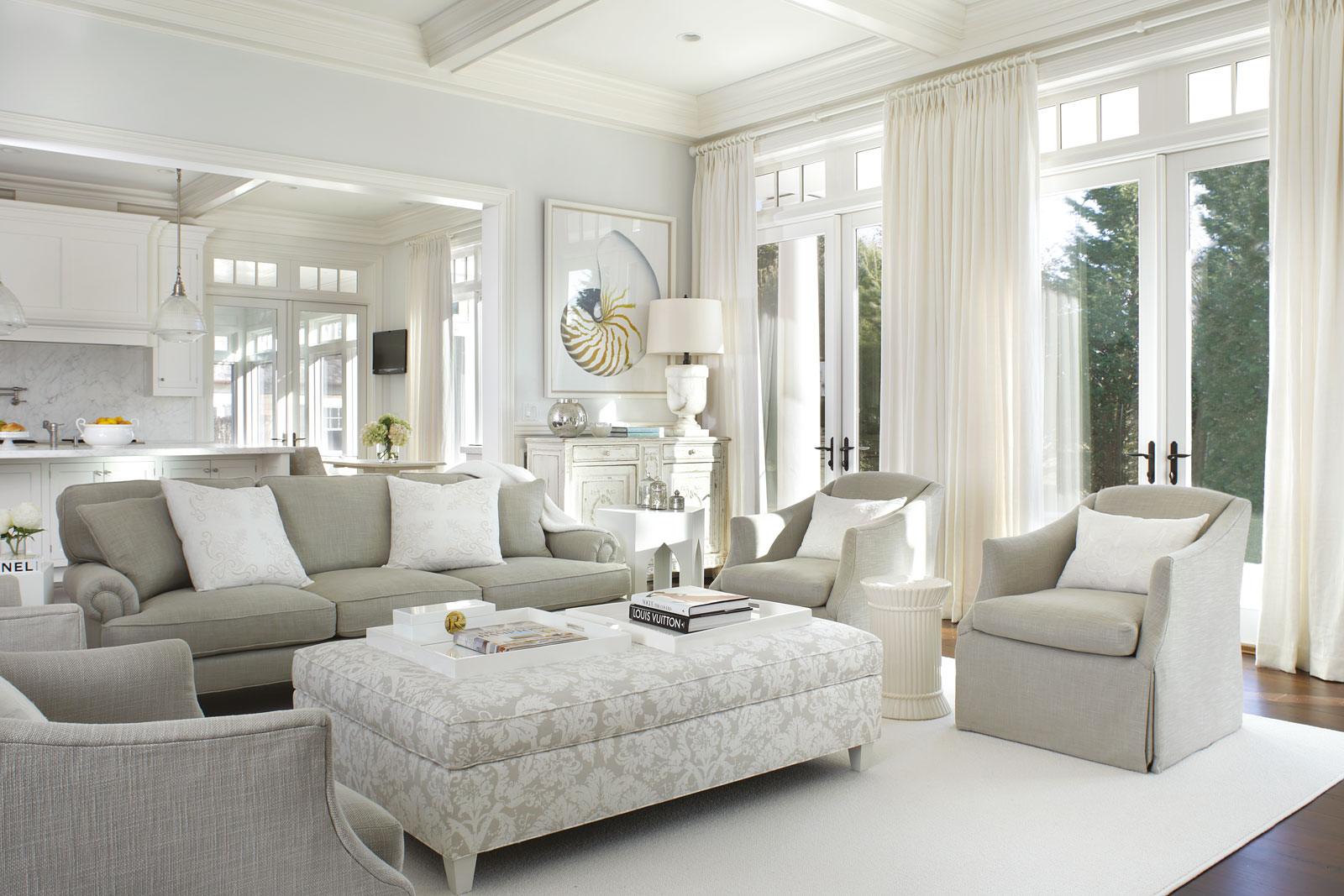 The living room, kitchen and sun porch beyond are a study in light neutrals.

He made an exception to this rule in the bedroom suite of the clients’ teen-age daughter. While white still predominates, there is also a lot of navy blue and eye-popping splashes of fuchsia. The effect is a bit nautical, youthful without being at all childlike, and very much at-the-beach.

In a house full of coffered ceilings and other traditional architectural elements that hark back to seaside “cottages” of a century ago, Marshall used a mix of transitional and contemporary furnishings for an up-to-date look that’s very much in tune with old-meets-new Hamptons taste. 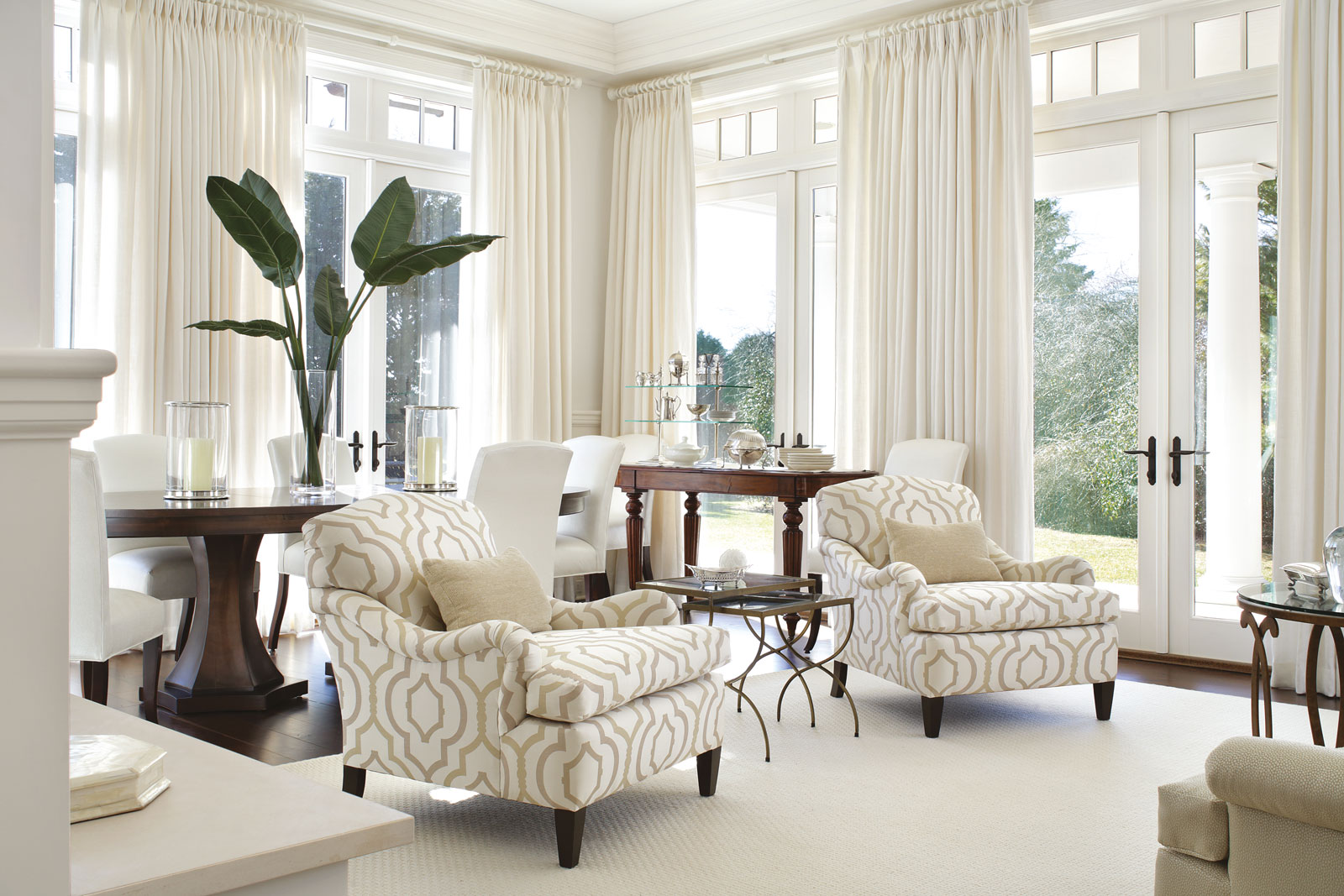 Instead of a formal dining room, Ron Marshall fashioned a kind of cocktail lounge with a dining area. Where a traditional sideboard would have been too heavy, he used an English server topped with a glass étagère. Not seen in this view is the built-in wet bar.

He also employed one of his signature touches, the introduction of an occasional item of antique furniture. Polished and patinated wood pieces, such as an Austrian chest of drawers in figured black walnut, which he placed in the entrance hall, and a Scottish longcase clock in mahogany by the clock-maker to the Queen (that being Victoria), which graces an otherwise unfurnished corner of the living room, provide a sturdy, historical anchor to a contemporary interior.

In a transverse hall on the first floor, the décor represents simple, beach-house elegance at its best. The seascape is by the owner.

“I often encounter resistance to the use of antiques,” says Marshall, “which is a shame, because they can work in complete harmony with a modern scheme, and as a grace note, they have the effect of making everything contemporary look especially fresh.”

To keep antiques and reproduction furniture from looking like a museum exhibit, a good rule of thumb is to use pieces from the same country but different historical periods or, conversely, from different countries but a single historical period. In this home, Marshall opted for the latter: All of the significant antiques are from the first half of the 19th century. 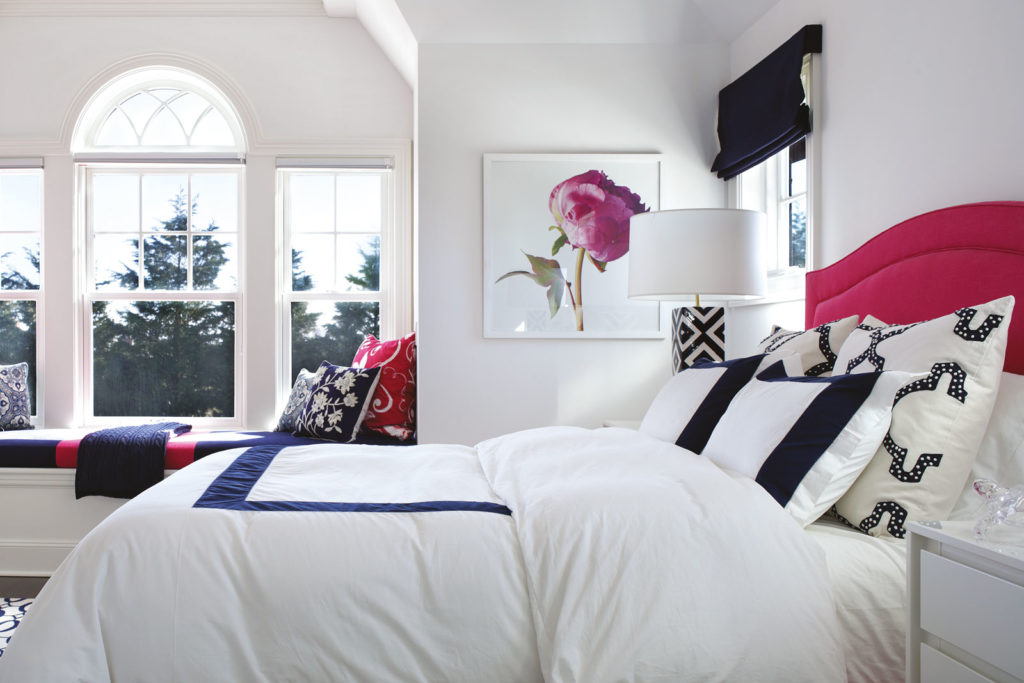 Bright and unfussy, the daughter’s bedroom is amped up by a fuchsia headboard, a painting of a peony and other colorful touches.

“I was blessed on this project,” he continues, “because the client is a dear friend. She loves art and furnishings from many historical periods, but she wanted her Hamptoms home to look upto- date. Our go-to resource was Safavieh’s Stamford, Connecticut, store, which is near her primary residence, and Judy Sullivan, a Safavieh designer based there. We had a lot of fun working together, and I think that comes through in the finished rooms. They look great in any light.”

In the library, books and bibelots share space with natural specimens. The color photograph of an underpass in New York’s Central Park is by Peter Lik. In the adjacent entrance hall, an Austrian chest in black walnut is home to one of the owner’s prized “pets,” a 17th-century English marble sculpture of a lion.