Prewar apartments are prized for spaciousness, graciousness and quality construction. A classic color scheme and sumptuous accents make this beauty shine for a new age. 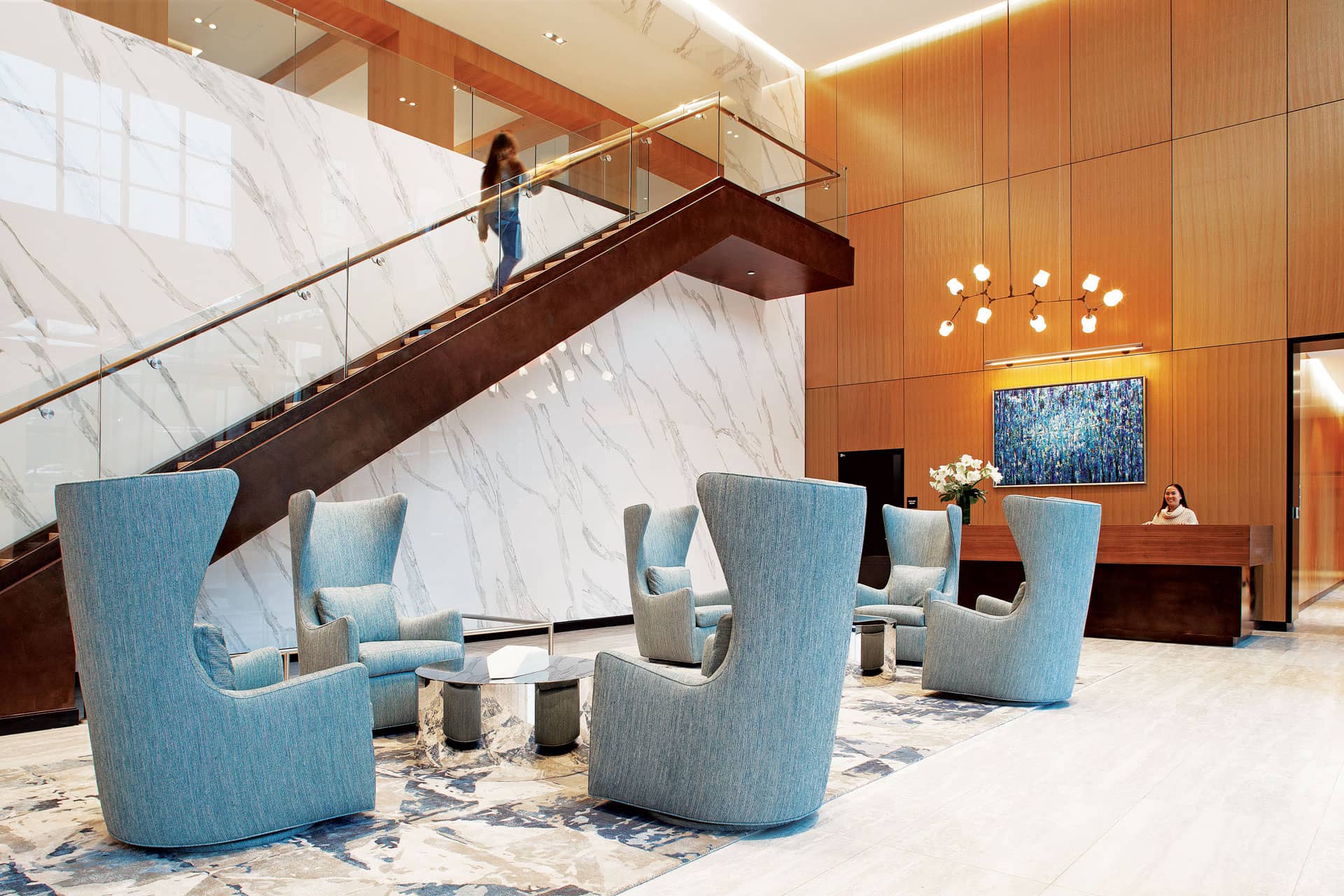 A cantilevered bronze staircase is the signature feature in the lobby of The Beacon’s luxury condominium residence. Safavieh’s
designer, Iris Carias, furnished the 20-foot-high space with oversized, futuristic wingchairs.

One might think monumental interior space calls for monumental furnishings, but architect Mies van der Rohe had it right: Sometimes less is more. The lobby of The Beacon’s luxury condominium residences at Garvies Point in Glen Cove, N.Y. is a stunning modern box (which no doubt owes a debt to Mies himself) that soars 20 feet high. Safavieh designer Iris Carias, who’s based nearby in the company’s Glen Cove showroom, used a light touch in furnishing the lobby so as not clutter the clean sight lines or compete with the architectural features, which include a cantilevered bronze staircase that ascends a sheer marble wall 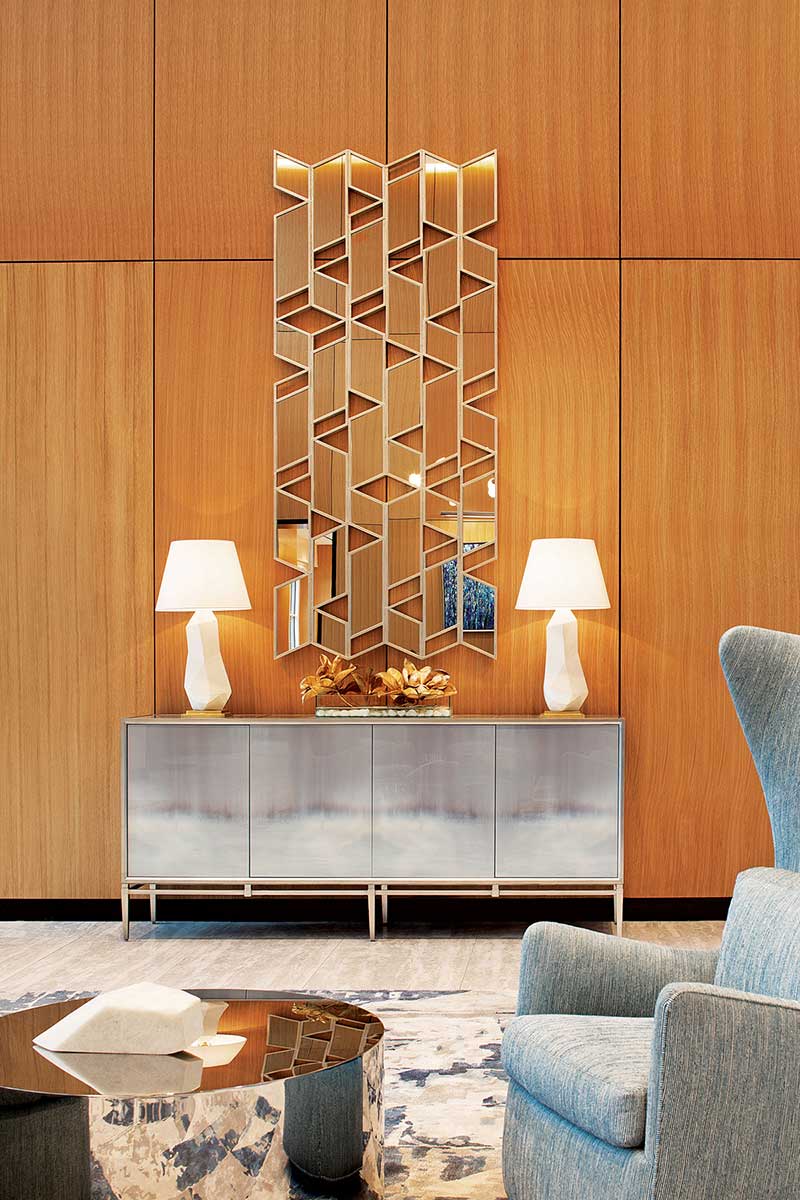 On a wall of the lobby, a towering, sculptural mirror emphasizes the height of the room. 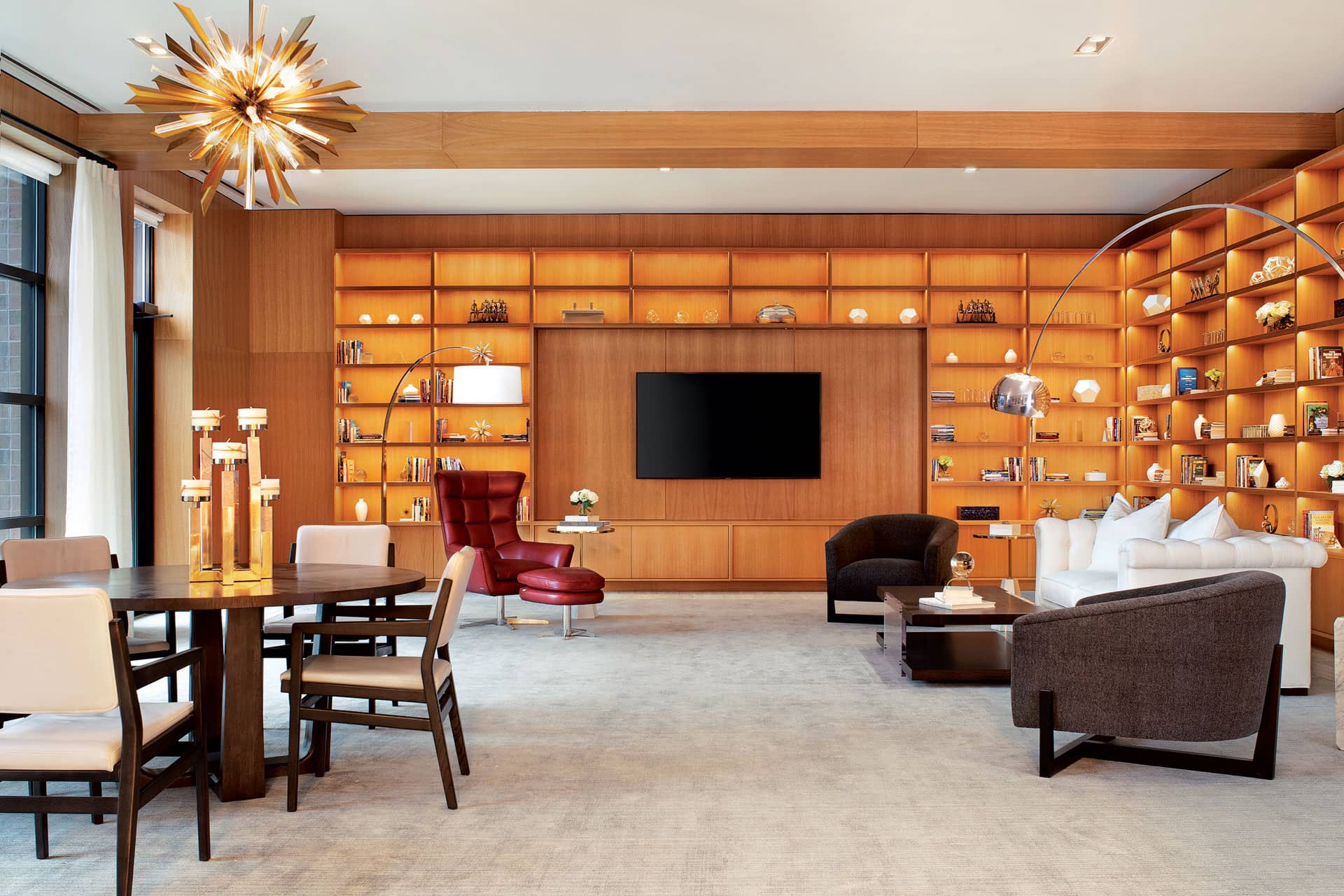 With its homey feel, the library is designed as much for socializing as for quiet reading. 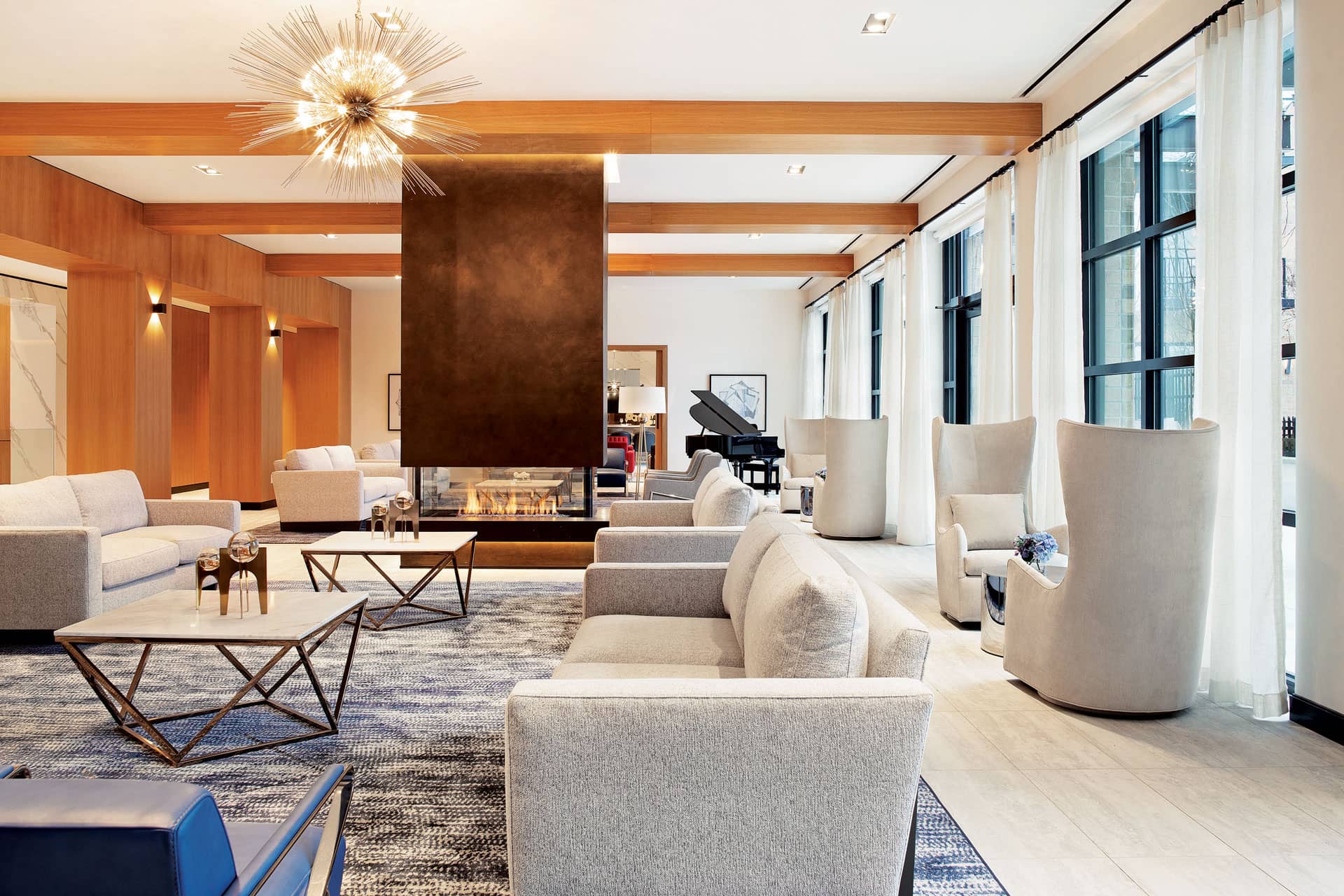 There are two identical seating areas in the lobby. Each comprises three oversized, transitional wing chairs that look like a hybrid of porter’s chairs and something plucked from the bridge of an intergalactic cruiser. These oversized chairs are centered around simple, polished nickel coffee tables.

Because of the need for large scale, the wingchairs were custom made, as was the area rug on which they rest. "You’ll notice we used colors that are bright and cool—a lot of blues—to bring the hues of the adjacent salt water indoors," says Carias. "We also had fun mixing metals—chrome, brass and bronze."

The lobby is just one of several amenity spaces at The Beacon. At the top of that bronze staircase is a cavernous lounge with a dramatic fire feature, a grand piano and abundant seating.

One end of the lounge is a library, with solitary seating for reading, as well as group seating for socializing or even playing cards. "It’s meant to be home-like, and decidedly unlike a public library," says Carias. 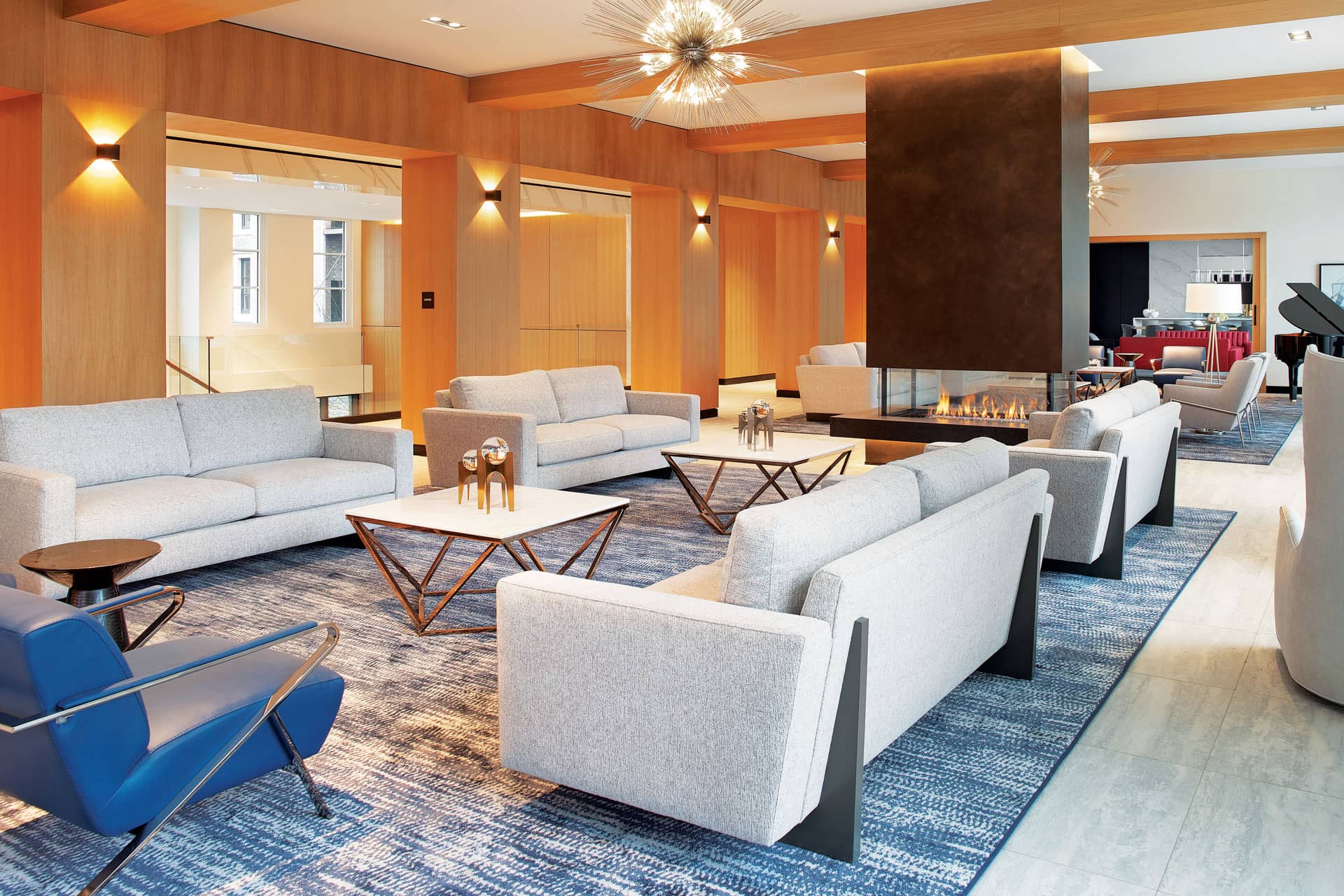 Overlooking the Beaco lobby, the lounge is designed to be the social hub of the new residential building. Safavieh’s Iris Carias made sure the space holds visual interest from every angle. With their external wooden supports, the architectural sofas look good even from behind. Seen in the distance is the clubroom, with its signature red sofas. 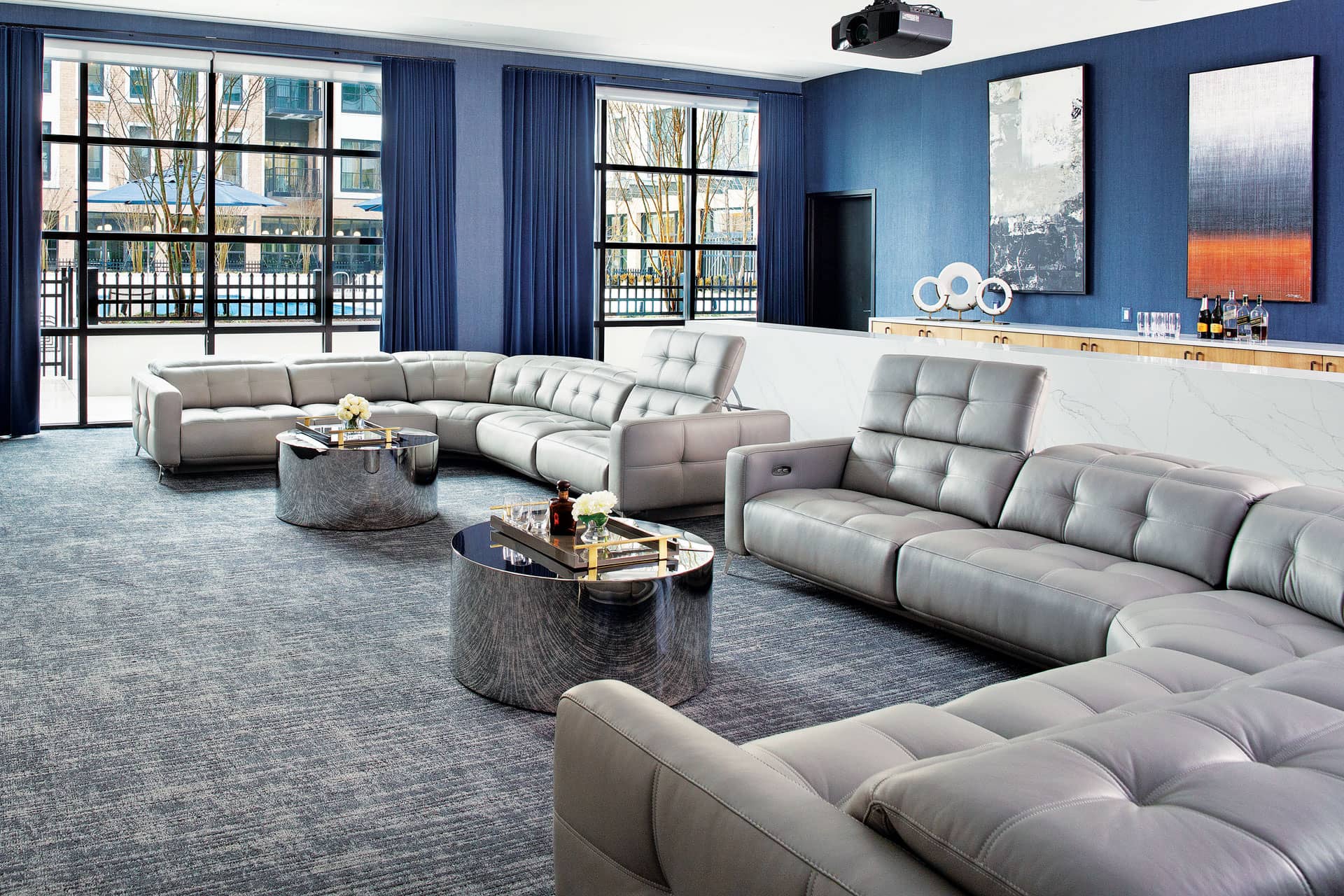 With its large, reclining sectional sofas, the screening room was designed to look more like a home theater than a movie palace.

At the opposite end of the lounge is the clubroom, with its long bar and equally long live-edge dining table. "The palette here is quite neutral," notes Carias, "but we punctuated it with bright wall art and two red sofas, because this is, after all, a party space."

Beyond the clubroom is a game room, featuring a custom billiard table and two seating areas—one facing a fireplace—for added coziness. And beyond the game room is a screening room. "The goal was to create a modern space—not a traditional movie-theater lookalike," says Carias. "And again, we wanted a home-like feel rather than a commercial look, so we used huge sectional sofas and cocktail tables." The gray and blue color scheme pays homage to the window views of open water.

With her Safavieh know-how, Carias succeeded in making The Beacon's large amenity spaces feel homey, much
like a private club, all the while reinforcing the coastal sense of place. 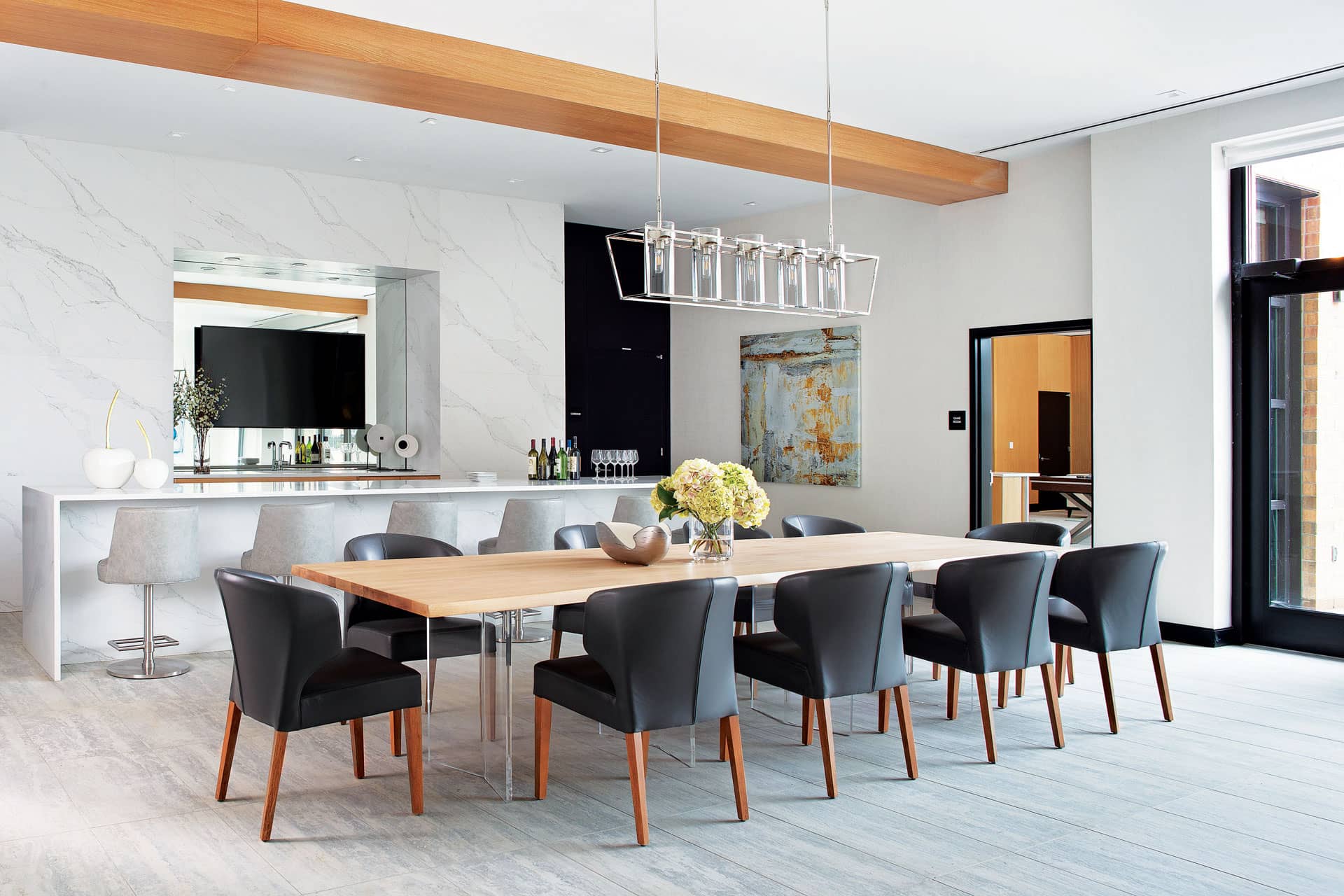 The clubroom features a long bar and live-edge table, making it suitable for meetings as well as private parties. 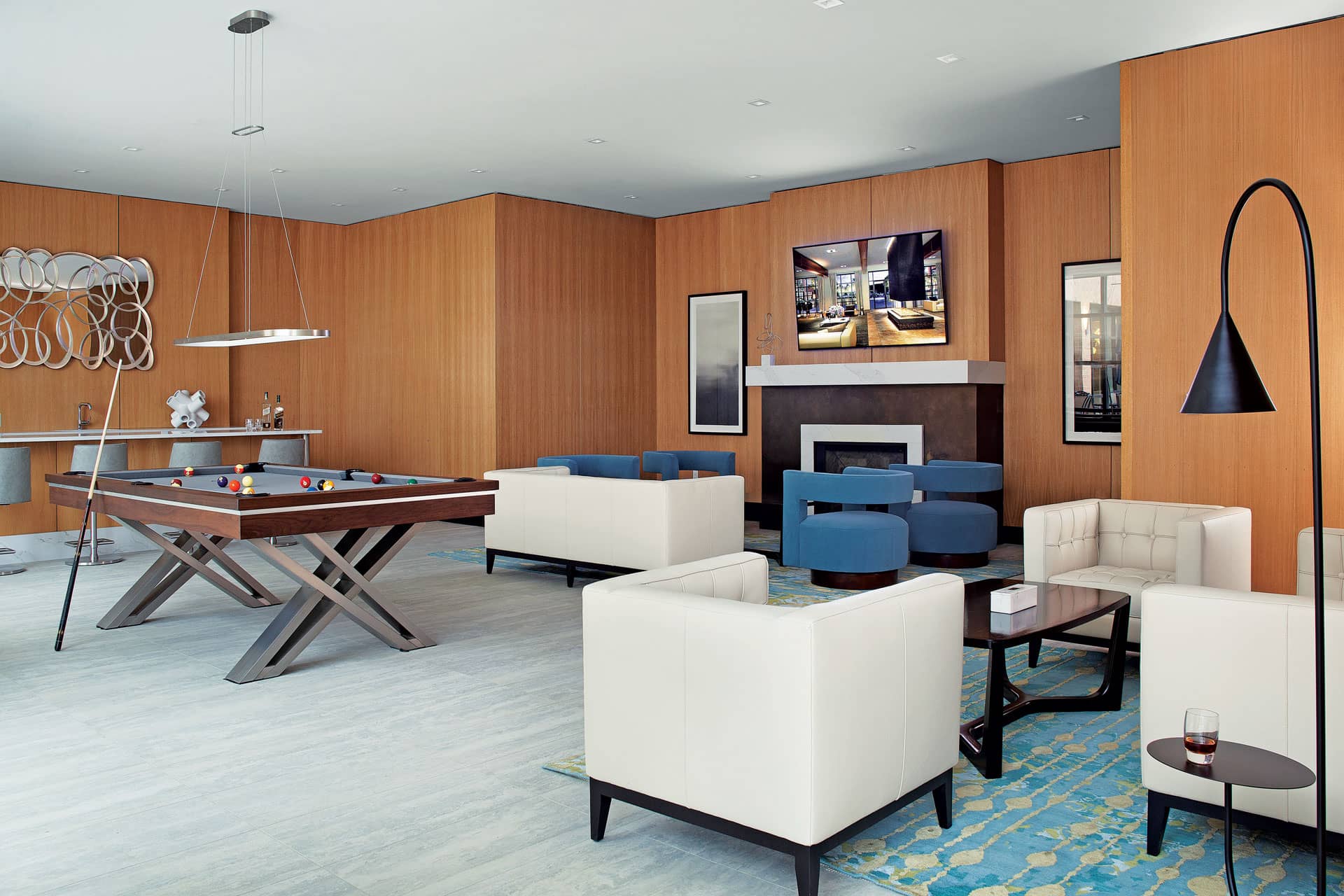 The game room has a gorgeous custom billiard table and intimate seating groups.