A Twist On Tudor

Rich in historical detail, a monumental new home accomplishes the improbable: It feels like a place for relaxed family living.

Massive wrought iron gates hinged on red brick pillars, relics of a Gilded Age estate, suggested the architectural style for a new house to be erected on this spot. Red brick Tudor, harking back to England’s grandest 16th century homes, such as Hampton Court Palace, would be the basic inspiration. 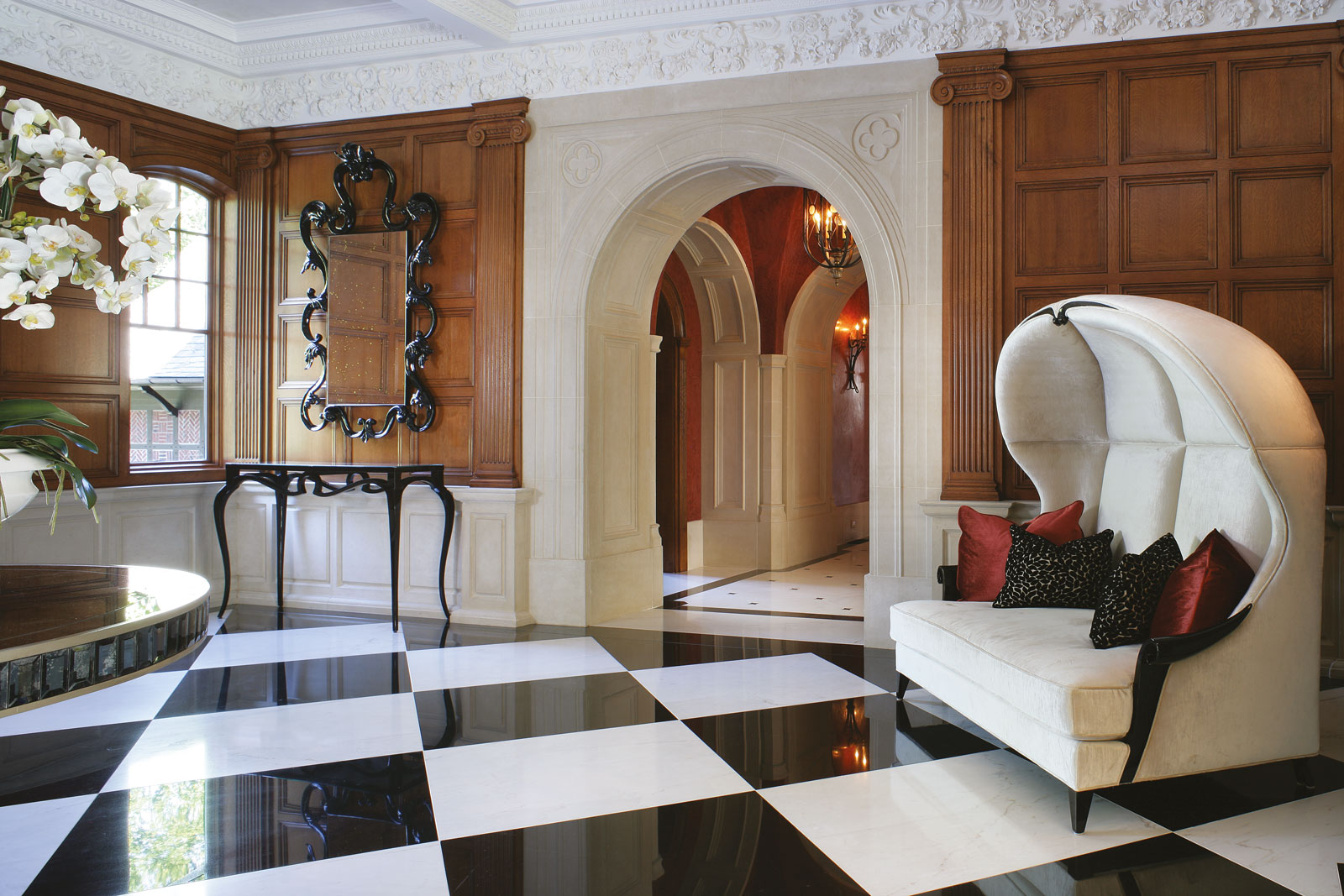 A checkerboard floor of outsized marble slabs commands attention in the entrance hall. The walls consist of a cast limestone dado, fielded wood paneling and a hand-cast plaster frieze, all designed by architect Michael Jay Wallin. A sinuous console and mirror, along with a hooded loveseat—Christopher Guy’s take on the traditional English hall porter’s chair—draw the eye without competing with the architecture.

The architect, Michael Jay Wallin, is known for his meticulous interpretations of historical styles. Typically his clients end up paring back some details, wary of the army of stonemasons, plasterers and other craftsmen that would be needed to execute his hand renderings to a T. But not on this project: Wallin met his dream clients, a physician and his wife, who gave free rein during the construction process. The results of that free rein are immediately apparent as you approach the front entrance. A banded archway surrounding the door is elaborately carved in limestone, a sign that no detail was spared. 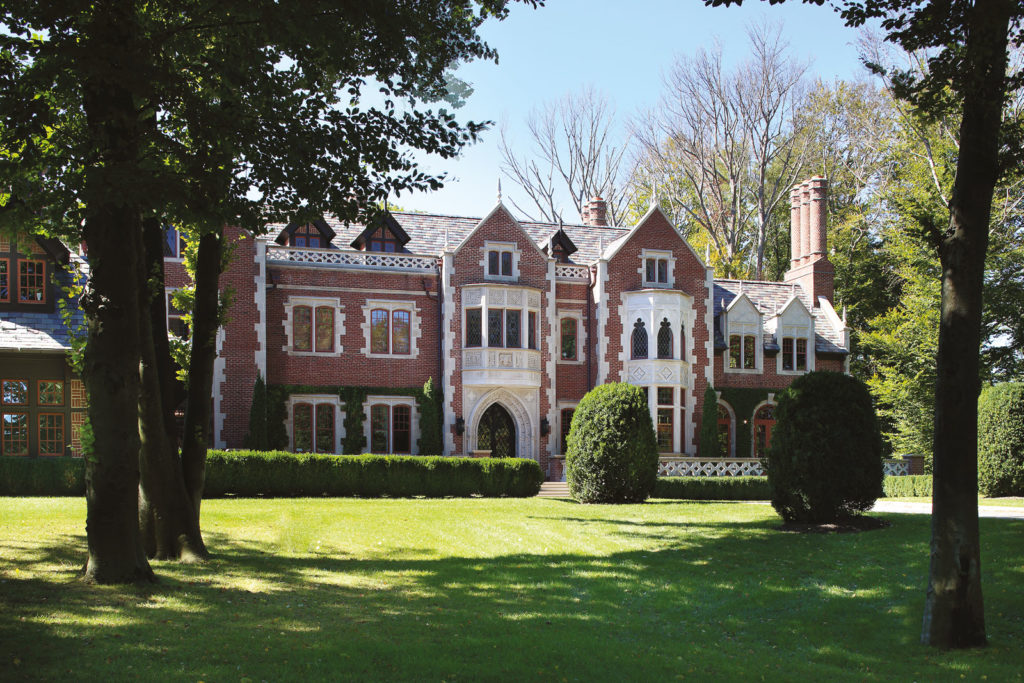 Gothic flourishes adorn the entry front of this new Tudor.

Like the original Tudor palaces of England and the Tudor Revival homes that dominated American domestic architecture a century ago, this home represents a medley of late medieval and early Renaissance styles. Wallin has pushed the medley toward its limits, freely borrowing precise historical details and combining them in novel, fanciful ways. The entranceway is pure gothic, but step into the entrance hall, and you feel vaulted centuries ahead. The floor is a black-and-white checkerboard of marble, astonishing for the huge size of the slabs. The walls are a riff on Stuart interiors of the 17th century, with honey-colored wood joinery and rich plasterwork. Surmounting the space is a soaring, coffered dome, a Palladian touch that brings to mind the rotunda of the U.S. Capitol. 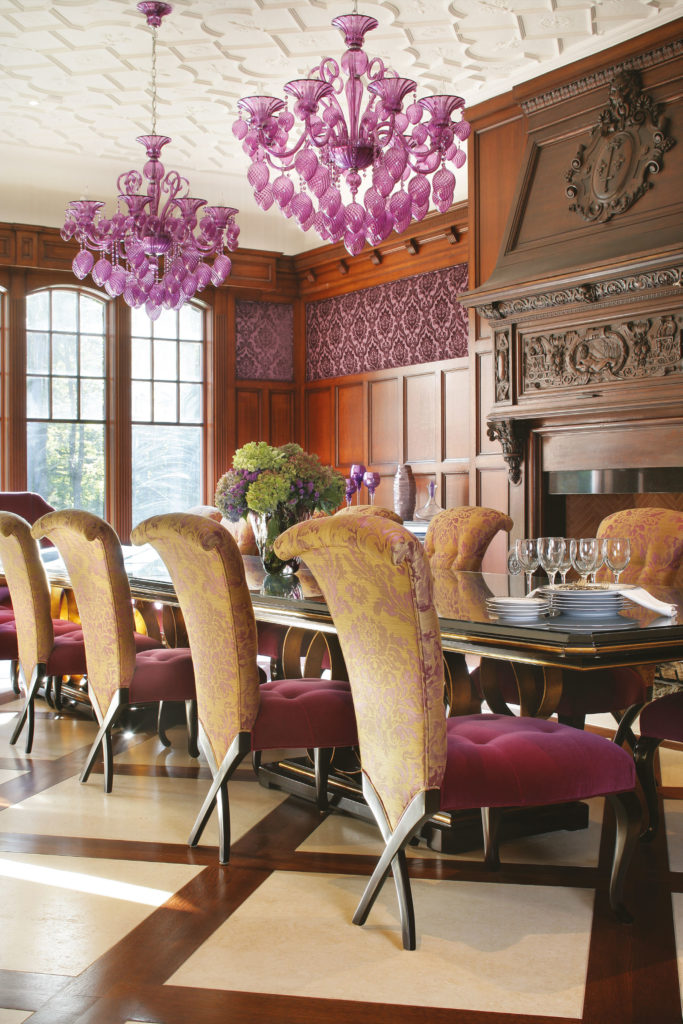 Like all Tudor houses, this one is a medley of historical styles. But here the architect has combined period details in inventive new ways. 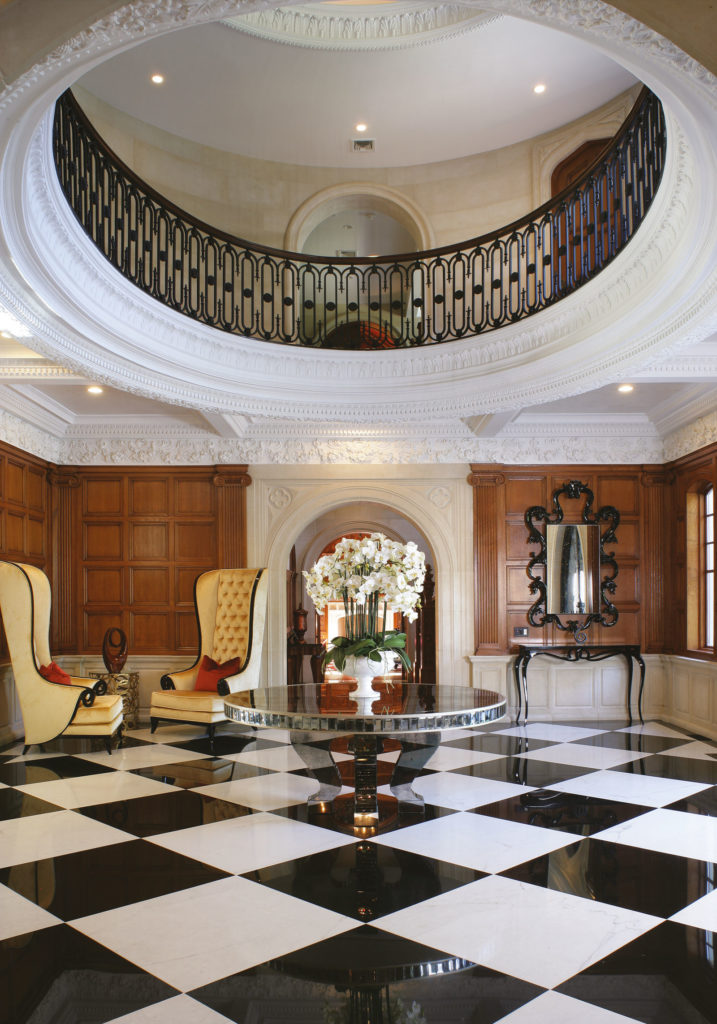 A mirrored center table in the entrance hall is so highly reflective, it creates the illusion of being transparent. The pair of high-backed wing chairs seems to have been spirited from the set of Alice in Wonderland.

Elsewhere in the house and outside, the fantasy continues. In its basic form and materials, the pool house is tied to the Tudor mother ship, but a sweeping, curved roof gives this jewel box the look of a pagoda. Japanese maples surrounding the pool and a Zen-like waterfall reinforce the Asiatic flavor. One could be visiting a Shinto shrine, or Kew Gardens in London, or the Arts and Crafts homes of Pasadena in the 1910’s. Such is the transportive power of original architecture and landscaping. 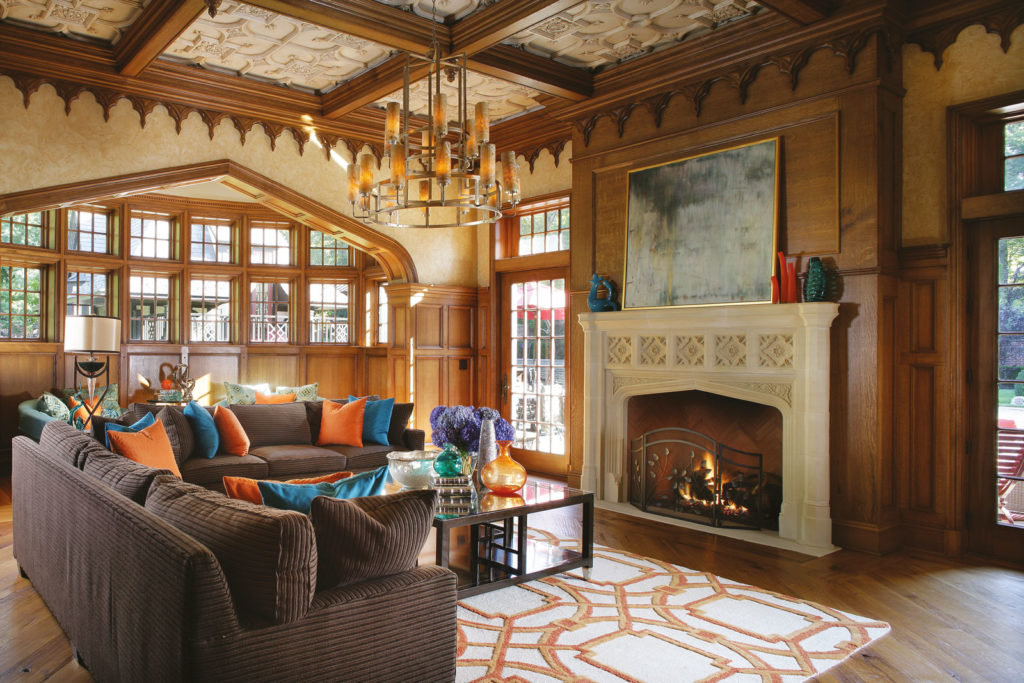 In the light-filled family room, orange and teal accents keep the mood light. 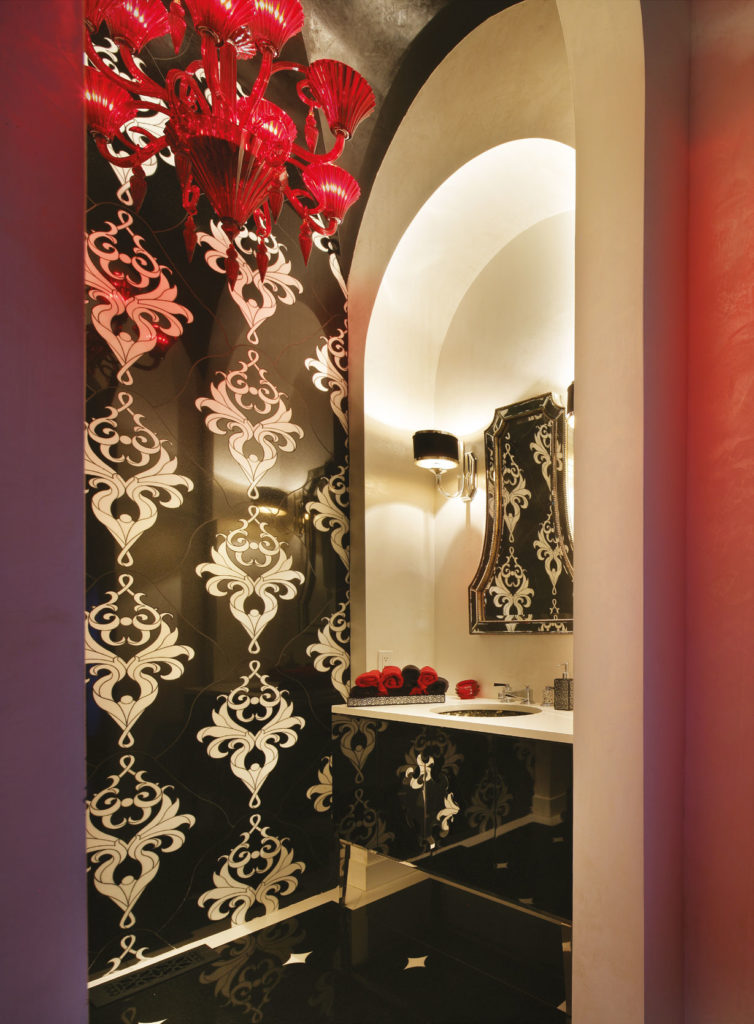 In a first-floor powder room, guests are greeted by laser-cut marble walls and red-glass light fixtures.

How does one fill such a richly detailed traditional home? In keeping with the wit and whimsy of the architecture, the homeowners decided the furnishings should provide a foil to the historical surface detail. Teaming up with interior designer Keith Murphy of Safavieh, they went modern with most of their choices. The dramatic furniture of Christopher Guy, known for his curvaceous shapes and dressmaker details, takes pride of place in the entrance hall, dining room and other public spaces. “If anything, these pieces add to a ‘wow’ index that was already high,” notes Murphy, “but they also lend a light, playful touch to rooms that might otherwise feel monumental. Our goal was to make a very stately house feel like a home for relaxed family living. With carefully chosen furniture, we accomplished that.” 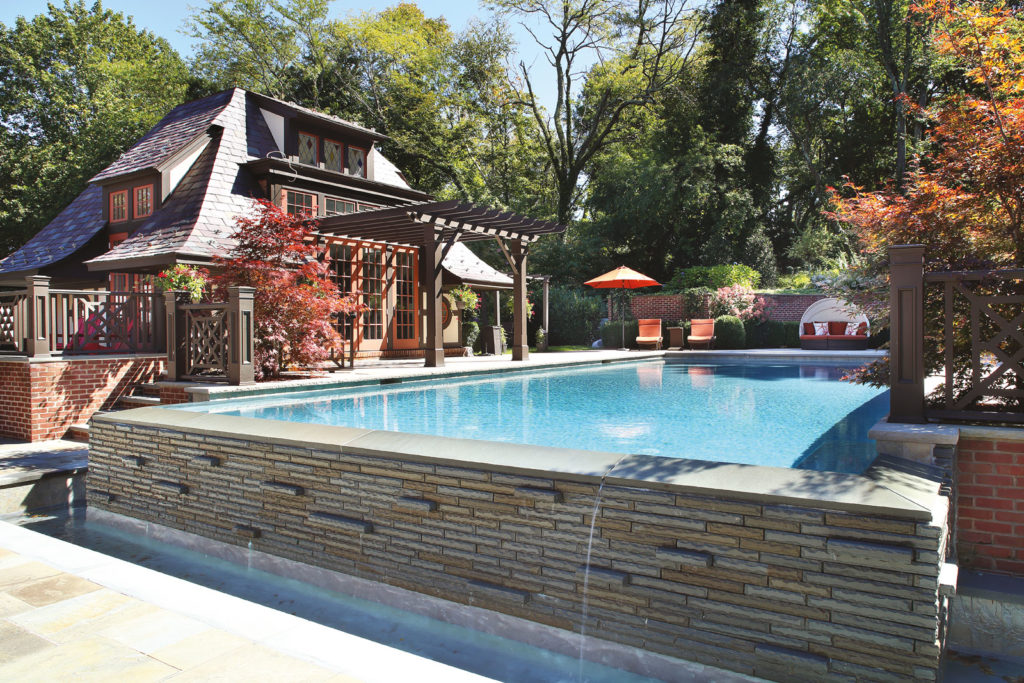 While the pool house is tied architecturally to the main house, the addition of Japanese and Arts and Crafts elements give it a jewel-box feel. 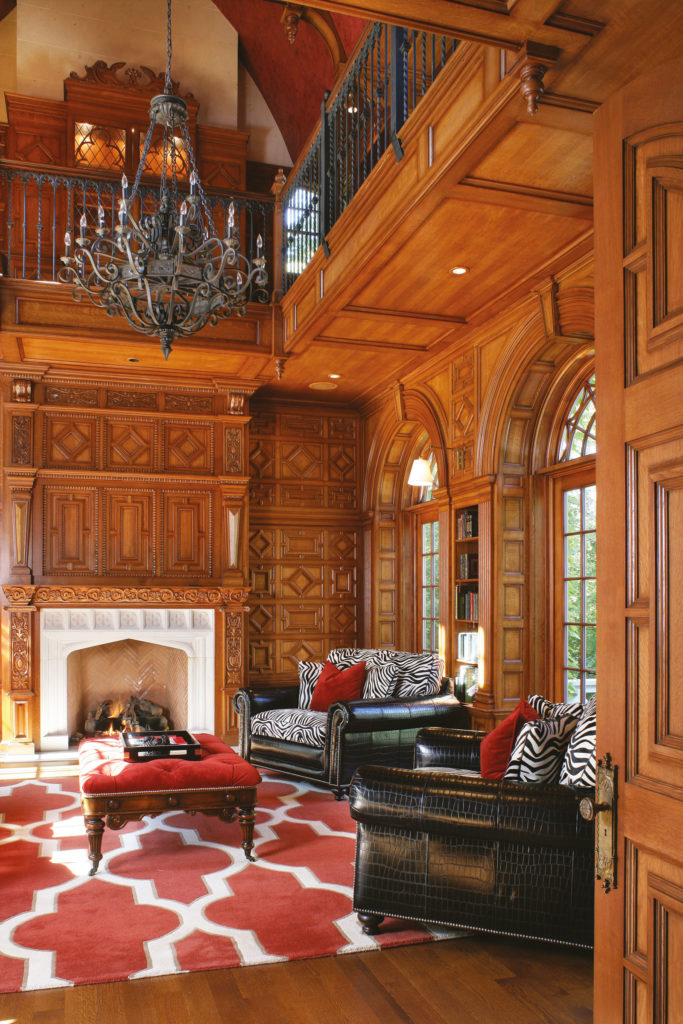 The library is a tour de force of handmade oak paneling.