In this fullfloor apartment at 10 Sullivan in SoHo, spectacular views are ust part of the appeal. 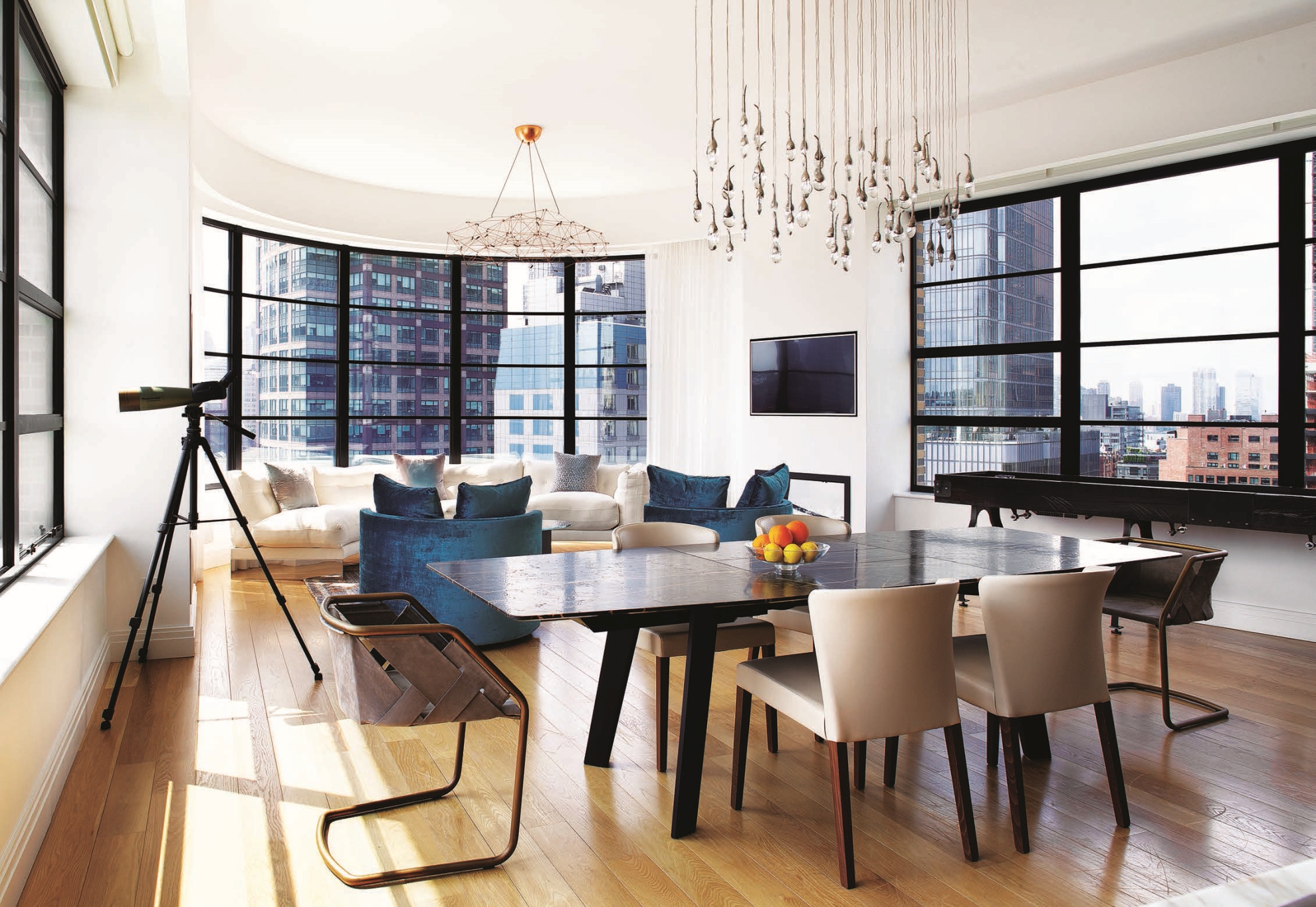 High ceilings, huge windows and a curved end wall lend drama to this aerie-like apartment in SoHo. A shufﬂeboard table and a Celestron telescope hint at the owner’s funloving style. 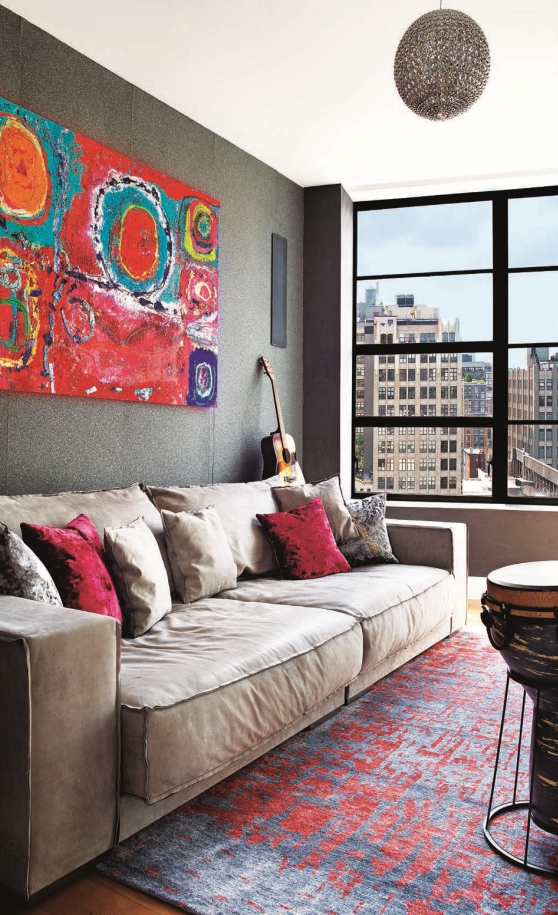 The music-and-media room is designed for versatility. Deep and massive, the suede sofa is perfect for kicking back, while the multi-media canvas by Brooklyn artist Mark Demos and the disco-ball-style Swarovski pendant set the stage for high-energy parties. 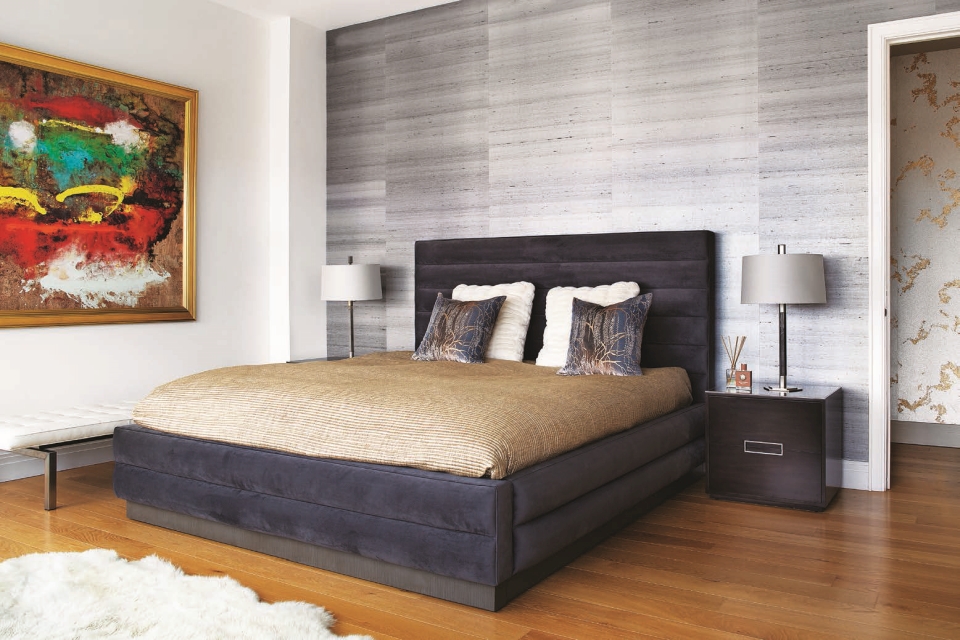 In the master bedroom, restrained, masculine style is the perfect foil for a vibrant painting by Jamali, whose style has been called Mystical Expressionism.

In Manhattan, where every square foot of land is precious, architects can be quite ingenious about maximizing a tight footprint. The current trend is to build skyward, as the needle-like residential spires rising along the southern border of Central Park attest. But down in SoHo, where new buildings top out at a few dozen floors, the challenge more often concerns the street grid. Diagonal cross streets make for some odd-shaped lots.

One of the best new creations to grace a slivered building lot is the wedge-shaped tower known as 10 Sullivan, located at the convergence of Sixth Avenue and Sullivan Street. Architect Cary Tamarkin says it’s not a homage to the Flatiron Building, and the point is well taken, for Tamarkin’s wedge is far slimmer and more pointed.

The full-floor apartments on floors six through 11 are architectural gems in their own right, and they have the further attraction of unobstructed views in all directions. Each home literally offers a window onto some of the city’s best architecture. The setting was irresistible to a young surgeon who loves to entertain. “

Although he’s a bachelor and lives alone, his philosophy was that the whole apartment should get use,” says Christina Todd, an interior designer based at Safavieh’s SoHo showroom and design center. “He also wanted to make it fun, playful and relaxed for visitors. We made sure that each room has its own purpose and character.”

For example, the third bedroom and bath specified on the building plans were 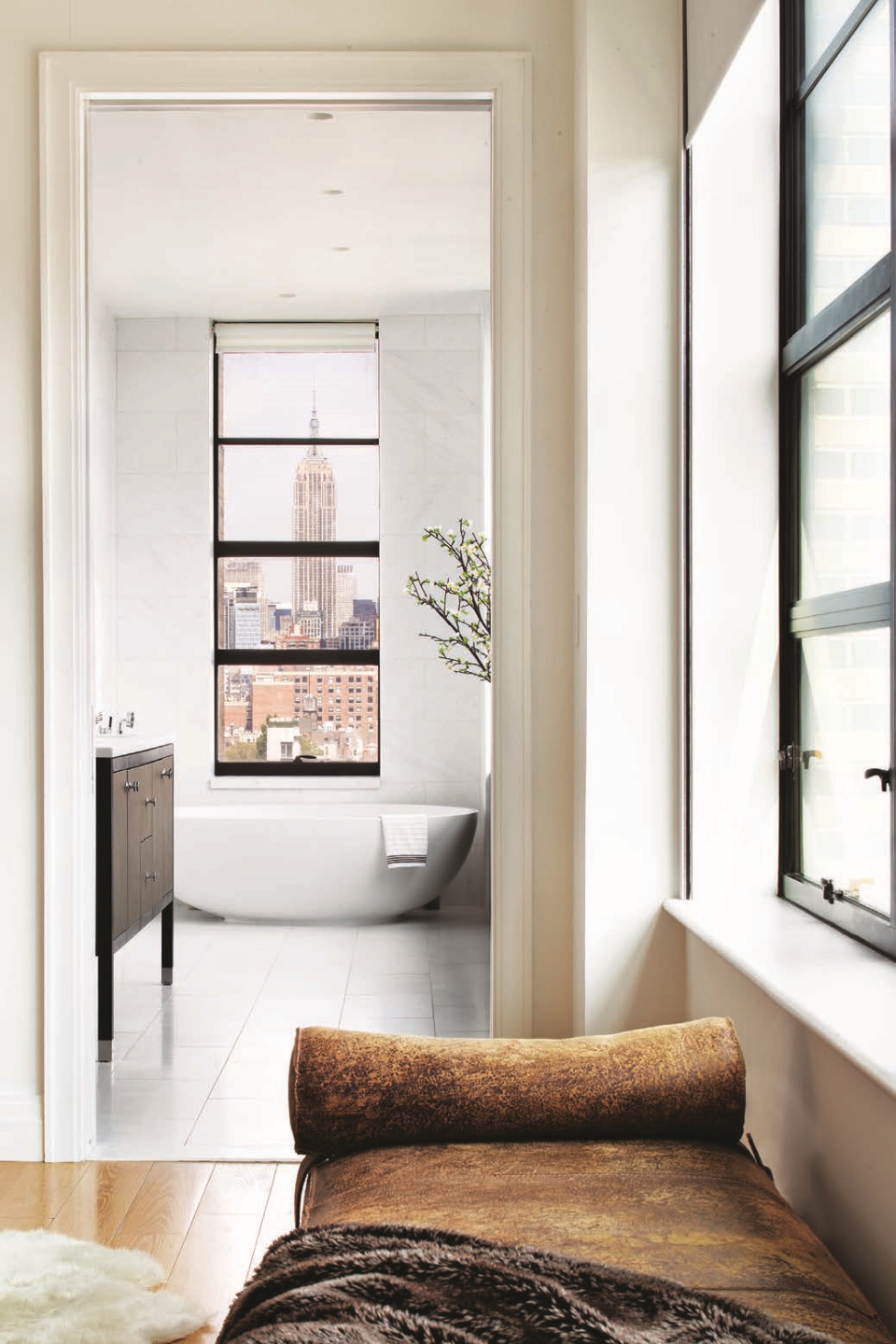 With 3600 views, the fullﬂoor apartment looks out on numerous New York landmarks. A bathroom window frames the Empire State Building .

repurposed by the homeowner into a media-and-music room and an adjacent, northfacing office. The former is endowed with suede-covered walls and a massive, deepseated suede sofa, which give the space the air of an intimate theater. It’s great not only for watching movies or TV, but also as a live performance space. Guitars, drums and other percussion instruments are strewn about, ready for impromptu jam sessions.

The main space is divided into sitting and dining areas, each graced by sculptural Modernist chandeliers. A curved sectional sofa by Thayer Coggin, a substantial and luxurious presence, hugs the curve of the end wall. But there is nothing formal about the mood, and it’s lightened by the presence of a Celestron telescope and a shuffleboard table. “I liked the idea of shuffleboard,” says the homeowner, “because all I need is one guest to play the game and have fun.”

Each room has a restrained palette punctuated by a vibrant pop of color. “The scheme came from the views and the sky,” Todd explains. “Through the windows you see the muted colors of hundreds of buildings, as well as the brilliance of the sky. The sunsets over the Hudson are especially amazing. We simply echoed this in the interiors to evoke ultra-modern, pure luxury.”